You are here: Home › 40K › Tactics › Irontau: Fun with Battle Brothers by Anonymou5 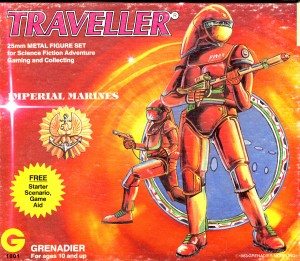 Anonymou5 brings us Irontau: Fun with Battle Brothers. As usual, check out the Tactics Corner for more in-depth tactics, lists and strategies!

For the record, this is just theory hammer.  I don’t play Tau, and when I’m feeling the mood for power armor, I run the Rout.  My Marines don’t follow some silly old book and they’re always drunk.

I think we’re all familiar with the “O’vesa Deathstar” or the “Ripstar.”  However, just in case you’re not.  It’s a Toolbox Commander and the Independent Character Riptide attached to a normal Riptide.  This gives you two twin-linked, ignores cover, monster hunter/tank hunter Riptides with hit and run.  It’s obviously an extremely powerful unit.  A version of that unit won the Nova Open.  However, I think there’s a more powerful version of this unit.

Toolbox Commander, Riptide, Chapter Master.  In short, you trade a few turns of Riptide firepower for added assault capabilities.  However, you also gain “Army Support” value.  The interesting thing about this unit is that it works well for both a Tau Primary and a Space Marines Primary Army.

In general I would build it with a Chapter Master on a Bike (Iron Hands obviously, if running Tau Primary), a Riptide with two Drones (to make sure you maintain majority toughness 6) and an Iridium Armor Toolbox Commander.  If you’re really worried about Grav Weapons, you could give the Commander regular Armor to grant majority armor save of 4.

So turn 1, the Chapter Master and Commander start attached to the Riptide.  In this turn you can shoot both a 72 inch range Ion Accelerator and an infinite range Orbital Bombardment.  They will both be twin linked, ignores cover, tank/monster hunter (as needed) and they don’t have any cares about night fight whatsoever.  That’s a pretty insane alpha strike.  That’s a pretty good chance of instant killing Fateweaver or a Daemon Prince.  It’s a good way to prevent your opponent from shooting off his serpent shields.  It’ll even put a solid dent in a horde.  It’s quite the opening salvo.

From there you have a few options.  You can keep the unit together and advance, or you can break them up and spread out the love in a variety of ways.  If you keep the unit together they can advance to midfield and engage targets as needed.  The Riptide can keep shooting, obviously.  The Chapter Master can hang out until he needs to break off and go smash something.  If he stays in the unit, you never have to worry about picking Stubborn, because you have And The Shall Know no Fear.  This is a big deal against Daemons, who are generally capable of catching a Ripstar.  The unit actually moves pretty fast, if you leapfrog it.  The Chapter Master moves 12 and takes the lead, then the Tau units Assault Move past him (with either the Riptide or the Commander in the front, depending on who you want to tank).

The unit can get really silly.  It can sit at midfield and plink away.  If something charges it, it can break out with Hit and Run (testing at I5), then the Chapter Master can break off from the unit and charge back in while the Command and Riptide go on their merry way.

Obvious Synergies for a Tau Build

Using this unit offers a few advantages over a traditional Ripstar (or Eldar allies)  for a Tau Army.  The first is obvious, you have a Chapter Master.  He can put out fires wherever needed.  I’ve beaten plenty of Tau Armies by getting a Daemon Prince or Fleshound squad into their backfield.  The Chapter Master can easily step to a Daemon Prince, and has a decent chance of smashing a whole pack of Hounds (especially if he gets the charge).  It also offers you an offensive unit.  If the IronTauStar moves to mid field, he can break off and threaten your opponent’s backfield.  He is a threat that MUST be dealt with.  After he pops his orbital bombardment, he can roam your backfield alone or he can advance alone.  He could also go forward and join a Kroot squad, turning them into an unbreakable speed bump.  He is a mobile problem solver that handles things a Tau Army cannot easily handle otherwise.

Another huge plus for a Tau Army is that the Chapter Master brings Biker Troops.  At a minimum these guys work as mobile scoring.  They’re not as fast as Eldar Jetbikes, but they’re slightly more durable, better in a fight, and they’re at least comparable at shooting.  You can give them Melta, and have a fast moving, scoring, anti tank platform.  You can give them Grav and go Monster Hunting (and add the Chapter Master if needed for more punch).  Just like the Chapter Master they have the ability to intercept fast assault units and protect your gunline.  They can shoot down specific threats.  They can turbo boost to objectives.  There is literally no downside to these guys in a Tau list.

You also gain access to a Thunderfire Cannon.  Tau don’t have Barrage organically (not really, SMS is good but limited range, and the upgrade on the Commander doesn’t count).  The Techmarine can provide boosted terrain for Broadsides to utilize, and the Thunderfire can snipe out Heralds, Bikelocks, etc.   Plus against another Tau build, all those pinning checks can be the difference between victory and defeat.

A Chapter Master, two squads of Bikes, and a Thunderfire is nothing but value added.  They fill holes in a Tau Army, and have no downsides.

Obvious Synergies for a Marine Build

The Toolbox Commander is instant win with any unit.  Attach him to Sternguard and have twinlinked, monster hunting, ignores cover, wounds on a 2 bolters.  That’s ridiculous.  One squad of Sternguard can kill a Tervigon in one shooting phase.  You can attach him to Centurions and tank wounds (plus the obvious twinlink/ignores cover).  He can bounce from unit to unit as needed, and increase your lethality dramatically.

Kroot offer the same upside to Space Marines as they do to Tau.  First and foremost, Infiltrate is one of the best rules in the game.  With scouting Dogrush builds and White Scars Armies everywhere, it provides you an additional turn of breathing space.  Infiltrate is outstanding.  Kroot bring cheap sniper rounds to the match and the ability to outflank onto the objective on top of everything else.

Finally, Broadsides are still available in an allied detachment, and I don’t think I need to waste any space discussing how effective they are.

For both sides, modeling opportunities abound.  I have a friend who plays Salamanders, and he is building “Ad Mech Advisors” to run this deathstar.  He’s using a third party Dread Knight with an Ion Accelerator for his Riptide.  He’s heavily modeling a Terminator to turn into a Commander.  He’s taking Necron Warriors, giving them Kroot Rifles, and slapping a bunch of Imperial Logos on them.

For Tau, you can use Tau Jetbikes to make Space Marine Bikers as seen here.  (scroll to the bottom of this link for an example)

Plus, and here’s the most important part, you can use a Lightsaber to represent your powerfist/thunder hammer on your Chapter Master.  Let me say that again.  A lightsaber.  It’s fluffy enough, a “Tau” unit built for close combat; using that fancy tech.  Call it a focused Ion Blade.  Done.

You get a powerful deathstar.  A game winning alpha strike.  Awesome synergies to fill holes in your existing army.  And, potentially, a lightsaber.  I feel like a properly built Tau/Marines or Marine/Tau build is stronger than Tau/Tau or Tau/Eldar.  When my buddy finishes his “Admech Advisors” I’ll be sure to post them; because it will be awesome.   Well, as awesome as sober Marines can be anyway.

27 Responses to “Irontau: Fun with Battle Brothers by Anonymou5”