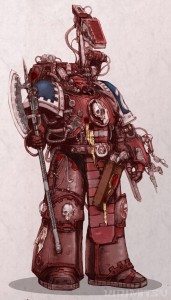 Up for review, the Techmarine! For more reviews, lists, bat reps and tactics, check out the Tactics Corner.

The Techmarine, like the Master of the Forge, is a battle brother of a Space Marine chapter that straddles the line between the Adeptus Mechanicus and Adeptus Astartes. He is both a potent fighter and in tune with the Machine Spirits of the Chapter’s vehicles. 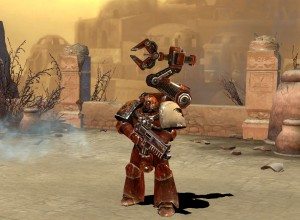 The Techmarine is very, very similar to his big brother, the Master of the Forge. In fact, he’s so similar that this review is going to be very brief as his function is almost identical. The primary difference is that he has further limitations on wargear (no Relics or Conversion Beamer) and 1 less wounds, WS and LD8. He’s expensive, fragile, and there is almost no reason to take him over the superior Master of the Forge. He weighs in at half a Thunderfire Cannon, +25pts for the Servo-harness.

By and large, read the Master of the Forge tactics to understand how to play a Techmarine. The primary difference here is that you pay almost the same amount of points (15pts less) for a model with lower stats and only a single wound. He is pricey for what you get and honestly, not worth it. He does bolster a unit fairly well but not for the price tag.

The only reason to bring this guy is in a themed list, for superior vehicle repair capability (but for his points you could just take another vehicle), and that’s about it. Not much of a compelling reason in a competitive list and you will most likely never see one in a tournament.

A fun little unit though, is the Geek Squad! Take 2 Masters of the Forge and 2 Techmarines either on foot with 5 Servitors with Servo-arms as a goofy, yet hard hitting assault squad. Or, take them on bikes and have a hipster, techno biker gang unit! Haha, again, not even remotely competitive but that would look awesome if converted up and it actually does pack a punch. Stick a Shield Eternal on a Master of the Forge to tank wounds (all 2 of them!) stick them in a biker squad with Grav Guns and a Multi Melta and you have a pretty ludicrous unit that is actually a lot of fun. Just don’t expect them to do a whole lot.

In short, if you want this type of model, spring for the extra 15pts to get the real thing: the Master of the Forge.

Edit: And, as folks pointed out, he doesn’t take up an FoC slot, so he has that going on. However, haha, I still think he sucks! Prove me wrong though, in the comments section and I will happily redact my opinion. Granting Chapter Tactics is the only saving grace I can see here!

Edit: Fluger suggested paying the 50pts for an ultra cheap ally to add ATSKNF to a unit of say, IG, and also getting an improved  cover save that can fix a nearby vehicle. Not bad!