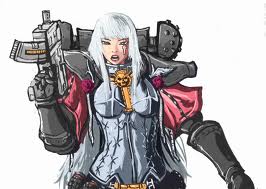 One of our customers brought in a digital codex, and here are the first thoughts on the dex.

So, caveats first: I have not really dug into this book yet, this is just my first thoughts after having read through it quickly.

First of all, there are some big changes! This isn’t just a digital version of the book or a supplement, this is a full blown codex with a color section, fluff, new wargear, points value, rules, etc.

Second of all: Sisters are good. Really good and they are gong to upset the hell out of the meta.

Comdemnor Boltguns. Holy. Crap. This 10pt weapon is 24″, assault 1, Strength 5, AP-, and, wait for it, any unit HIT by this weapons suffers Perils in the Warp….my god! Screamerstar just crapped its pants. So did the Seercouncil, and any Psychic model in the game. Great Gonzo’s nose that is crazy! Any character with access to the Ranged Weapons section of the armory can take these weapons and that is pretty much every Character (including sarges) and Command Squads can pack 5! Wow. That just made every psyker in the game a liability if you find yourself facing Sisters. Eldar get some cushion with Ghost Helms, and FnP still helps, but these are straight deadly. Even overwatch is scary! Taking these liberally throughout an army is going to just shut down enemy psykers.

Some of the other big changes: Faith. Now, faith is a once per game Ld check that if failed means it doesn’t work and you can’t try again. Pass, and you get a cool power for that phase. Taking a Simulacrum lets you use faith twice. It’s a big change and it makes getting faith more reliable but less frequent. A lot of the same ones are there (Rending shots, increased strength, etc.) and you can take the Simulacrum in most units for only 10pts, so you can have a lot of Acts of Faith if you want to. There are lots of ways to increase the odds of getting Faith off too, such as Auras from Characters that allow you to reroll the test or test on your Warlord’s LD, etc.

Celestine got nerfed, but that is a good thing, IMO. She way way OTT previously. She now can only get back up once, but the odds of her getting back up are better (Act of Faith, aka, LD test) and she gets up with full wounds. Fair trade and fair nerf, IMO. Slap her with some Seraphim as per usual, and profit.

Shield of Faith is now 6++ AND +1 to Deny the Witch (Adamantium Will). Nice! Most units have this which is pretty awesome.

Battle Sisters are only 12 points! Wowzers and you can take units of 5 now, not min 10. Plus, at 5 strong, you can take 2 Specials or a Special and Heavy weapon….damn, son. This ties in well with Immolators which are only 5pts more than a Razorback but have Shield of Faith and can take a Twin-linked Multi Melta for free. That is a powerful, cheap transport right there. I think Immolator spam with dual Special Weapons and Condemnor Boltguns is in our future….6 units of 5 Sisters each with 2 Melta, a Comdemnor and a M.Melta Immolator is only 900pts! Mis it up with Flamers as well and holy cow.

Seraphim are a measly 15pts, same as a Grey Hunter and they have a slew of special rules including Hit and Run. They are excellent again, this edition. Plus, they can reroll failed invul saves from Shield of Faith and they can give themselves Shred with shooting through their faith. Not bad at all.

Jacobus is beastly! Wow is he good. For the price of a Thunderfire Cannon you get a LOT. First of all, he gives his unis a 5++ so long as they have Shield of Faith (which is rerollable by Seraphim!) and he himself grants Zealot, a bonus Act of Faith for his unit, Martyrdom (allows all units comprised entirely of Shield of Faith models to auto pass ld tests when he dies) and, wait for it, a 12″ aura that gives all friendly models Fearless and Counter-attack….wow. Think about that with big units of Sisters or IG blobs! Plus, he (and all priests) have War Hymns that allow them to grant impressive bonuses to their unit. On a successful Ld test, the character can grant his unit and any attached characters rerolls of all failed armor and invul saves, give himself Smash, or give his unit Shred. WOW! That is ballin. You can combo this with a Relic called Litanies of Faith that allows you to auto-pass these tests….boom! Holy crap! Permenant Fortune while in combat with a Fearless unit of 20 bodies? Yes please. Toss in a EW (Mantle Relic grants this) Cannoness with a 4++ or Celestine and you have a resilient little tank and Tarpit. You could also stick him with Repentia and make them decent so long as you can get them into combat where a 5++ reroll is fairly solid. They are certainly a lot better than they were. An assault vehicle would have helped a lot here, but oh well. They do get a 3+ FnP with their Faith and Jacobus lets them do it twice, so if you can actually get them into combat, they can be surprisingly tough and with each still packing an Eviscerator, they pack a punch. Also, taking him with Crusaders in Battle Conclave is nuts, rerollable 3++ on a unit is just savage. Toss a Canoness with Litanies of Faith and an Eviscerator and you have a pretty solid unit.

The Cannoness is still a cheap, versatile HQ that grants Hatred in combat with her Faith. She grants Stubborn too, which is awesome. No more 2+ which stinks though, and it seems like no Jump Pack either? Bummer there unless I am missing it. 30pt Eviscerator is rough, too. That’s pricey for a Str3 model, but not too crazy.

Some of the Warlord Traits are awesome such as a 12″ Stubborn bubble!

Penitent Engines are actually not bad. Rage, AV11, 3HP, and hit hard, but only In 3 is a bummer and Open Topped isn’t doing them any favors, either. But at 20pts under a T.Fire Cannon for 1, with units up to 3, not bad. 5 attacks on the charge at STr10 is solid. Exorcists are better, but hey, these aren’t terrible. Shield of Faith helps, too.

The Exorcist is still bad ass and cheap. D6 AP1, Str8 missiles on a Predator Chassis with a 6++ and Adamantium Will, for 25pts over a T.Fire Cannon? Yeah, all day.

They fixed the Crusader/Death Cult power weapon issue and just gave them Power Swords flat out as expected. Still a great unit but not so insanely under-priced as before.

Dominions are still ballin. They can take 4 Special Weapons for 5 bodies and they can ignore cover with their act of faith. Not bad at all! In an Immolator spam list, these ladies certainly have a place. Scout too? Yes, ma’am!

Retributors are still fairly solid, Heavy Bolters and Rending is nice and Heavy Flamers and Rending is, too! Not being able to do it more than 2 times is a bit of a bummer, but they’re still dirt cheap. 5 with 4 Heavy Weapons is only a Thunderfire Cannon in cost! Wowzers! That is crazy cheap. With the Simulacrum they jump up 22pts, but still a steal. Stick them in an Immolator with 4 Heavy Flamers or sit them in the back with 4 Heavy Bolters and go to town.

Celestians still seem worthless to me. Educate me please if I am not seeing their worth.

There’s a lot more but I am tired (sorry for any grammar mistakes, too tired to proof this article) and just wanted to get the big points out there first. This is a powerful book with a lot of combos and when you take this with IG, yeah, the meta just shifted. The only limitation with this is, as always, the exorbitant price of the models. If you find a good substitute, or have the budget for the Nuns with Gun, you can build a seriously powerful army that can provide a punishing counter to many of the top tier lists in the game right now.