Capt’n Dees hits us with Game 2 of his GT winning performance from the Feast of Blades open! As always, check out the Tactics Corner for more great battle reports! 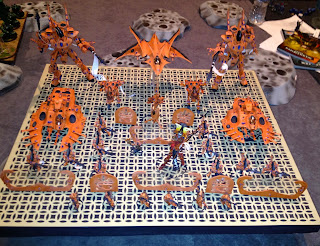 First take a look at how cool the army looks on that display board.  Each model has the bases matching and sunk into the diplay board.  I’ve tried doing this with my BA but this make my attempt look like a Kindergarten project.  It just looks fantastic.

I’m looking at his list and I’m looking that the mission and I’m feeling pretty good.  He’s got the fire power that I’m worried about those first turns and the wraithgaurd I don’t want to be close to with the D-Sythes.  Yet I have to keep his Wraithguard from getting the relic and possibly getting back into a Serp and flying away.  So one way or another I’m going to have to move to mid field even if I’m not looking to grab the objective right away.

The board we are on is nothing but hills, but the tournament was saying that all hills gave 4+ for being behind and 5+ on top, but were NOT area terrain and did not count as difficult terrain.

We won the roll off to go first and set up with most of his army in front, and his 3 big mamajammas ready to advance on my position. 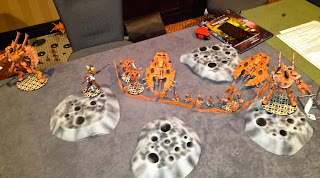 I decide I will leave my scouts and Thunderfire way in the back on a hill, and put the rest of my troops on my far left.  I leave the Command squad in the middle.  I figure I will let them soak up the firepower and try to keep the troops rolling through the left flank.  I also decide to outflank my flamer squad as they clearly aren’t going to good against anything but his soft rangers, so 2/3 of the time I should come out on the side to work on them.

For my scout move I just move a bit forward, keeping most of my troop bikes claiming a cover save from hills as he’s got some AP boo boo on the WKs.

Then I steal turn 1.  I think at that point we both know this game probably went from ‘probably in my favor’ to ‘heavily in my favor.’  Its like when you watch Texas hold em on TV and you see one guy has a good hand, one guy has a slightly better hand, then the flop comes and that better hand is now amazing.  Sure he could lose but the chances go way way down.

So now I pull forward to start blasting big guys and this is the end of my movement phase. 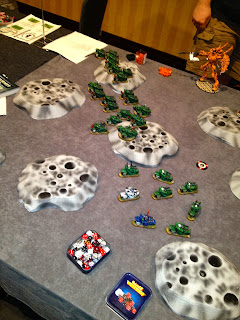 So the first thing I want to work on is the WK since he’s got no cover save.  He goes down to two squads worth of shooting.  In fact I had now had grav guns that couldn’t shoot at the Avatar because I thought it would take more to bring the WK down.  As it was with what I did have in range I brought the Avatar down to 1 wound remaining.

As if I could not be a bigger jerk I also had my blasts.  The orbital bombardment and Thunderfires ended up killing his War Walkers and glancing his left most Wave Serpent to death.

So I stole turn one and killed 1/4 of his army, but he kept a stiff upper lip and gave it a go.  His Wraithgaurd were out of range so they advanced up beyond the wall if I recall.  The rest of his fire pours into my command squad but I don’t think much happens due to armor and jink saves.  I think he did shoot some of my troops also and one unit might have even broken.

I continue to be a jerk as his Avatar then assault my troop unit on the hill.  With 1 wound left he risks being overwatched to death, but despite a few hits he makes his saves.  Then he gets ready to swing when I have to say ‘wait you are Init 1.’  At first I thought that was just the hill but that was actually open, so we biffed a few rules at the moment but thankfully the results were accurate.  It was actually from being Concussed by the Grav guns.  Also his assault through cover was not cover but he made it anyway, so it worked out though I feel bad that at the time the rules were mixed up despite it not really affecting the game.  I land two Grenade hits and he fails his armor save and dies.  Obviously I don’t want to be a jerk so I keep a straight face even though there are fireworks and parades going off in my head.  Matt was just having one of those games were everything goes wrong and the last thing you want to see is the guy across the table doing cartwheels.

My turn 2 and I think both Storm Talons arrive.  He quad guns them and like game one I only suffer a glance I think.  My bikes with flamers also arrive and do show up next to his pathfinders.  Between them and the Thunderfires I end up killing 5 pathfinders and the seer in shooting leaving one guy to stand around.  The fliers pepper his last Serpent and I think land a glance or two.  I can’t recall now if my bikes on the left shot/finished the Wraithgaurd that had no transport, but I know mentally I had concluded they were out of the game.  With their short range I was going to be backing up and shooting them at my leisure.  I think my one squad that had killed the avatar were able to make range on the last WK and pop a wound or two.  My command squad goes into CC, and with Prescience my Commander and Libby are able to finish him.

Matt’s turn 2 and his Hunter doesn’t show up.  His pathfinder jumps on the quad gun and shoots something.  I don’t even remember what at this point, I think he killed a Storm Talon.  His Serp scoots up to midfield and dumps the Wraithguard out next to my command squad.  They murder them with reckless abandon, and it wasn’t even like they were a little dead.  They were totally and completely dead 3 times over!

Matt say’s ‘there’s my morale victory’ and is ready to call the game.  We survey the board.  Clearly I’m going to kill his last pathfinder.  The Wraithgaurd are probably dead to a million grav shots.  Maybe the serp escapes but to what end?  At that point he’s got his Crimson hunter that can annoy me the following turn but realistically I fly my Storm Talon off the board so it doesn’t die and it kills the Hunter the following turn.  I would be grabbing the relic and tabling him in the next two turns with very little losses.

So this game ends even quicker than the first, with a 30-2 score in my favor.

In talking to Matt afterward he said he had some 40+ games of practice with the list, and the only losses he had were to lists that looked very similar to mine.  He handled the loss graciously and we agreed the steal was huge.   He said he might still not have won, but it certainly would have been closer, and I doubt I would have had the Massacre as well.  I jokingly suggested we had time to run it back but Matt said he had his fill of the Grav bikes so we shook on it and took a nice break before round 3.

My next game moved me out to table 1 to play Taudar!

Leave a Reply to anonymou5