Capt’n Dees hits us with Game 1 of his GT winning performance from the Feast of Blades open! As always, check out the Tactics Corner for more great battle reports!

So calling this post a battle report might be a bit of a misnomer, but certainly I can give a quick synopsis of my games.  I didn’t take a lot of pictures because I was worried about time, though this almost never really would have been a problem. 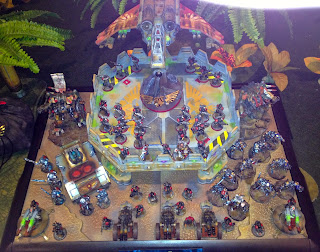 Now this game is the first of several and now a few days (and a quite a bit of beer) later so some of the details are hazy or possibly wrong so forgive my lack of details.

The board we were playing on was covered in forest.  It looked great but was pretty difficult to navigate around while playing.  While I wasn’t worried about terrain for the bikes we were using the Mysterious forest results and I was worried about those as some can be terrible.  As it turned out everything we identified were Ironbark or Spinethorn, so relatively good for cover and no ill effect.

I believe I won to go first and so deployed my bikes in a long row right on the 12″ line.  He set up pretty much dividing his force with all of his guard on or around his Skyshield, and then all of his GK off to the right.  I then decided I would scout my way to pull over to the IG and try to skirt as much shooting from his GK as I could do.  He didn’t steal and it was my turn 1.

I think continued to move my bikes up to concentrate fire on his IG.  I know they have a 4++ invul but they are still guardsmen and I wanted to try to think out some of those big guns.  Each Quad launcher is 12 (!) Str 5 small blasts.  The upside was I’d get armor and they had a min range so my plan was to close with those as fast as I could.

After movement I remembered to snap a picture. 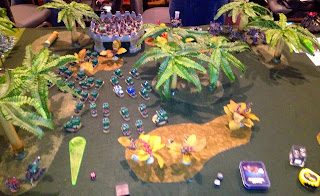 When all the ordinance and bolters (and even a few grav guns) were done I had obliterated his platoon and infantry squad (minus one I think was in the Vendetta) as well as commisar for First Blood and had taken a few bodies off several of the artillery (I think the two Sabre platforms on top of the platform got wiped) but not enough to stop the incoming shots.

His turn 1 and unfortunately his Termies rolled poorly and were not able to really advance enough to pummel my squads.  His Dreadknighs did shunt up and were able to fry most of my command squad, I think only the apothecary was alive.  His artillery did lay the hurt down.  I made a ton of saves.  Still I pulled a half dozen more bikes out spread between several squads but none of them were down for the count.

My turn 2 both Storm Talons arrived, and I positioned them in such a way that his Sabres under the Shydhield either had no shot, or would grant the 4+ save from the legs.  I sent my cheap flamer squad to charge the guns on the ground floor, and sent another squad to shoot at the Quad guns.  I thought that with them, the Storm Talons, and the Thunderfires I could wipe them out, but he still had guys to shoot two guns at me.   I poured Grav guns into the DKs and killed one out right, and I can’t recall if I killed the other one in shooting or combat with the command squad and was able to still back away from his termies.

His Termies turn 2 advanced better and his strike squad lept from the Razorback to pour fire into the command squad.  I had the 2+ commander up front and he took bullets like a champ.  I think he might have just died but only barely.  His Quad guns pummeled more bikes but with only two it was not as effective.  I think I lost one of my squads to the fire.  His Vendetta came in and shot at my StormTalon but only managed one glance amazingly.

My turn 3 and things started going really south for him.  I poured Grav guns into his strike squad and termies and just murdered them.  I think he had a few guys in each squad but not much, and of course I was still at a far charge range with cover in between us.  My thunderfires were able to kill the last of his Quad guns I think, and the vendetta died to the stormtalon crashing and killing most of his Infantry squad.  I can’t remember now but I think one of those 3 squads left might have even run off the board.

I dont remember if we played the bottom of the turn or not but about that point Michael was ready to call it.  He had claimed two Kill points but I had killed off most of his army.  There wasn’t going to be any coming back from it and even trying to stop the full Massacre would have been near impossible as I had Warlord, First Blood, and would easily claim linebreaker.  So this game went down for me with a 30-0 Win.

Michael was a bit down about his army list but I thought it was still a good list, just a bad matchup.  It is always hard to take a beating and then hear encouraging things from your opponent but I wished him well and caught up with him several other times during the event to see how things were going.  He ended up going 4-2 which is certainly respectable in my book!

Next up for me was Eldar!

← Ryan Murphy of Team Awesome’s Brawl in the Fall Tournament Report
One Chapter Master to Rule them All! →