Master of the Forge is up for review! For more in depth reviews and battle reports, check out the Tactics Corner. 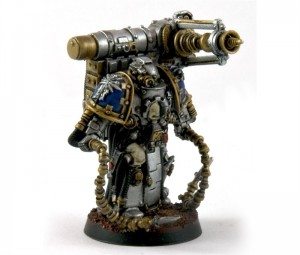 The Master of the Forge is an interesting mix of utility, combat ability and force multiplication. He strikes a nice balance between those roles and packs a decent punch both in a shoot-out and a fist fight. He is also quite the value, weighing in at a Thunderfire Cannon minus 10pts.

The Master of the Forge is a great utility HQ for his cost. He provides a little bit of everything while not excelling at anything.

The Master of the Forge is a moderate offensive character. He packs a decent wallop in a fight but he’s no Chapter Master or Captain by any means. However,  Strength 8, AP 1 melee attacks are nothing to sneeze at. His Servo Harness gives him an extra Servo Arm so he packs a solid 3 attacks in combat, 4 on the charge that will bring the pain with each hit. Also, that is why their is absolutely no reason to take the Power Axe unless you are taking the Conversion Beamer. The Servo-arm is now not an additional set of attacks but his weapon, so the Power Axe is superfluous. It swings at the same time with the same number of attacks but not as hard.

WS 4 is nothing to jump up and down about, but his BS 5 is pretty slick. With his twin linked Plasma Pistol (Plasma Cutter) he has a 35/36 chance of hitting, nice! As his Servo Harness allows him to shoot either both harness weapons (Flamer and Plasma Cutter) or one and one of his other weapons (Bolter and Bolt Pistol) he’s armed to the teeth! The Conversion Beamer is an interesting choice. If you are going to take the Conversion Beamer you take the Bike, too. No ifs, and or buts about it. You need the mobility of the bike to make the most of the Conversion Beaker which gets more powerful the further away from your target you are. The Bike allows you to do this. Played right, possibly taking two Masters of the Forge with Conversion Beamers, each in a corner of your deployment zone, they can form two powerful skirmishing units that fly around blasting enemy units and then provide solid counter assault. This is the only time you may want to take the Power Axe as it gives him an assault weapon as he gives up the Servo-arm attacks for the Conversion Beamer.

As for extra kit to give him, there’s not much call for anything else, honestly. Some of the Special Issue Wargear is solid as the Auspex in the right circumstances, or a bike for mobility, but typically you want to keep this unit cheap and efficient.

In terms of application, the Master of the Forge is fairly flexible. He allows you to play him where needed, on the fly. You can stick him in a unit of Tactical Marines and he adds a lot of punch in the shooting phase and assault phase. His 2+ means that he is fairly survivable and as he has 2 wounds he can serve as a poor man’s tank, soaking wounds. Typically you don’t want him in a challenge unless it is against a moderate opponent such as a Librarian, Chaplain, Farseer, Squad leader, etc. He is a threat with that Servo-arm, but lacking an invul save you need to be mindful of when he goes into the challenge or when sarge needs to fall on the sword to allow him to clean up some infantry. His Flamer also helps to add defense to a unit on an objective with improved over-watch, plus leadership 10 is always nice!

You can also keep him in the backfield, bolstering a rear unit and using his Servo-harness to fix vehicles and walkers or with a Conversion Beamer to add some nice firepower. If he is the Warlord, in this roll he is also going to be relatively safe. Speaking of walkers, his ability to unlock Dreads in both the heavy and elites slot is awesome for a fun, themed list, particularly with the Iron Hands Chapter Tactics (It Will Not Die for all vehicles and Characters), but unless you take all or predominantly AV13 Dreads, it is not going to be a particularly powerful army. Even then it will struggle, but will be fun and certainly look awesome.

He has the option to unlock a unit of Servitors however, these are not recommended in anything but a friendly list as they are poor at both shooting and assault and have even worse defense. Yes they hit hard but are easily killed and have only a single attack. Servitors will be covered in their own review but suffice it to say I wouldn’t take them in anything but a for fun, themed list.

His Bolster Defense ability is a nice way to boost your cover saves for backfield units. A lot of things in the game currently ignore cover so this isn’t amazing, but it is great when it does work. Just be wary of it granting your enemy a boosted save, too! Repairing vehicles and walkers is also nice, particularly if you are going Iron Hands to get the +1 to repair roles which combined with It Will Not Die makes for some very resilient units, particularly Land Raiders.

Some of the other Chapter Tactics are also nice, such as Salamanders. Twin linking his Flamer and letting him Master-craft one of his weapons. Rerolls against flame weapons is also nice when it is applicable. Black Templars makes him a little better offensively and +1 to DTW is always good as is Crusader. White Scars with Hit and Run and their bonuses to Bikes is pretty cool for him too, if he is mounted. Ravenguard CTs allow him to be sneaky (too bad you can’t give him a Jump Pack!) and Scout up along with any unit he joins.

That’s about it for the old Master of the Forge. He’s a solid, versatile, low cost HQ choice that has a place in a wide variety of Space Marine lists. The only real question you have to ask yourself is why would you take him over the other HQ choices? For me the answer to that question would be that I am running a mechanized army where he serves as a force multiplier by keeping my vehicles running longer. That or as a cheap-as-chips HQ that serves as a light combat character and fulfills my HQ requirement for minimal points while still adding a lot to a list that doesn’t need a heavy hitter in combat. Even tossing him in a unit of Hammerantors in an LRC isn’t bad as he meshes well with them, costs few points, and helps to keep that LRC going strong!

← BBF Brings us a BeakyCon3 Tournament Report!
Brawl in the Fall Pictures! →

Leave a Reply to Fulcrum