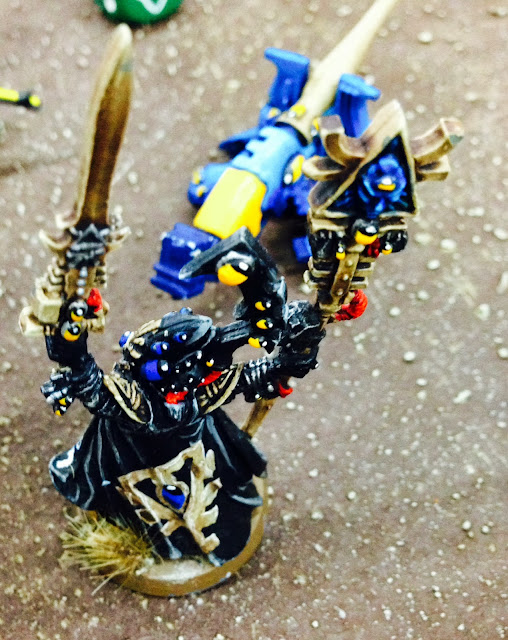 Guest Tournament Report from BBF from over at Terminus Est.

BeakyCon3 is finally over. The top four armies were as follows:

There were no eldar in the top bracket which was kind of surprising and there were definitely some very good eldar players present. Necrons and Tau were the top two races along with a strong showing for the Orks… Gork and Mork both are proud.

Armies were 2250 points, double FOC, and allies. Some Forge World (40k Approved only) was allowed. Each round was three hours and the majority of the games made it to at least the fifth turn… So time was not an issue The format was W-L with battle points to help facilitate rankings from round to round for Swiss pairings. We originally had 32 players for five rounds to produce one best overall winner (Marc Parker) with a perfect score of 5-0. Only one player dropped for the start of the second day.

All of the tables had a lot of terrain with some line of sight blocking… I think this really helped the top two Necron armies which both were heavy assault (i.e., Scarab Farm and Wraithstar). Line of sight blocking terrain balances sixth edition as demonstrated by these results.

Space Marines did not fare that well at BeakyCon3. I think it’s too early to draw any major conclusions in regards to the new Space Marines since only one month has elapsed since it’s release and I did not see a lot of the new units such as Centurions or grav weapons in general. Probably there will be more telling results by the end of the year at other major events.

We are already discussing how to adapt for next year such as limiting choices for any particular unit such as Wraiths or Annihilation Barges to four at most for elites, fast attack and heavy support. Of course there will be some new codices released between now and then so we’ll need to take that into account as well. Whatever we come up with it will be something special again that no one else can offer anywhere.

10 Responses to “BBF Brings us a BeakyCon3 Tournament Report!”