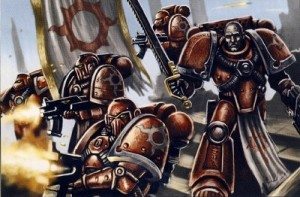 The Command Squad is up for review! Check out the Tactics Corner for more reviews, articles and video battle reports!

The Command Squads are formed from veteran Space Marines assigned as staff and bodyguards to high ranking members of a Space Marine chapter. They form a powerful and flexible unit per their fluff and largely match this on the table. 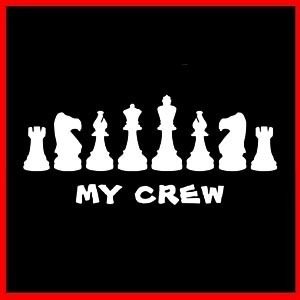 The Command Squad has been a great unit for many editions, now. They provide a tactically flexible unit that can be kitted out to really pack a punch with shooting or assault in addition to acting as moderate force multipliers. They are unlocked via any HQ choice besides Chapter Masters. They are a little pricey for a unit of essentially veterans and weigh in at the same cost as a Thunderfire Cannon base, but they make up for it with the amount of power they can pack in.

What a great unit! The Command Squad really does provide a ton to an army in terms of flexibility, power and cool factor.

In order to get the most mileage out of this unit you want to think about how this unit is going to fit into your list. You have so many options with how to build it that it really needs some focus in order to get the most out of it. The one thing I can say right off the bat is that for the love of the Emperor, do not equip them they way they are pictured in the book with a mix of everything! It may look cool but my goodness is that an absolutely terrible way to equip them. Totally inefficient.

In that vein, let’s start with what you should generally not take. First of all, do not waste any points on the Company Champion. He is really awful, unless you find yourself frequently playing against other MEQs whom are not geared up for combat, or GEQs that you can easily beat up on. But then, of course, you don’t need to put any more points into them as they quite easily win those fights anyway. For a more in-depth description of why the Company Champion is a bad choice due to his Honour or Death rule (forcing you to make or accept a challenge) read the Honor Guard review I wrote. Suffice it to say he is largely terrible and his only viable use is to fall on the sword in a challenge to free up your real heavy hitter character to clean up a unit.

The Standards are OK generally, but when you factor in the price of the Banner of the Emperor Ascendant and the fact that MEQs are really not that great in assault to begin with, and it pretty quickly falls into the “Do Not Take” category. It just isn’t worth it. The Company Standard is points efficient but with ATSKNF, why bother? They look cool, aren’t terrible but largely are unneeded.

The Apothecary is a solid addition to the unit. You sacrifice the equipment of a Veteran (and yes, we read it as the Apothecary can not take any other equipment), but at 15 points is a good investment. As his FnP buff effects any model that joins the unit, such as a Chapter Master, Captain, etc. it is a good option to consider. If he saves a single member of the unit, he’s done his job and in a pinch, he can go into a challenge to keep the heat off of your heavy hitters. Further, considering that against some units such as Heldrakes, etc. which may ignore your armor altogether, this could give you a save where you would otherwise have none.

As for the unit, essentially you can equip it to be very shooty or very choppy, or both, but then their price just spirals out of control and you start to get diminishing returns on the investment. Focus on one or the other. Again though from a purely efficiency minded perspective, when working with an MEQ statline going shooty is almost always going to be the superior choice.

If you do decide to go assault, Bikes is the clear choice for increased durability and speed. Yes, you can put them in a Razorback or Drop Pod setting up a later turn charge, but it just isn’t very efficient. Five bodies isn’t going to last long to any concentrated shooting and as such, you will seem them evaporate before doing anything. On bikes, they have the speed and increased defense (Tough 5 and Jink) to survive some of inevitable fire the unit will receive. The key when running them in an assault role is to not put too many points into them as they can rapidly go above Terminator cost and rarely will perform as well. Power Axes are nice as you get the bonus attack from the pistol, but you run the risk of getting smoked before swinging. Power Mauls are excellent too as the high volume of high strength hits will really put a hurting on dang near anything you assault plus they swing at I4. These are particularly good if you find yourself facing a lot of high toughness, love save targets such as Daemons who don’t care if you are AP2 or not. Power Lances are just awful, don’t bother. Power Swords are also largely crummy, unless you have Furious Assault with Khan, don’t waste your time. Even then, I’d rather have Mauls or Axes.

Storm Shields at 10pts a piece are fantastic, but will rapidly jack the cost per model up. With a power weapon and shield, they cost as much as a Hammernator but are not nearly as good. Add in the points of the Bike, and they are just too much for a single wound model. Taking 1 or 2 with a shield to tank wounds is solid, and a few models with weapons to do the killing. That is the way I would run them if I were to take an assault oriented Command Squad at all (which I wouldn’t, honestly). That way you stay relatively points efficient, are mobile, have decent offense and decent defense plus decent shooting with the bikes. Notice the running theme? Decent. Not outstanding at all, but not bad, either. One good tip though, is if you run a Bike assault oriented Command Squad, consider some Grav weapons not just for the offensive punch but also for Concussive. Lowering target Initiative not only makes it easier to win a fight, but makes it easier to stack other effects such as Blind from the Burning Blade or a Land Speeder Storm’s Cerberus Launcher.

Shooting though, now that’s the ticket. This unit geared up to put the smack down in the shooting phase will put a big smile on your face where the assault version will frequently disappoint you. As with almost all instances, give every model in the unit the same weapon to maximize efficiency. Yes, taking a variety of weapons gives you flexibility, but in practice units like this that hit very hard often only ever shoot once before being destroyed. They’re too high of a threat to be ignored. So, plan on them getting one critical shot off before being greatly diminished or destroyed. If they do anything more than that, consider it a nice bonus.

With that in mind, focus on what task you want them to perform. 5 Flamers makes them devastating to infantry, particularly with Salamanders Chapter Tactics to give them rerolls to wound. Meltas, obviously, make them deadly against tanks, heavy infantry, MCs, etc. Again, with Vulkan to twin link them, they become extremely reliable and should destroy any vehicle and many MCs in a single volley. Plasma are fantastic as a mid range weapon to destroy infantry, light to medium tanks and particularly, MCs. With Chapter Tactics such as the Ultramarines’ Tactical Doctrine to reroll 1’s (reducing the odds of overheating) and to increase accuracy, this unit particularly can be just devastating. Lastly, Grav Weapons are solid, but I would only take them on Bikes to make them Relentless to maximize their effect. Otherwise being 18″ Salvo weapons they just wont be all that effective. On bikes though, they make for a deadly and fast MC, Tank, and Heavy Infantry killing unit. The bike also gives you the option to fire twin bolters in the case you have a target the Grav weapons aren’t suited for, such as against Daemons. Be wary though, that if you are not on bikes, both the Plasma and Grav weapons will stop you from assaulting which should impact how you choose to deliver them and if you run an IC with them.

Whether or not to take an Apothecary in the shooty configuration unit largely depends on if you plan on running them solo or with an attached Character. Typically I would prefer to maximize offense with a unit that will often die quickly like this, but if you do plan on including a powerful melee unit with them, the Apothecary may be a good choice.

For the shooty unit you have a lot of delivery options. Rhinos, Razorbacks, Drop Pods and Bikes are all good choices in their own ways. Drop Pods make a ton of sense to keep them cheap and put them where needed but with Taudar everywhere, they will often get smoked before firing a single round due to Interceptor fire. If they have a tank character to absorb wounds it is a lot more reliable but still leaves you exposed and often unsupported by the rest of your army.

Rhinos and Razorbacks don’t give you the reach that Drop Pods do, but they do allow you to maneuver much more effectively and to stay mobile. Bikes give you a little of everything and at a really reasonable price point. What you choose to go with is largely a matter of taste and the role you see them filling in your list. For me, I prefer Bikes.

So there you have it! The command squad is a solid and flexible unit that can really pack a wallop and will be seen in many lists!

Leave a Reply to Alberto