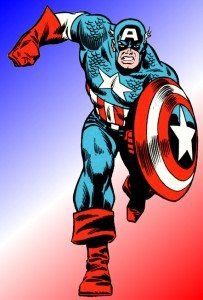 Up for review: Space Marine Captain and Space Marine Terminator Captain! As always, check out the Tactics Corner for more reviews and videos! These guys will be reviewed together as they are essentially the same model.

Each Space Marine chapter has 10 companies, each lead by a Captain. Space Marine Captains are second in rank and ability only to the Chapter Master himself, and potent fighters in thier own right. The Terminator Captain leads the veteran 1st Company and is typically the most experienced of them. Can they walk the walk? 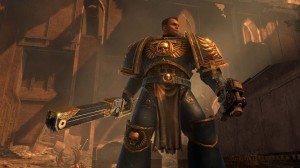 The Captain is a mainstay in Marine armies and an old favorite. He’s risen and fallen in power over the editions and I think now he’s found a niche. He isn’t the beatstick the Chapter Master is, but is cheaper too, and unlocks the command squad (as do Librarians and Chaplains) and also allows bikes as troops if he is on a bike. I feel that he strikes a nice balance in ability and points cost but that he pails in comparison to the Chapter Master or Libraian in a pure efficiency comparison. Speaking of points, he weighs in at a Thunderfire Cannon -10pts, and the Termie Captain is 30pts above that.

The first and most important question you should ask yourself when looking at a Captain of either variety is why are you taking him and not a Chapter Master who does everything he does, better?

That answer to that question will define how you equip him and use him, if you use him at all. The Captain lacks a wound and attack from the Chapter Master’s profile (3 of each) and lacks orbital bombardment. He is significantly cheaper (40pts cheaper for the Captain, 10pts cheaper for the Termie Captain), but, that extra attack, and especially the extra wound, are REALLY big reasons to take the Chapter Master. Orbital bombardment is just icing on the cake.

Why is that such a big deal? Because if you are making your Chapter Master the eternal warrior beef cake you should be making him, he is 33% more durable than the Captain. That means you get more mileage out of ever single point you invest into him as he will last longer. For example, abilities such as the Iron Hands, “It Will Not Die” rule (more chances to regenerate, more wounds to increase the odds of making your 6+ FnP), or the greater number of attacks to maximize Black Templars or Salamanders offensive buffs, etc. It also means he is less likely to be taken out in a single round of combat. He also hits harder which means you get more efficiency out of any special weapon you buy for him due to more attacks and him lasting longer to swing the weapon more times. Let’s not forget, he has the ability to lay down the Emperor’s Pimp Hand with Orbital Bombardment which can be game winning…but it can also miss and do nothing so we won’t weigh that into the equation too heavily.

Essentially, if you are taking a model to be your answer to assault it needs to be the most powerful assault model you can get because if it is not, you run the risk of being out-classed in a fight if you find yourself facing a more powerful assault asset across the table from you. The issue is that with even 1 wound, assault units hit at full power so if your opponent takes out your assault asset with his, he can then run roughshod over your units that are unable to counter it even when heavily damaged. Therefore, somewhat obviously, a Chapter Master with like equipment to a Captain is better. Period. Yes he costs more points but who cares? If he (or any similar unit) kills your captain in a fist fight and then goes on to eat several more units you just took a serious bloody nose. You stand to lose a hell of a lot more than 40pts.

Therefore, in my mind if you are looking to make an assault beat stick, the Captain is simply inferior and I would pass on him in that role every single time for the Chapter Master.

So, why would you take the Captain? For one, he unlocks the very good Command Squad which is a very powerful, versatile unit. Bear in mind, that the Chaplain and Librarian do the same thing, so you need to weigh his usefulness against theirs for that role. The Chaplain isn’t as powerful of a fighter but buffs the unit he is with and costs less points (and we’ll get into a full review of him in time of course), and the Librarian is again, less powerful in melee but is very flexible and cheaper. Personally, I would go for either of those options over the Captain as they’re special abilities and lower points cost outweigh the Captain’s modest melee ability (and in competitive play, we rarely see Captains because this is the same debate and the same answer we’ve been coming to for several editions of the game now). You can make a case for keeping him cheap and mobile as a non-primary assault model, but unless you plan on running him solo for some reason where his superior stats would make him the better choice, I would still prefer either the Libby or Chappy in that role as their buff to their unit  or debuff to the enemy will often more than make up for their lower stats. This now narrows the reasons to taking him down to just one for serious competitive play: he unlocks bikes. If you want a unit that unlocks bikes as troops and the Command Squad, which can also be mounted on bikes and is quite powerful, the Captain is your guy. Outside of themed lists, there is no other reason to take him from a purely competitive perspective in my eyes. You can make a case for the Terminator Captain being a very good value stock standard or with minimal upgrades, but again, why take him over the superior Chapter Master?

The only other reason to consider a Captain for me is if he is a Special Character that has some abilities that justify his inferior stat line such as Vulkan or Khan (whom you should extremely strongly consider if you are taking a bike captain as Khan’s special abilities are amazing).

If for whatever reason you do wish to run the Captain instead of the Chapter Master and not for the reasons stated above, then follow the same guidelines for equipping him and chosing Chapter Tactics as with the Chapter Master to make him powerful in melee.

In the end, I do not at all think the Captain is bad and he can be outstanding in the right circumstances, he just isn’t as good as the Chapter Master and therefore, in a tournament, will be the inferior choice. He offers some fun options, and you can run him as a cheap, non-primary assault unit, but he is largely outclassed by the competing HQ choices.