And now, the Meta! 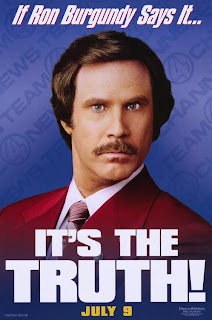 Hey everyone, Reecius here from Frontline Gaming after recovering from Duel Con to talk about the results and the current meta of 40K.

Yoooo, so, besides being tired from that crazy long drive coming back to Northern California from Mesa, Arizona, we’re getting back into the swing of things over here at Frontline. Duel Con was a lot of fun as usual, a very laid back, fun event in a nice hotel (Hilton, in Mesa).

Duel Con was not just a fun GT though, it was a good litmus test of a few things I was very curious to see in a GT as an observer.

We had 32 GT players and 30 Narrative event players at the event. Not a giant sample size, but still some nice data to look at. So, first, here are the results:
In regards to the first point, I think it was a big success. As we’ve been seeing in our test games in the shop, the game absolutely should be played with several, large LoS blocking pieces of terrain. It makes the game so, so much more interesting, tactical and fair. Here are a few pics of tables. 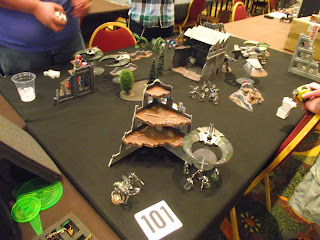 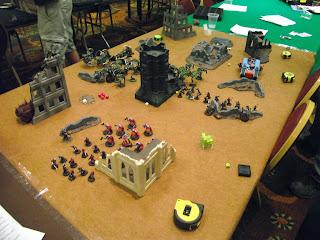 So as you can see, good coverage. Not as much as some of the tables casual gamers play on, (and which will pipe up in the comments section, no doubt) but please bear in mind, there is a world of difference between making 1 or 2 cool, terrain filled tables for your garage and 100+ for a large tournament. It’s a constant struggle we face as TO’s to stay on budget, keep tables covered with enough terrain to make the game as fun as possible, and to find the time to build and paint it all, plus storage. Yikes, terrain is a big task.
However, at Duel Con, we had a Taudar player come up to the front desk and complain that he couldn’t see the whole table….success! Haha, that was sweet music to my ears! Yes my good man, you SHOULDN’T be able to see the entire table.
That helps a lot and, Daemons went 1 and 2, and Nids 3, and assault Necrons in 5th. Now, of course that is not JUST because of the LoS blocking terrain of course (that would be an insult to the skill of the top finishers, all of whom were very good players), but it helps a lot. It means maneuver matters a lot more, deployment, etc. Basically you aren’t playing a game in a shooting gallery.
That leads me to my next point. Taudar, or any shooting army, don’t dominate when they can’t see the whole dang board….obviously. It was the same in 5th with Missile Wolves and IG. Cut fire lanes, give places to hide and all of a sudden, the game is infinitely more enjoyable and allows for a more diverse field to thrive.
It’s not simply a case of who builds the most efficient shooting list and gets first turn. Tau I think were hit harder in general terms as the common Tau builds aren’t as mobile with Fire Warriors and Broadisdes. However, Riptides were able to hide and JSJ behind the giant pieces of terrain which was a benefit. Assault units had an easier time getting to grips with them though, which made it a wash, IMO. Eldar couldn’t shoot across the entire table with Serpent Shields but their general mobility made it not so hard on them and they still did quite well. Again though, it was easier for assault units to close the distance and assault is where you drop Wave Serpents. 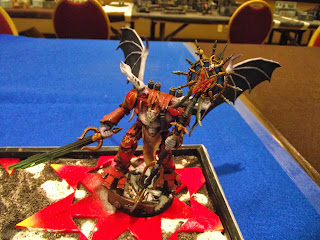 The other thing that was illustrated is something we’ve been saying for a long time: Daemons > Tau. We’ve seen it in the shop repeatedly in our test games and Duel Con’s results bore that out. A good Daemon list should beat a good Tau list the majority of the time so long as they can survive the alpha strike in the case they go second. As they carry their cover with them and it cannot be taken away, plus they are effectively fearless, fast, and very powerful in assault, they have all the tools they need to smash the Tau. Now, I refer here to what I think is the better Daemon list: infantry based, not FMC which I think Tau can beat much easier and which is in general, more luck dependent although can be extremely powerful.
First and Second place were both Screamerstar based Daemon lists with Fateweaver (who is by a mile, the best HQ in that book). I think the Screamerstar shouldn’t be in the game, personally (as I told the winners in friendly conversation after the event), but I never fault someone for taking what is in their book. A unit with a 2+ invulnerable rerollable save is not fun, pure and simple. GW, shame on you for allowing it, it is very poor game design and a simple FAQ could fix it. That said, these types of units are not invincible as some people feel. I will write some tactics articles on how you take them apart using on the table tactics with pretty much any army.
The winner, Gareth, pointed out that in a meta of Riptides being joined by ICs that ignore cover, almost can’t miss, reroll everything, etc. and similar layered combos that produce really bizarre and/or hyper powerful effects, can you blame the Daemon player? No, you can’t, honestly. And again GW, a simple FAQ can fix that, it is silly and sloppy that these things exist in your game. 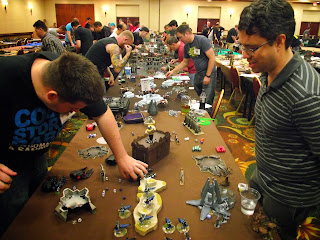 We had a nice spread of armies too, and coming down to the final 8 we had Daemons x 2, Trukk Orks, Scarab Farm Necrons, Taudar, Nids, Mech Deldar, and Grey Knights/Tau. I always root for the under-dogs by my nature, and I was hoping to see a Nids or Deldar on Ork finals! However, the computer paired the Nids and Orks with their worst match-ups (Deldar and GK/Tau respectively), and they were both eliminated in close games. Ryan’s Nids had the tools to stop either Daemon list, he just didn’t get the pairing. Daemons do not like to tango with Nids, that is a very poor match-up for them.
Going into the Semis, seeing Deldar paired with a Sreamerstar, going first made me think Ben could take that Daemon list down, but he got seized on! Doh! He then got a tad flustered, and where he should have scattered to the winds, hunting Daemon troops, ignoring the Screamerstar and playing to objectives, he tried to fight the Daemons head on and fell short. If you attack the fully buffed Screamerstar, you are playing the Daemons game. Don’t waste your time on them when they’re at full power (although, remeber, the bearer of the Grimoire isn’t affected by it, good tip for fighting them). The GK/Tau player had double Dreadknights who with Dark Excommunication, had everything they needed to take Gareth’s Daemons down, but also made some tactical errors and Gareth’s greater experience allowed him to earn victory.
That lead us to the finals: Screamerstar on Screamerstar! It looked like a route when Gareth got Misfortune on several models and used it to beat Johnathon’s Screamerstar down to a single model in a brutal combat but then Johnathon tossed those bones and up came snake eyes! Haha, crazy luck, and it allowed nearly the entire unit to come back! That made it a game and the two battled it out leaving Gareth the winner, 2-1 in a very close game. Well played. 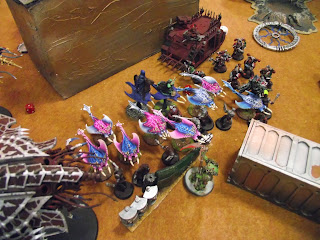 That leaves the new, old boys on the block: Space Marines. How’d they do? Well, about the same as they usually do: middle of the pack. Not that that says anything definitively about them at all especially so close to the book’s release, just that so far they haven’t hit the tournament meta with a sledge-hammer like some of the other books. They are certainly a finesse army, not a power army which amuses me. They went from the go-to beginner army to one that takes a lot of skill to play well. Even the internet favorite White Scars are not an easy army as all bikers is low model count and looses steam rapidly with each casualty. My prediction is that Marines will be an expert’s army for the most part, and not as popular as Taudar by any means. However, as dedicated Marine players ramp up on experience and learn the feel of the army, they will prove to be formidable opponents.
So, another GT on the books! A great event, everyone had very positive feedback and our BAO tournament format continues to be met with praise which is always nice because we put a lot of effort into making it as good as we can. The only strong critique was about time, a lot of folks felt they needed more of it which is common in 6th. We may need to extend rounds by 15 minutes just to account for all of the pre-game stuff such as powers, warlord traits, etc. We’re even strongly considering introducing Chess Clocks in some fashion, maybe just for top tables, but that is an article for another day =)