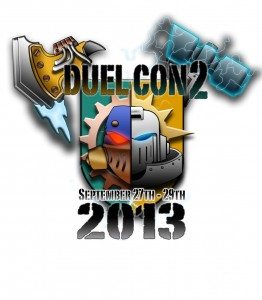 We’re well underway with Duel Con, here’s some updates of the action! This will be updated as we gather more data.

Duel Con has been a lot of fun so far and the 40K events have gone smoothly.

18 Dreadnoughts enter, 1 Dreadnought leave! It was a super fun event, 18 players each brought a Dreadnought of their choice to battle it out in a team event, 9 on 9! The team Frankie and I were on had 4 Contemeptors, 2 Venerable Riflemen and a Ven Las/Missile Dread, a Furioso and an Ironclad against 4 Bjorns(!!), A Furioso, and 4 Venerables!

Our team jumped out to an early lead with some clever movement and targeting of key enemy models, but in an act of terrible betrayal, Frankie and Josh from our team, controlling the venerable Riflemen, shoot Stave Stiff and I in the back!

The Emperor protects, however, and we survived, turned around and blew them both away. Traitors die in shame!

Despite the treachery, our team still won decisevly and after tearing the other team to bits the survivors of our team fought it out until only 1 Dread remained, and it was Tanker and his Crimson Fists Contemptor dread with a Power Fist and Twin Las. Well done and that was a super fun event, definitely something to try in your own clubs!

Friday was the Team Event, won by “Grinders, Turkeys and Spawn, oh My!” A CSM and Daemon combo. Congratz to them!

Third was “Rage Quit, Table Flip,” a CSM team that got third because of the bonus points they earned with the super cool costumes and themes, including their Chaotic Resumes which they handed out to all of their opponents. Nice!

The top team was Victor, Mathew and Luis, “Team One!” They were playing Legion, Trollbloods and Skorne!

In the 20pt Mangled Metal event, it was:

The 40K event is into round 5 of 5, and we have a Daemon on Daemon final! We have a solid mix of armies and as usual, not much Forgeworld to speak of apart from the occasional cool model such as a Tomb Stalker and a handful of Contemptor Mortis Dreads (even with their recent nerf).

We’re way too early in to see who will come out on top, but so far we have a good spread. I will continue to update this with info as we go through the rounds. 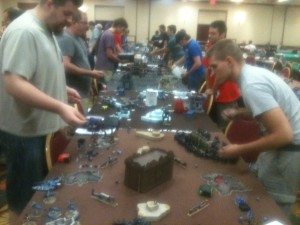 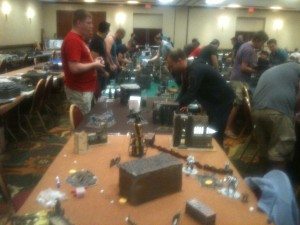 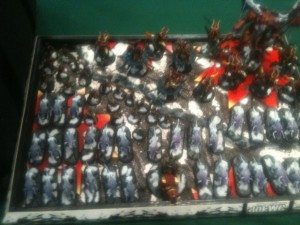 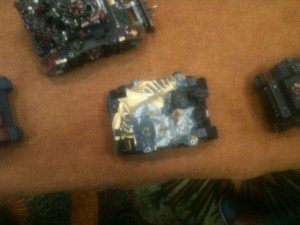 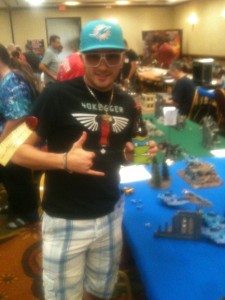 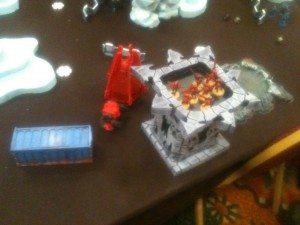 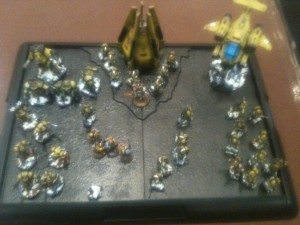 Only one undefeated tau player? Are people bringing out their anti-riptide tech?

No, just not that many Tau players here, hahaha

How many total players in the 40k tournament?

32 for the tournament and another 30 for casual/non-competitive events.

Derp a derp found it.

Being a chaos player, i would be very interested to know the CSM/Deamon winning list…Always interested in learning new possibilities.

I was one of the two members of GTSOM. Our list was;

We decided for a more threat overload approach, and it worked pretty well. More importantly, all 3 games were super fun, and it was a great warm up to the GT.

Tks for the reply, very nice of you…go Chaos 🙂

We will collect the top 4 lists to repost for sure.

Nice to see the dark kin being represented well!

Yeah, they’re looking good! Got a tough draw against Screamerstar Daemons to start the final 4.

Generally excellent, lots of it and adequate LoS blocking. We had a Taudar player complaining that he couldn’t see the entire table so I feel that we did our job!

Yes! The beast has a weakness

Having 1-2 LOS blocking terrain makes for a better game generally.

Agreed 100% It changed the game for the better.

Curious what the GK list is running for troops.

Author
Reecius
Reply to  Nor

No, all on foot. He didn’t have any vehicles in his list. It was a weird one, with a Psyoculum and such, really different.

He had a big unit of sniper Kroot for the allied contingent.

I would absolutely love to see that Nid list! Thanks for the info Frontline gaming, appreciate all your posts!

His army was fast and had great board control and firepower.

Thanks! Were the Dakka Fexs in pods? That would be pretty fun.

Actually, I’d love to see it also. Post it up!

Have to say, I’m pretty disappointed that the final game at top table ended on turn four…..

To their credit, they were in combat starting turn 1.

Right right right. And lots of psychic powers too. However, something tells me that if they both were under threat of loss if unable to complete turn 5, they would have found a way to get there.

Oh I am sure, but they came to a pretty conclusive finish. As we said there though, we’re considering Chess clock if only for the finals and top tables.

Anyone know what the sisters player took?

I’d be curious to know what the Dark Eldar player ran. Anyone remember?

I didn’t end up taking my trick to beat the screamer star because I needed to buff my troops. Perhaps I should have. The screamer star stole on me on a KP mission~ rough.

It was a super fun event. Every player i played was a great guy! I didn’t see any WAAC players. Anyone thinking about comicazi should do it!

So an assault based army won – isn’t that like heresy in 6th?

Don’t drink the Kool-Aide, assault is alive and well and Daemons are the hard counter to the current Riptide Tau fad. They are excellent against Eldar Seprent Spam, too.

The winner used a psychic shooting based army. Using lots of flickering fire.

He had 2 units of Khorne Dogs, a Screamerstar, Fateweaver and a bunch of troops. Very powerful list. I hate the Screamerstar as I feel that no unit in the game should be able to get a 2++ reroll save, but that said, it was an expertly written list and Gareth played it very well.

Someone correct me if im wrong but I believe the army that won was the the one in the third picture from the top?

He was running 2 Serpents, Shadow Spectres, 2 Hornets, War Walkers, Rangers and a Farseer, I believe.

Oh! spectres how cool is that, i was thinking of using them as warp spiders, but looks like i don’t have to.

yup, we allow FW units in all of our events =)

Yeah, echoing Hoboanarki, anyone have the Sisters list or (more importantly) a photo? I read the army was beautiful and I want to check it out!

It’s an insanely beautiful army, just not done yet. When finished, it will destroy people in painting competitions. There are a few photos in the photo post.