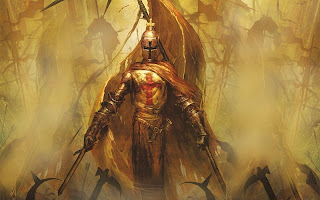 Reecius here again with another review, this time: Grimaldus of the Black Templars! Check out the Tactics Corner for more in-depth articles and video bat reps!

Grimaldus is the stoic, never-say-die High Chaplain of the Black Templars and a tough koot in a fight, surviving the collapse of a building on his noggin and still coming back for more. Let’s take a look at his stats and see if he is as resilient on the table-top as he is in the fluff. 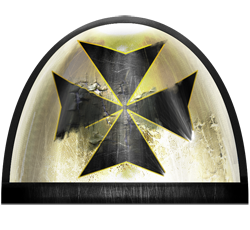 Grimaldus is a nice blend of combat character and force multiplier. Used correctly, he can be very good although like his brother in arms, Helbrecht, he is always going to be held to the standard of the generic Chapter Master he competes with. He is also not cheap at all, weighing at the cost of 2 generic Chaplains + 5 pts. As with all other non-EW, toughness 4 based models, he is susceptible to getting insta-gibbed quite easily in the current meta and his foot speed is also a limiting factor.

What about in Black Templar blobs that consist entirely of bolters? better than the cc variation but still a lot of bodies.

I see him as a more defensive character myself. He will make defensive big bolter crusader squads very hard to push out. And give them and strong counterattack element. He cant really be used as an assault leader IMO. I would rather take chapter master to take the fight to the enemy.

That’s a really good point, actually. I had not considered using him that way.

I think going bolters is a good idea, but big units of them means using Scouts/Initiates in that role, and they are crummy at shooting.