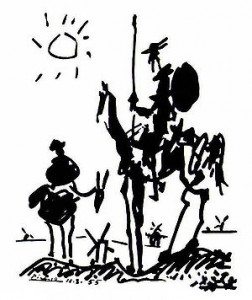 Up for review: old Mr. Fisticuffs himself: Pedro Kantor of the Crimson Fists. As always, check out the tactics corner for more reviews and battle reports.

Pedro Kantor, stoic leader of the famed and doomed Crimson Fists chapter. He has been a part of the fluff going back to essentially the beginning, but is he worth his weight in this edition of the rules? 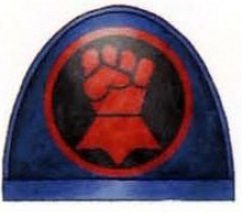 Pedro Kantor is a 50/50 mix of force multiplier and ass-kicker in design but in reality, he is actually worth more to you as a force multiplier. That said, if you position him well and don’t expect him to go into a fist fight (yuck, yuck!) with anything that is strength 8+ and win, you will be playing with realistic expectations. He is also a very good value for what you get, weighing in at 15pts under 2 Thunderfire Cannons and beyond his susceptibility to instant death, his slow speed is his only other downfall.

Pedro largely does what he did previously but now with an improved stat line and a slightly better Orbital Bombardment. He was an incredible value points wise last go around and for only 10pts more than he was, with his bonuses to stats and weapon, he is still a great value. You basically pay 30pts over a Chapter master with power fist but get all of Pedro’s cool abilities which are easily worth well more than 30pts. He is quite the bargain.

Pedro himself is still fairly straight forward to use. He is a decent combat character who can reap quite the tally in enemy models in melee so long as you keep him away from things that can insta-gib him. That is easier said than done as the game is rife with Smashing MCs, but if you can bring his high number of attacks to bear, it will really help you to pulverize your opponent. That many Power Fists swings is scary to anything in the game.

You will want to keep a sacrificial Sarge or similar character in his unit to fall on the sword if you do find yourself in a combat with an enemy model that can ID him in a challenge. Keep Pedro out of harms way so that he can inflict maximum damage with his Fist. A 2+ would have helped a ton, but hey, it is what it is. Despite that, his 4 wounds will keep him in the fight so long as you avoid those instant death weapons.

Obviously, running him with a unit that will make good use of his +1 attack bubble is also a wise move. Hammernators will really benefit form this as do Sternguard, who now go up to 4 attacks on the charge. Also, thanks to Face Puncher for the reminder, Honor Guard with Pedro is brutal. Sternguard also, obviously, benefit from his special rule making them scoring units. He meshes well with them with his super Storm Bolter, too, and that unit can be counted on to inflict a lot of damage while also proving to be pretty unappealing as a target to be assaulted due to Kantor’s presence in it while also able to deliver a healthy punch if they need to go on the offensive.

He also really assists lackluster units like Assault Marines who all of a sudden go to Veteran status when in his radius. Due to their speed, they can be relied upon to get into that radius consistently without having to telegraph your intentions to your opponent by running them in a tight formation which also leaves you vulnerable to blasts and templates. Bikes also benefit in the same way.

However, as I have mentioned over and over, do not make an assault Space Marine army if you want to consistently win in a competitive setting unless it is comprised of 30 Hammernators. I am not saying you can’t win with assault oriented Space Marines at all, just that there are too many Xenos armies with assault units that will swing before you, ignore your armor and cost less points. Marine assault units, in general terms, are best used in a support role these days and Pedro really buffs them up to do that. My point being that I would advise not to build an entire list around this ability of Kantor’s (although I would love to be proven wrong on that point!). Look at it more as a really good bonus to an already really useful character. Run your army the way you would assuming he didn’t have it and be thankful for the nice little boost!

Sternguard as scoring units is awesome, too! I love Sternguard. They are such an amazingly versatile unit. They shoot brilliantly, they assault well, they are reliable. Just an all around A+ unit, IMO. With their points reduction they got even better! I never used Combi Weapons with mine as their magic bullets have always been their best asset to me, so the increase in those weapons’ cost was not an impact on my tactics. In the meta we find ourselves in now of T8, EW, super Kaiju monsters all over the place, a poison 2+, rapid fire weapon is just what the Emperor ordered! That is the equalizer, right there my friends and I have sent many a Daemon Prince back to the Warp, or TMC back to the Hive Mind with my Sternguard. They also put a number on any toughness based models. I could go on, but we will go over them in detail in due time. For now, suffice it to say they are an absolutely fantastic unit and making them scoring is just the cat’s meow.

That said, the only downside to this oh-so-obvious combo is that the Imperial Fists Chapter Tactics don’t jive at all with Sternguard. Bolter Drill doesn’t work on their special ammo. Boo! I can see why to an extent as they are already so deadly, but it is a bummer as you want to max out Bolters to maximize the effect of Bolter Drill, and you wan’t to take Sternguard to take advantage of Pedro’s special rule, but the two rules are at odds with one another and those are points that directly conflict when spent. That is a bit of a bummer, but I suppose it comes down to perspective: you may have lost Bolter Drill on the Sternguard’s special ammo, but you gain scoring unit status. What it does is take the obvious list strategy when using Kantor–30 Sternguard–and make it a little less easy of a choice. Now it is a resource management question: how do you allocate your points while maximizing your free Chapter Tactics bonuses? I personally would probably go with 1-2 units of Sternguard.

As for a list with Pedro, you have a lot of options. As is typical with Imperial Fists (or any Marine army), using those CTs is where you gain increased points efficiency in your list as they are free. Bolters, Devastators and Centurions gain the benefits and as such, taking those units gets you “free points” so to speak as they are better than normal at no additional cost. Beyond that, simply deciding who Kantor is going to go with is going to be your biggest choice. I like Sternguard as stated, but he also meshes well with Centurions as he makes them scarier to assault and it allows him to move and shoot his orbital Bombardment (due to Slow and Purposeful) which he would not otherwise be able to do. As stated in previous tactics articles, a character like Pedro really benefits from flexibility. He is slow, and vulnerable to ID, so leave a spot in a Drop Pod and/or Land Raider/outflanking units, etc. for him so that you can best adapt to changing conditions, game to game. This allows you to put him where you need him most which is the key to utilizing any of your assets to best effect. As I always say, Swarmlord may be the last word in single combat but it doesn’t amount for shite if he never gets there!

Oh, and as an aside, if you are playing Crimson Fists and you find yourself across the table from an Ork player, be a gentleman and apologize before you blast him off of the table. Goodness gracious, that is so crazy to have preferred enemy for your entire army against an army like orks that is already poor on defense. It is not an un-winnable battle for the Greenskins, just that your army increased in offensive efficacy against them across the board by roughly 33% for no reason at all. Brutal. Like, not fun for either player, brutal.