Capt’n Dees shoots us a report as the Escalation League rolls on and the armies get bigger and more powerful! 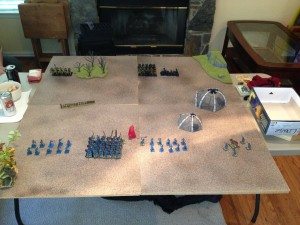 Dan turn one, shuffled up a bit,

Jason turn one, shuffle up a bit, cast Wildform on Cohorts 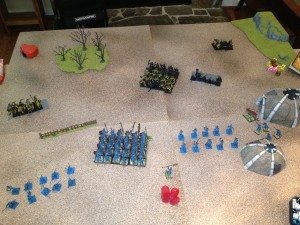 Jason turn two casts Wildrom on Cohorts.  Declares charges for all three units.  Skinks flee Calv, the Saurus hold but he fails charge.  The skinks I think failed charge (or they shot the Salamander and did nothing, don’t remember now). 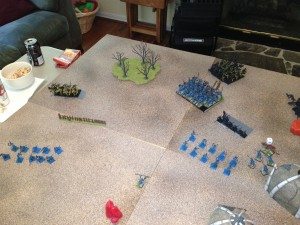 Dan turn three Saurus charge Saurus and make combat.  Skinks on left rally.  Salamander over shoots, skirmishers kill one cohort.  In combat our Generals in a challenge each do a wound.  He kills one Saurus and I kill 5.  He takes a LD and breaks, I fail to catch him.

Jason’s turn 3 his Calv declare assault on Skinks and they flee again.  Saurus rally.  Wildform on Sauri and it goes IF, priest takes a wound, he had stepped out of Cohort squad. 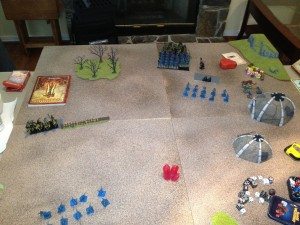 Dan turn 4 Skinks on left Rally.  Charge Saurus on Saurus, cast Wildform on Sauri and IF to kill my priest.  Shooting kills 3 Cohorts.  In combat I overkill his general a few wounds and I think we each kill one Sauri.  If fails LD again and runs off the board.

At that point we call it win for Lizards, in this case Dan’s Lizards!

After talking about the game a bit we think having the Calvary chasing the skink skirmishers was obviously not worth it as they could have been getting in position to flank Dan’s Saurus and help with combat.  I think Jason is now on board with the Great Weapon for the Saurus hero.  I’m not sure the Power Stone is worth it with only one spell.

The Salamander is threatening but didn’t really go crazy this game.

Posted on September 23, 2013 by Reecius in Battle Report, Fantasy

I did not approve of this battle report being published!