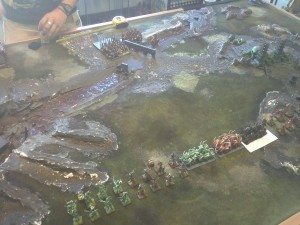 Elf vs. Elf, lined up and ready for battle!

High Elves throw down with Wood Elves in this 750pt battle!

Here is the Wood Elf roster! 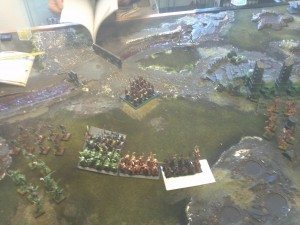 The game was a lot of fun, but Hazel had his Noble on his own and against a shooty Wood Elf army like mine, that is rough as I was able to get a short range volley off on him with two units of Glade Guard and my Noble with Hail of Doom Arrow, which smoked him.

Hazel recovered though and made a long charge with Spearmen. Although they took a lot of fire as they came in, they did a lot of damage and wiped out an Archer unit, but were in turn ground down by a unit of Dryads who came in on the flank.

A separate unit of Dryads flew up field to take out the Boltthrower.

The rest of the Wood Elves had their hands full dealing with the Swordmasters. Those guys are tough! With Great Weapons, WS 6 and Always Strikes First, they were mulching me! The only thing that saved my butt was my Ward Saves on my Dryads, my Nobles Leadership and a super lucky Insane Heroism roll on a unit of Archers that held the Swordmasters up a turn longer than they had any right to, allowing me to get a flank and rear charge with my remaining Dryads, mulching them Swordmasters to the man and earning the Wood Elves the wipe out victory!

Hazel said he’d never leave his Noble out on his own again, which is a smart play.

Great game and the Woodies march on to another victory! Oh they are good but I have a feeling when magic becomes more prevalent I will be up the creek without a paddle!

Posted on September 18, 2013 by Reecius in Battle Report, Fantasy

Ah swordmasters HOE, get your butts out of that tower and go do some beheading for me my precious, when it comes to fantasy I was gaming at End Game with those lovely sods of rules lawyers have our lists down to the probability of doing this with this series spell by turn 4 or I lose group of best darn Fantasy players around, well I went through the ringer of my very extensive have plenty of everything High elves, and at 2500 points for some reason I would just know that my luck with magic, and leadership based tests / break tests will never go my way so the only way to even get a foot up is to bring none other than my little friends the most awesome troops point for point in the game, and for the love of god do not stop even one short of however many you have (ahem 70) and deploy them on maximum fronts, 7 wide with only one supporting rank and WOW, WOW, these little buggers are like the elves verses goblins in lord of the rings, they hit a combat like a T5 tornado and make a puddle of ketchup out of even ogre death star’s, I couldnt resist them, generally would still manage to lose the game consistently because of my refusal to invest heavily in the magic phase, somehow magically failing every crucial -1 break test, even if I had the general and bsb within the 12 bubble (11 or 12 all day at least my ld checks in 40k seem to remain reliably average my eldar might as well all have atsknf) and playing with things like a 600 point dragon lord because its cool, and terrible hahaha, but seriously crushing if combined as the dragon smashes up a flank with some fast cav and a chariot, but seriously the dice gods just seem to hate me when it comes to fantasy to the point that I just laugh while pulling mass hand fulls of my toys from the playing surface.

Fantasy is a blast, I am actually really enjoying it a lot. And yeah, Frankie and I have been watching our ld9 Dwarves and Elves running away like crazy, it sucks!

Just making sure you guys know. The Swordmasters do have ASF but their Great Weapons give them Always Strikes Last. The two rules cancel each other out, thus the Swordmasters strike at their Init 5, and do not get rerolls to hit.

Ah thank you, we didn’t know that, actually.

Apparently under the new book this is probably true, In the last ed book the made it FAQed that speed of asuran meant that regardless of weapon being wielded they still ASF, but apparently that went away in the new army book fresh high elves release, that is a downer too because that is what really gave those combat units the punch they needed to justify their points. Perhaps this is why they are only marine-2 pts not marine cost anymore, oh well maybe they will FAQ it the same all over again, because this was a big one when they came out with the last book and introduced ASF to 90% of the army