So, the final showdown!

I was really happy to have made the finals with my Swiss Army Knife army, especially having faced some seriously skilled opponents with some nasty lists. Now I found myself facing off against another very good player with a powerful army: Taudar.

I don’t think anyone will argue that that is the most powerful combo in the game, right now. I knew this would be quite a challenge.

His list from memory (it’s been a while, so I may get some of it wrong).

So this is a list that is all about synergy. Tau and Eldar can combine in so many crazy ways to combo USRs that it is bananas. They have speed, scoring power, AA, counter reserve abilities, pretty much everything. Wave Serpents are brutal, D.Scythe Wraithguard can erase anything, psychic buffs, and the list goes on.

Once again, an uphill battle. Once again, I knew the only hope I had was for an all out attack and I needed the wind at my back.

The critical dice roll here was for first turn. I NEEDED to go first to cover precious real estate between Adam and I, and to put pressure on him, jamming him up in his backfield and preventing him from bringing his overwhelming firepower and speed to bear on me. Adam and I have played in several tournaments and it’s always been close, but so far, he had never beaten me. I was hoping I would keep my streak alive!

I won first turn and I decided to gamble it all in an all out, headlong assault. I took a big risk and put my Librarian and Rune Priest with my Grey Hunters hiding in a building directly across from Adam, opting not to arrive in the Drop Pod. I needed all of my tools on the table and in his face ASAP. I infiltrated my Scouts with the teleport homer right in front of Adam’s army, scouting as close as I could get. The hammer time bros all piled into the LRC, ready to go hellbent for leather up-field. Adam deployed most of his army in the building across from me, largely out of LoS, and his Night Spinner on a far flank. I reserved a unit of Scouts and my 5 man Grey Hunters for late game objective grabs. The Long Fangs parked in the building across from Adam’s castle. Having seen where he put his Aegis I was confident where he was going to deploy.

My butt clenched tight enough to turn coal into diamond when he rolled to seize the initiative and thankfully, he didn’t as that would have been curtains for me!

I then let lose with my plan. I dropped the Ironclad and the Sternguard with Lysander came in hot. The LRC with Termies moved full speed forwards. The Grey Hunters and psykers then Gated forward off of the Scout’s teleport homer (again, I have always played that these two work together) so that all of my assets were bearing down on Adam. The Grey Hunters’ pod was coming in empty later in the game, I was going all out! Even the Scouts ran towards his castle to prevent one more threat! 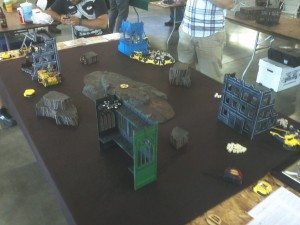 The turn went really well for me! The Dread came down and destroyed the Wave Serpent holding the Wraithguard. I needed that! The Long Fangs dropped the second Serpent down to a single hull point with a lucky shot and most importantly, after my Libby had Gated the Grey Hunters and Rune Priest forward, the Rune Priest Jaws’d the Suit Commander and a Broadside! Boom! The Sternguard with Bolter Drill from Lysander then finished them off. Brutal first turn: First Blood, and dramatically reduced my opponent’s mobility and put him on the defensive. Nice!

Adam was pretty demoralized after that but came back at me. He had to pull back to try and get away from my oncoming forces. He managed to immobilize the Ironclad and kill a few troops here and there, but nothing that really reduced my punch significantly. The Rune Priest continued to earn his pay by shutting down some critical Eldar powers.

I pressed the attack and came at him with everything. My Scouts assaulted his remaining Wave Serpent and blew it up: my best men! The Sternguard smoked most of the Wraithguard and the Grey Hunters continued to press. One small failure that turned out to be really big in the game was that my Termies failed a short charge coming out of the LRC against the Dark Reapers and Farseer. That was bad although it didn’t seem so bad at the time. However, it allowed Adam to fall back into the very back corner and assault my Ironclad. It seemed like a weird thing to do, but I needed to get Warlord as I knew he would easily get Linebreaker to even out my lead from First Blood. So, I had to chase him into the corner to kill them all off which would end up eating a lot of time and become REALLY important late game.

His Warp Spiders deep struck in and nuked most of the Grey Hunters but were in turn smashed. My Scouts had also gotten mulched in the melee, they were fine lads and we remember them fondly!

Beyond that it was just me killing his remaining backfield units while taking slight casualties. Lysander and Co. killed the Riptide and then turned to start heading back up the field. However, another very small, but critical thing happened here. Adam had kept lobbing large blasts at me from the Night Spinner all game doing incidental damage. On a lucky scatter, he had gotten the center of the blast over my Librarian who had already lost a wound earlier in the game due to Perils. Adam rolled a 6 (rending) and I failed my LoS! roll, killing the Libby. It seemed like a small thing considering I had already clobbered most of his army, but I knew that that was bad, bad, bad. My plan had been to use Gate in the next turn to start hopping the Sternguard with Lysander and the Rune Priest back to center board to contest the central objective and contribute to the right flank where the fight had shifted. Without Gate, my most powerful unit was stuck in the far corner of the board, unable to cover the distance between Adam and I in a reasonable amount of time. I had taken too long killing his castle due to a few key, failed charges.

So, now, despite having destroyed most of Adam’s army, I was in a precarious position.

As it stood, he had 2 units of Jetbikes left and a Night Spinner. My 5 man Grey Hunter unit and second Scout squad had minced his Kroot on the right flank, holding that objective. That was the ONLY objective I held, though!

The game was winding down and Adam had only 8 models left on the table but was about to pull a classic Eldar move on me!

As we came into turn 5, my last scoring Grey Hunter was in my LRC (I totally forgot you couldn’t put an ally in your primary detachment transport this tournament and none of my opponents remembered either! Thankfully I only did it twice) and I drove onto the central objective but…I forgot to get out! Doh!!!! What a rookie mistake. However, as I had unintentionally cheated by putting him in there in the first place, I am actually thankful I didn’t get him out as it would have been super lame to have won that way.

At any rate, Adam turbo boosted his Jetbikes onto the central objective to score it (my LRC couldn’t contest) and onto my held objective to contest it. He rolled to see if the game would end and up came that 1. Game over turn 5, he has 1 objective, I have none. I have 3 bonus points, he has 1, Adam wins by 1 point! Gah!!!!!! Hahaha, had the game gone one more turn I in all likelihood would have tabled him but it didn’t. I have to tip my hat to Adam for hanging in their despite getting smashed and lady luck smiled on him when it mattered most!

But as I said, as I unintentionally cheated by having my Grey Hunter ride in the LRC in two games (same guy both times, little git!) I am glad I didn’t win as it would have been a hollow victory. The funny thing is that I used different painted models specifically to avoid getting them confused! I have all of the models I needed painted in my Native American scheme, I brought Imperial Fists because I was using Lysander and wanted to make them distinct. No one noticed either, not me, or my opponents. Oh well, the game is extremely complex and mistakes are made. It’s just a part of the game.

Despite losing in the finals in spectacularly crazy fashion, it was a great tournament, I had a lot of fun. 6 games against very good opponents, while I played a super fun list that showed the old SM book still had some tricks up its sleeve! I can’t wait to give the new book a run through the paces but I will definitely miss not having Null Zone, that was a game winning power.

Posted on September 6, 2013 by Reecius in 40K, Tournament report