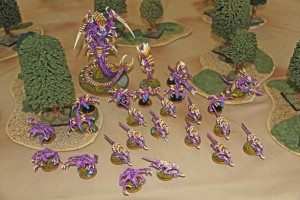 So, let me tell you about my boy the Broodlord. He is a champion!

Genestealers in general took a hit this edition with the loss of charging from reserves or Infiltrate top of turn 1, overwatch, no grenades (still) etc. They are just too fragile to really get the job done which stinks as they are such an iconic unit…and because I have 40 of them painted! haha

However, due to some of the changes to 6th ed rules, the Broodlord has become an absolute BAMF.

So, for those of you who don’t know (you didn’t see him much last edition) the Broodlord is the big dog Genestealer. He comes on a 40mm base and has strength and toughness 5, WS and I 7 and 3 attacks, base, plus 3 wounds and a 4+ with rending attacks. He’s better than most ICs just base and at a lower points cost to boot.

Why he is such a chiefton though, is because he also has some excellent abilities. Hypnotic gaze is awesome, a model in BtB with him and he both role a D6 and add their LD. If the Broodlord rolls equal or higher, his opponent does nothing for that assault phase! His other power creates a 12″ bubble that lowers enemy ld by 1 and stacks with itself. That is obviously great for psychic checks, ld checks, etc. Best of all, both powers target the Broodlord and as such, do not trigger a DtW roll.

Further, you can buff him up with some great options. ScyTals (reroll 1’s to hit), poison, furious assault, and, best of all, Instant Death attacks on a 6, which also rend.

What this all adds up to is a bad ass in a challenge and a debuffer. The Broodlord goes in, issues a challenge, if the enemy accepts, he takes a LD check with good odds of failure (particularly if the enemy has LD9 or lower) and just stands there attacking as the Broodlord’s punching bag, if not, the Broodlord will still almost always swing first, and with 4 attacks, rerolling 1’s to hit and often, rerolling to wound rolls, your odds of rolling that 6 are really good. That means frequently, the Broodlord is going to 86 anyone who doesn’t have EW in a challenge, quick-style. If not, he’s still toughness 5, 3 wounds. He’s probably not going anywhere. If the other player doesn’t accept the challenge, take them out of combat and he slices and dices infantry.

In all, he is a really great addition to a Nid army and a reason to take some Genestealers again. You can min max them, taking multiple Broodlords, or you can take a solid unit of 10 with the Broodlord for a really powerful assault unit. Don’t forget the -1ld bubble, either, it is super useful. While it doesn’t work in your shooting phase, it does work in the enemy phase which is great for the Doom popping his power in their phase and for throwing a monkey wrench into enemy psychers’ plans (and don’t forget it makes Shadows even better!).

Note, readers have been telling us about the Sealer star, which is new to me, in which you take a unit of 20 Stealers juiced up on upgrades, and support them with more ICs (Tyranid Primes) and Psychic buffs to create a very powerful shock unit.  -ed

In all, the Broodlord is a boss!

I like to take two squad of 5 GS with two broodlords, makes everyone days sad with two of them running around! GS are just there for “look out sir” nowadays.

Yeah, and to soak wounds before big boss man can get in there and kill everything in combat.

My buddies broodlords always seem to survive. On another topic what do you think of guard psyker battle squads. With 36 inch range you out range a lot of stuff. I would think dropping the ld of say tau broadsides and the like would be devastating.

Funny you mention that because I have been thinking about a PBS with 2 Primaris in a chimera, using the lower ld power followed up with 2 Psychic Shrieks. That would wipe out almost any unit in the game in one volley (assuming all the powers went off).

If you dont use his base powers, does Biomancy give him some good options?

The stealer star, a large unit of steelers supported by zoeys has been popular in my area… telekine dome, stacked with catalyst and biomancy on the BL has made that unit eat through many an enemy army.

Nice, I haven’t tried that, myself. And yes Biomancy does have some GREAT powers for the BL, but he could also pull a withcfire which he can’t even use.

I’ve run a couple of min broodlord squads recently and if you have a few you have a good chance of iron arm on one.

What that does give you is a great quarterback for infiltrating near the relic and picking it up on turn one… with a couple of primes ready to jump into the squad and soak up extra wounds as you retreat, you can easily run away with that mission if you roll with biomancy.

My only issue with that is that if you don’t get it, it sucks. I would rather stick with the book powers as they are fantastic and a certainty.

Sure… but you only need one star quarterback for the relic. If you’ve got a few units with broodlords your chance of getting iron arm, or at least endurance, on one of them is pretty good. Four out of the six biomancy powers are useful, so you’ll be unlucky to get life leech and haemorrhage on all your guys.

I only really take the unit when I don’t give a crap about winning anyway… so maybe I’m already in the mood to gamble on powers.

Hahaha, fair enough. He is a situationally useful model. For the points investment, he isn’t always going to carry his weight.

With an upcoming tournament and limited free time to paint umpteen gargoyles I have been considering running that same type of build. My issues with the choir in the past (albiet a non stealer build) has been the random powers of the zoanthropes — they often times end up with a bunch of crap non-buffs. May try it out still.

That is why I always default to Psychic Shriek as one of the powers on the Zoeys, and then roll for another on Telekenises or Biomancy. That way, you always get at least one good offensive power.

I’ve also won games by using gate of infinity to contest objectives – zoanthropes can be hard to shift with that 3++ save.

Gate is a fantastic power, I have always felt that was one of the best SM powers and the same logic applies to everyone else. That late game mobility is fantastic.

IMO, the stealer star, or whatever people want to call it, just doesn’t work. My friend Kevin (Janthkin) has been trying to get it to work for most of 6th but it just doesn’t work against a good player who knows how to deal with them.

The idea is to use a large stealer unit (i.e. 20 stealers) with toxin sacs. Then buff them up with a lot of psychic powers – Invisibility from Swarmy, Catalyst from a tervigon, Telekine Dome from zoeys, etc. Swarmy also buffs them up with Prefered Enemy and then you’ve got whatever power the Broodlord has.

However, it is an expensive unit (almost 400-pts with the BL) that just doesn’t have the resiliency to match. You are also relying on a lot of factors (i.e. random psychic powers from your psykers) that is beyond your control (other than Catalyst). Certain armies (here’s looking at you, Tau) will just obliterate this unit, not to mention it is quite vulnerable if it has to move through open terrain to get to the enemy.

The stealer star can work under the right conditions. However, it just relies too much on a lot of external factors to make it work. And with the cost of the unit, that’s going to cut in on the number of “external factors” that a bug army is going to have to work with.

Yeah, I lean more towards the smaller units just to escort the BL who does all the work.

I think if you’re taking the swarmlord, better to run him with one guard and a prime to try for a majority toughness iron arm star. Why treat swarmy as a supporting unit and cast powers on something else when he can put the same powers on himself and get forward to hurt things.

It’s cheaper, can be T7-9 pretty reliably… and how many deathstars do you need in one army anyway?

Lack of resilience is the killer for this unit as Jim pointed out. Unfortunately your 20pt Stealers just wilt to fire from bolters and standard flamers. It can kick butt on any unit you get it in combat with, but getting it there is the problem…. and you’d rather have it stay stuck in combat for that extra turn anyway rather than wiping your opponent.

In regards to the Broodlord, I’m ok with running him in some small 5 man squads for backfield harrasment. Infiltrate in or outflank and have him on the board when there are too many other threats and he gets pushed way down on the priority table. I had one instakill a trygon with implant attack in a tournament a few years back (shoulda seen the look on my opponents face).

Here’s hoping for a BS of 1 in the new dex! I’m also looking forward to some of the rumored run and assault options. I have 50 Hormagaunts sitting in foam waiting for the update 🙂

I’m a huge Broody fan myself too! He’s a pretty good bargain even with how fragile the stealers are, you just look at them as ablative wounds for ol’ broody. Biomancy is amazing for him too, granted you get that rare time when you roll Life Leech and Hemo, but *any* other power on that list is beautiful, especially (as someone mentioned earlier) when you throw TK Dome / Catalyst, etc from other sources.

Remember that the broolord and friend can go to ground if outside of synapse, great to distract the ennemy by infitrating. I used 4 min sized group ( I was trying a list without tervigons…) and they where great! They have tools for a lot of situation and you decide at the start of the game what’s is function by rolling your powers, The best thing is he is an HQ troop!

Yeah, we were talking about min/maxing 6 units of them! I think it would be pretty dang effective.

I have been min-maxing the different Tyranid troop weapons recently. The results may surprise you.

You can see the result of my calculations here:
http://wargametactics.com/warhammer-40k/tyranid-tactics/tyranid-troop-tactics.html