Hey everyone, here’s game 4 of the Golden Throne GT Report against Lyzz Foster and her Daemons! 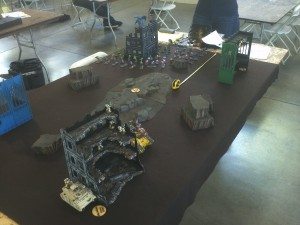 This was going to be a fun and challenging game! Lyzz won the BAO 2013 undefeated with her Daemons. She is an excellent player and I was looking forward to the game as we had never played.

I actually felt really confident going into this game as I had all the tools I needed to win the game. Null Zone, a Rune Priest, the Landraider and Ironclad, Lysander and Sternguard are purpose built to beat Daemons (noticing a pattern through these games?). Null Zone is pure murder on them and the Runic Staff shutting down key powers is huge. Sternguard don’t care about toughness anything, and Lysander can go toe to toe with any Daemon. The Land Raider is largely immune to any Daemons apart from the FMCs who have to risk landing to attack, after which they are are good as dead. I also got first turn! Sweet, first game I go first of the tournament and it meant that I had really good odds of killing Fatewaver on the first turn with Sternguard while he was on the ground and vulnerable. Hammer and Anvil was a boon to me too, as it put a lot of real estate between the Daemons and my soft scoring units. So, going into it I felt that baring some really crazy luck, I should win.

I deployed as above, with my scoring units and Long Fangs in a defensive position, and my Land Raider out front as Lyzz had almost nothing that could hurt it at range. Lyzz deployed very well, bubble wrapping her vulnerable FMCs. She then proceeded to have the luckiest first turn I have seen in ages!

First, she seizes the initiative. Ouch. OK, not too bad, I can recover from that, her smart deployment had largely mitigated my Alpha Strike anyway. Then, she rolls an 11 on the Warp Storm table, right off the bat! Haha, yikes! That is the most broken rule in 40K right now (LD check on 3d6, if you fail one of your Psykers turns into a Daemon Herald), IMO, but thankfully it couldn’t affect my Psyker as he was in the LRC. Still, it was crazy that that was the first roll. Next, she fires the one weapon in her entire army that can actually hurt the LRC (Witchfire from Fateweaver), rolls a hit, rolls a 6 to pen (only result that pens) and a 6 on the damage table. Boom! Holy $#!*, what the hell just happened here?! Haha, I gave up First Blood and lost one of my critical units to a crazy luck shot after getting seized on. She also dropped the Portal Glyph off which was in a position to start spitting troops onto an objective. Well alrighty, this game was going to be a lot harder than I had thought it was going to be!

My outflanking Scouts came on to run onto Lyzz’s objective. I dropped Lysander and the Sternguard in to take a chunk out of the Daemons and protect the Scouts.  The Ironclad came down and burned then charged the Seekers. I needed that fast moving, hard hitting unit out of the game and the Ironclad was just the man for the job. They couldn’t hurt him so he would keep them tied up most or all of the game. The Sternguard hit the Seekers but didn’t do nearly as much damage as I had hoped as Lyzz was rolling hot on her saves. As my LRC had been destroyed, I wasn’t able to get Null Zone into play this turn. The Libby and Termies started hoofing it across the board. The Long Fangs blasted the Portal Glyph, which was really important as I needed that thing dead.

Lyzz countered by sending Fatey and a DP at my scoring backfield units to make a play for my objective. She used Fateys reroll to keep her deepstriking Daemonettes off of the table. She re-positioned her units and shot at the Sternugard for incidental damage, Lysander tanked most of the wounds. Damage was pretty minimal for the turn, thankfully.

I countered by dropping the Rune Priest and Grey Hunters came down into her lines to get that Runic Staff going to mitigate the Psychic Buffs. They opened up on troops to start whittling away at Lyzz’s ability to take objectives. Mid game, Lyzz was putting pressure on my objective while trying to counter the pressure I was putting on hers! I damn near killed Fatey when a crazy lucky shot from my Razorback grounded him (with the reroll!) but my stupid Termies and Libby failed a 6″ charge. No hammer time! Doh! The Ironclad was killing off Seekers but in doing so, opened up a small gap (he was surrounded previously) allowing the Plaguebearers to charge in barely, and Lyzz rolled red hot and got 3 6’s, killing the old boy. Crap! I needed that not to happen.

However, I kept the pressure up on her troops and between the Sternguard with Lysander, Null Zone (which finally got into position and started doing work) and the Grey Hunters, I was murdering them rapidly. That is what allowed me to kill the Screamers. I had a close call when Lyzz rolled another 11 on the Warp Storm table, but I passed my check. However, the following turn she rolled and 11 again! Gah! My Libby turned into a Herald whom the Termies then splattered. I hate that stupid rule so much!! However, the Termies then sat on the central objective ensuring that no Daemon troop was coming anywhere near it.

The game was winding down to remaining scoring units. I had killed almost all of Lyzz’s infantry but her Daemonettes who came in turn 4 to threaten my objective. Luckily for me, they had scattered way off and had to spend a turn repositioning to threaten the objective. She in turn killed my drop pod Grey Hunters and Rune Priest eventually in combat. My Scouts were locked in combat with her DP (Stubborn saved my bacon multiple times this tournament) and I eventually had to send the Long Fangs in, too, to keep him from going anywhere. Challenges helped me to prolong the combat. In Lyzz’s backfield, she was forced to send her other DP into the Sternguard as they were protecting the scoring Scouts from assault. It was a serious long shot, but Lyzz really didn’t have a choice. He went in, Lysander challenged and the DP performed his face to the end of the Thunder Hammer maneuver and was promptly sent packing back to the warp.

At this point it was going to come down to model positioning. All Lyzz had left was her Daemonettes, Fateweaver, and a DP locked in combat with my stubborn Scouts. I had a unit of Grey Hunters in a Razorback, Lysander and the Sternguard, Termies protecting the middle objective and Scouts on Lyzz’s objective. Lyzz moved onto my objective with Daemonettes, I tank shocked them off and ran the Grey Hunters onto my objective. Lyzz had tried to fly Fatey off of the board to contest her objective (good move, by the way!) but I had spread out the Sternguard and Lysander in such a way that she couldn’t get close enough. At this point I had 2 objectives to Lyzz’s none. We rolled the end of the game dice to see if it would go on a turn and even with Fateweaver rerolling it (which should not be allowed in tournaments, IMO) the game ended and I narrowly won, despite some punishing bad luck early game.

Great game with Lyzz, she was every bit as good of a player as I had expected and she put up a really good fight despite a steep list missmatch. I seriously had all the tools to just smash Daemons and the fact that it was so close says a lot.

Thanks for a very good battle report. I love to see Marines still doing well!

Glad you enjoyed it! Yeah, they still have some tricks up their sleeves.

Good report. I loathe that warp storm chart. Way too much swing based on luck. It’s game changing randomness like that which made me quit fantasy in 8th edition.

Yeah, me too. It is just too powerful. I would have been fine with it if they toned it down a bit, but some of the results are just insane.

Herp a derp and DPTs had wings

That was a great game, Lyzz, you did really well despite facing some of the best Daemon fighting tools in the game.

This report makes me want to eat some crabcakes.

Thanks, Jim! It was a really good game, Lyzz put up quite a fight considering she was facing a really bad match-up.

Its my Bday ready for match 2? im going to use the power of nerd BO to keep you down boy DOWN.