Just got back from vacation! It was nice to get away (mostly) and spend some time with family, friends and my girlfriend. Sorry the blog was a bit slow, I just didn’t have time to keep up with it. But, here is the game 2 report!

So, I will actually be going through these games one at a time, I think people will get more out of it that way.

Here is a link to the article on my list and how it works: part 1

And here is a link to the game 1 report: Game 1

So, after a crazy lucky finish game 1, I was on to game 2 which was Hammer and Anvil with Purge the Alien (Kill Points). I go to my table and who do I see but Tim T. and his triple Land Raider Dark Angels/IG army. Doh! A meta busting triple Raider list with an Azrael blob in a KP mission….this was not going to be easy!

Here is Tim’s list from memory, I may get some of the details wrong.

Not an easy list to get kill points off of at all, and, a lot of my best combos would struggle to earn their keep such as the Sternguard. Land Raiders don’t give a crap about magic bullets!

Before I go any further though, I really want to say that Tim is an absolute pleasure to game with. A good player and plays to win, but very gracious, fair and level headed. I really enjoyed our game.

Tim won first turn and took it. It was night fight so I didn’t mind having second turn at all. He deployed everything on the table apart from the PCS that was in the Vendetta.

I deployed completely out of LoS or range due to Night Fight to deny Tim his first turn Alpha Strike. I reserved one unit of Scouts and my Grey Hunters in a Razorback to try and keep them out of danger as long as possible since they would be contributing little to nothing to the game. Their best use here was to keep their heads down and not give up a KP. I put Lysander in the Drop Pod with the Sternguard in case my Ironclad wasn’t able to lock the blob in combat out of deep strike. The downside to this strategy was that if the Dread did make it into combat and locked the Blob down, the Sternguard would have little to nothing to shoot! The Rune Priest went in the pod with the Grey Hunters to go for the lucky first turn JotWW shot. The Land Raider has the Hmmernators and the Libby. The Long Fangs weren’t going to do much this game but strip the occasional HP from a LRC, which is exactly what they did all game.

Turn 2 was very, very important. If I was to have any hope of winning this game, I HAD to have a good turn here. It was critical as if I fell flat here, I would almost certainly lose.

I dropped my Dread and the Grey Hunters to hopefully get me the alpha strike I needed to keep me in the game. I had faith that I would be able to neutralize the long range AT and sent my LRC up field full speed. Also, with no more Night Fight hanging back wouldn’t help me much.

The wind was at my back and the the Sabers didn’t even scratch the Ironclad! Whew! If he would have popped me that turn I would have been in deep doo doo. Statistically, I knew the odds were in my favor that the Ironclad would make it into combat but still, it always makes the behind clench! The Ironclad then charged into combat (also surviving over watch) with the Azrael Blob and as they had nothing above strength 6, they had been taken out of the fight effectively for the entire game if I chose to just tar pit them. AV13 walkers are awesome. With Azrael’s 4++ on the entire unit though, I didn’t do any damage at all.

My luck continued with the Rune Priest. This time I didn’t fail my psychic check, and Tim didn’t deny the witch. He had all 3 Sabors lined up in such a way that I could touch them all with Jaws. As they don’t have an initiative score, they auto fail and all 3 were killed! Woot! I had taken all but 1 Las cannon off of the table and my LRC was largely free from danger. On the downside, I didn’t actually hit any of the crew with Jaws and as such, had not picked up any KP. The Grey Hunters shot the survivors and with the Flamer killed one, getting me First Blood and a KP but the other two were free and I knew I absolutely MUST destroy them to keep the KP counter from swining out of control. While that turn had gone great for me, I had only picked up a single KP and had presented 5 to my opponent between the Drop Pods, units and characters.

Tim’s turn he blasted a Drop Pod for an easy KP and then let my Grey Hunters have it with LRC’s buffed by the Banner of Devastation. Ouch! I had only 2 and the Rune Priest left after he was done. The Ironclad failed to do anything again due to the 4++

My Turn the Libby popped Null Zoneand charged forward in the LRC again, getting into range of the Blob. I shot the remaining Sabor Crew for the easy KPs and Lysander came down with the Sternguard, massively over-killing the CCS for the KP.

Tim’s turn his Vendetta came in and blasted my Dread Drop Pod, but didn’t kill it. He turned around and blasted the Sternguard and Lysander with that brutal firepower from the LRCs with the Standard, wiping them out and taking 2 wounds off of Lysander. I countered by sending everything I had into the blob to both destroy them for 3 KP and Warlord, and to keep my Infantry safe from the punishing LRC firepower.

Over the next few turns and with the AWESOME power that is Null Zone, I chewed up the blob and killed Azrael with my Libby who Force Axed him! Huzzah! With Azrael gone, the Blob lost fearless and was destroyed. Nice! I was way up on KP now.

However, Tim didn’t roll over. He blasted my Terminators and Lysander into oblivion with massed Banner of Devastation bolter shots (one of the only games Lysander Actually died) but not before the boss man smashed an LRC with his str10 ap1 hammer (Lysander’s hammer is not actually AP1, but AP2 with a special rule granting +1 on the damage table, so effectively the same thing)! The Dread also destroyed an LRC with his Seismic Hammer before biting it and my LRC kept blasting away at his, stripping Hull points here and there. 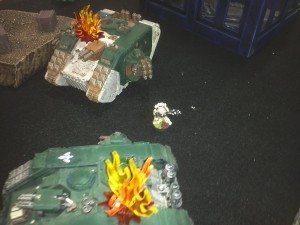 My Last Grey Hunter, who hid in the LRC and then won me the game!

Tim focused on going for easy KPs as my Dread Drop pod, then Libby, then Rune Priest all fell, and my lead started to fade away and we were tied going into the last turn. Tim went for a balls out move, and he had to, deep striking his PCS out of the Vendetta into my deployment zone to go for both Line Breaker and to kill one of my units of Scouts that had been hiding in the backfield all game. The unit came down, lost a guy to dangerous terrain (he scattered out of my deployment zone!) and blasted my Scouts who passed just enough armor saves to not have to take a morale check! Whew! I then had my last Grey Hunter, whom had been hiding in the LRC after the blob combat ended, jump out of the tank and strut into Tim’s deployment zone, getting me Line Breaker and the win by a single point! I like to imagine the doors of the LRC opening with some sweet 80’s hair metal playing, the Grey Hunter moon walking out of it and then pointing to the crowd and doing a spin kick to the splits in the deployment zone, winning it in style! Yes, I have an active imagination! haha Cheater alert! I without thinking got my allied Grey Hunter into the Space Marine LRC which you cannot do! Doh! Neither Tim nor I caught it and it was totally unintentional.

We rolled out the morale check on the Scouts assuming they had failed that last critical armor save and I failed the check and they would have ran off the board!

I literally won the game with the last armor save! Great game, great opponent. 11-10 victory to the Marines and Wolves!

We swapped opponents, I played Tim round 1, and Israel round 2.

Oh, nice one! Both good games.

Yeah, Tim is one of the regulars at the COCs, I’ve played him several times and it’s always a good game. I had fun shrugging off Israel’s silly amount of firepower, Broadsides just bounce off Paladins. He managed to glance my LR to death with four sixes on his seeker missiles, though, won him first blood and took out my lascannons that could ID broadsides, that one role won him the game since everything else was so close.

Ah, that’s crazy! He took 2 HP off of my LRC with Seeker Missiles, too. Lucky shots!

That’s the last time he takes a powerblob without a meltabomb or two! Another great game. Well played, sir.

Sabres are all seperate kill points? It always confuses me how platoons work. Could he have kept them together any way?

ive learned the hard way to have some melta bombs in blob squads.

Yeah, when he deployed I was like, do you have any melta bombs in there? When he said no, I was just smiled!

It’s ok by me. I was much happier facing one LRC than three

Hahaha, yeah, no kidding! I don’t think it mattered though honestly, as I could still have killed his PCS (I didn’t because once I had Linebreaker we called it before I could finish them off) which would still have given me the 1 point lead.

Wait, how was the Grey Hunter inside of the LRC? Correct me if I’m wrong, but I’m pretty sure units can’t embark on Allied Transports under any circumstances.

Yeah, I was about to call this after reading. Otherwise I’d be rolling things like Banshees in Dark Eldar Venoms/Raiders so they can assault out of them…. Still think they should’ve given the Vyper a 5 man capacity like the Venom.

Oh yeah, it is totally illegal, but in the heat of the moment my opponent and I totally missed it.

You dirt bag Reece first you slow played against Israel and now you boarded an allie’s transport. You need to be tar and feathered immediately!

Hahahaha, right?! The secret to winning is cheating apparently!

As much as I wished that Lysander had a S10 AP1 hammer the digital codex lists it as S10 AP2.

The paper codex says S10 and +1 to the roll. Apparently they felt that AP2 already gave +1 so we weren’t worthy of AP1.

Even with that he is a monster at killing armor 🙂

You’re right, it isn’t technically AP1, but effectively it is. AP2 +1 to the damage table is the same as AP1.