You are here: Home › magic the gathering › Ethan’s Magic the Gathering Corner

Ethan’s back with some more MTG analysis!

Hey everyone, it’s Ethan again. We currently find ourselves in the midst of core set spoilers, and there have been a few interesting developments such as slivers and a heavy hint at an enchantment subtheme in Theros. For this article I will eschew both those topics in favor of two particular cards which if you keep up with spoilers should be quite well recognized. To start things off, I will go  over this little guy: 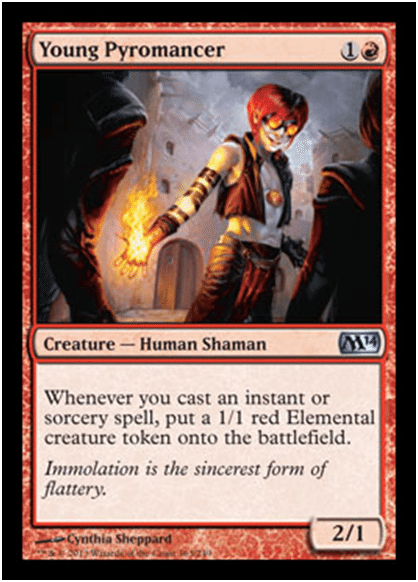 Now at first glance he may not seem like much, a two mana red 2/1, a goblin war piker with the upside of being human in the current standard environment, but his ability is what makes him shine. Every time you cast an instant or sorcery, you get a 1/1. In a creature based deck this doesn’t seem like much but in a tempo shell it can be quite powerful. Flashback Think Twice, make a 1/1. Syncopate your Thragtusk, make a 1/1. The list goes on and on; every spell you cast has added value, and gains you more board presence. His effect is so powerful some have even compared him to Tarmogoyf, Snapcaster Mage, and Dark Confident, all of which see major play in eternal formats. Imagine you resolve this in legacy: Brainstorm, make a 1/1. Daze a Tarmogoyf, make a 1/1. Stifle your fetch land, make a 1/1. And in modern U/W/R decks can still take advantage of Young Pyromancer, but he makes the largest impact Empty the Warrens storm decks consistency by essentially adding half a storm count to each spell. But enough about this guy let’s talk about more exciting the sets flagship planeswalker, 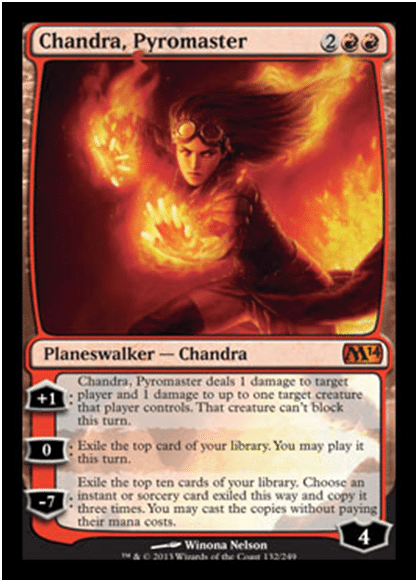 Now, when Chandra was first spoiled people had mixed feelings about her. R&D had mentioned how they had wanted her to make a constructed impact which made people have high expectations so when she was spoiled quite a few people got their panties up in a bunch over her constructed implications or rather in most people’s opinions, her lack thereof. Now her +1 ability is certainly powerful, and seems made for an aggressive red deck. It will deal damage to your opponent and get rid of a blocker, possibly even killing a low toughness creature or finishing of an already damaged creature. It seems good, although as an aggressive 4-drop it can’t quite compete with the likes of Hellrider or Falkenrath Aristocrat, and probably not Exava, Rakdos Blood Witch after they rotate. Her 0 ability is interesting, providing some form of limited card advantage which is rare in red although they have to be used on your turn which pretty much eliminates her as a candidate for a spot in a flash deck, and although aggressive decks could use the reach, they usually want to win around turn 4. Another thing about this ability that is unusual is that if you play Chandra turn four, you don’t want to use it because it basically becomes 0: Exile the top card of your library. Most other Planeswalkers can activate their first or second abilities the turn they drop. And then we come to her ultimate. When I first looked at it I was confused normally for Planeswalkers, when considering whether or not to put it in a deck I ignore the ultimate, because it isn’t realistic to expect to activate it, and if I get there it’s an added bonus. For Chandra one thing about her ultimate that really bothered me was that it required a decent concentration of instants or sorceries to even go off consistently, ultimate activation may be unrealistic, but if I get there I wantit to be more game changing than -7: exile the top ten cards of your library. All this got me thinking, there must be some aggressive deck that has a high concentration of instants and sorceries that wants to play cards on its own turn rather than its opponents. And then it hit me, the deck that wants all those things, the Nivix Cyclops deck. For those of you who are unfamiliar, the Nivix Cyclops deck runs a couple of other threats, Gutter Snipe, and Geist of Saint Traft and uses instants and sorceries like Boros Charm and Artful Dodge to push through enough damage to win. Although I have yet to playtest it extensive with Chandra, an important thing to note is that in most cases you will play Chandra off of the curve, because you almost always want to cast an instant or sorcery every turn. Young Pyromancer adds to the deck another angle of attack by creating tokens and if you add him you should also consider cards that boost the whole team like Teleportal or Weapon Surge. I am sure make a competitive deck with these cards, although I’m not sure if they add more or they take away from the original deck. In addition somewhat confirming my hypothesis about what deck the new Chandra belongs in, a day or two after it was spoiled, Sam Black featured the deck in an article on the Magic website, which I doubt is coincidence.

Posted on July 12, 2013 by Reecius in magic the gathering