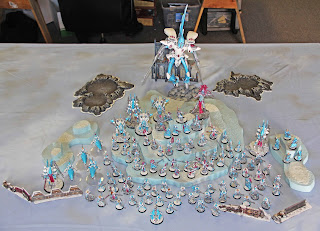 Hey everyone, Reecius here from Frontline Gaming to answer a question I have been getting a LOT lately.

You may have seen some of our video battle reports on our YouTube channel and noticed that a lot of us at Frontline have been running my Eldar with Dark Eldar allies, with a unit of 14 Hellions and the Baron in just about every list.

Or you haven’t noticed that because you don’t watch the videos, but the title piqued your interest.

Either way, I have been getting a lot of emails, calls, texts, etc. asking why we run the unit. So, I figured I would write a article about it as it seems like a topic people are curious about.

It’s hard to discuss a single unit in a vacuum as the context of the list it is in can alter a unit’s utility dramatically. For example, a unit of Dires on foot in a Mech list is very out of place but in a Footdar army functions extremely well. So, why do I run Eldar/Dark Eldar in general? Taudar is the hotness everyone is talking about these days and for good reason, it is a damn good combination. Maybe the most powerful in the game right now. However, I like to keep it Elfy, and I think the Deldar alliance is just a fantastic combination. The compliment one another very, very well.

My Eldar army is my favorite to play, hands down. It has been since I first painted it up way back when. I love the way Eldar units work in concert with one another. Over the years, I have fine tuned it to a very precise tool. A lot of folks think the list looks weak at first glance, but that is just another advantage, IMO. Every unit in it is chosen for a very specific reason and each unit performs a crucial role. Here’s the list I have been having a ton of fun playing:

You will notice I still have 25 points to spare as I swap things around in my list and try out different wargear choices.
So, a hybrid foot/mech list. So far I am 14-1-1 with the list against a wide variety of armies all played by tournament players. I don’t say that to brag at all, I know how stupid it sounds when people try to toot their horns that way, I only state it to show that this is a list that has been run through the paces and is not just pure theory. The one tie was to Triple Heldrake Chaos, which I got lucky and two didn’t come on until turn 4. The loss was to a gun line Tau army that seized on me. I got shellacked fairly thoroughly in that game and only had 4 models left by game’s end! Ouch!
At any rate, no you all can see what is in the list to help illustrate why I take Hellions. Hellions fill in several gaps in my list.
So there you have it. The unit brings a lot to my list and so far has performed extremely well for me. Tau is the only army that ever kills them all (stupid Marker Lights!) but they are still super useful in that match-up as a high threat unit and troop/suit killer.
Lastly, if you worry about losing them to morale, stick the Shard of Anaris on the Jetseer and profit.
Hellions: they’re what’s for dinner!

25 Responses to “Why I take Hellions in my Eldar List”