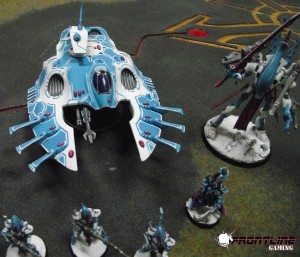 So this is the list I have been playing and having a lot of success with.

So I have been playing this or a close derivation of this list and have been doing really well with it.

So far I have been doing really well with this. I’ve only had one close call, every other game has been a decisive victory (I have played about 10-12 games with Eldar so far). However that said, I have been having really good luck, too which counts for a lot.

The Farseer is a boss. I doubt I will play an Eldar list without him. I like Eldar because of units like this, he buffs key units to really ratchet up their power levels, is fast, resilient and just fun. The Spear is there because I had some extra points and it adds a little extra oomph.

The Baron is one of the best point for point HQs in the game. He gives me +1 to go first, makes the awesome Hellions troops (who combo with the Farseer amazingly well, Prescience, Forwarning, Doom, etc. make this unit SO good), let’s them reroll failed Dangerous Terrain tests, and reroll the Hit and Run roll as well as the distance they go, gives the unit offensive and defensive grenades, stealth and has a Shadow Field. Wow, that is pretty spectacular for such a cheap character. Plus, he hits pretty hard, and is really good for taking down vehicles.

The Hellions themselves are absolutely excellent. They shred infantry and MC’s with massed poison weapons, have combat drugs, Power from Pain, are fast, a scoring unit and fight well in HtH. Prescience was made for these guys, as was Doom. They are really an all around fantastic troop unit and with the Farseer and Baron become a premiere unit, IMO. I have been very happy with them, plus, the models are some of my favorite. The entire unit is super fast and has fleet so they reliably make charges.

The Spirit Seer is new. I have only gotten in a few games with him but so far I am impressed. His buffing/debuffing abilities are just fantastic. They can turn a tough fight into a slaughter. He is also cheap, and attaching him to a unit makes them LD10 (Edit: It was pointed out to me that he is LD9, not 10, doh! Sorry for the confusion-ed), which is nice. He also makes Wraith units troops and at 1850 I am considering moving some units around to add in a Wraith unit.

The Rangers are great for winning the game. They sit tight on an objective with infiltrate, waiting to see where the other guy deploys. They can also outflank if needs be and take a more distant objective. They shoot passingly well, but they are there to keep their heads down and hold a game winning objective. With the amount of Hell Turkeys I face on a regular basis, they can be a liability, but against your average opponent they are a great buy.

I love Dire Avengers. For me, they are just a fantastic troop. If you are going mechanized in the amazing Wave Serpent, Guardians are the better choice in most cases as they hit just as hard at close range for a lower price point. If you are hoofing it though, that extra 6″ range, Ld9 and Counter Attack make Dires the better choice, IMO. So far every single game for me they have been exceptional. Bladestorm + Battle Focus is the Cat’s Meow. Such a fun unit to play.

I can’t see any reason to not take Warp Spiders. They are all stars. Fast, hard hitting, versatile, just an all around amazing unit. Arguably the best in the codex. I doubt I will play without them this edition. They have killed more flyers for me than anything else in my list. Twin Link, jump into rear arc and profit.

War Walkers are another of those units that I can not justify not including. A unit that pumps out 24 BS4 strength 6 shots with an invul save, Battle Focus, Scouts, etc. is just too good not to take. With Doom and Guide I routinely wipe entire units out in a single volley. They are another all star unit.

The Ravager is a new addition. I wanted a unit that had comparable fire power to the War Walkers but at a lower price point to allow me to take a barrage unit, also. The Ravager was the right call. Fast and hard hitting plus cheap, it is a great answer to Termies and such. Again, Guide and or Doom and this unit reliably erases a unit in a single volley. I really like having access to this through allies and feel it adds a lot.

The good old Wraithknight. He is so awesome. I still have not lost him in a game. Frankie managed to drop him down to a single wound in a game tonight with 2 Chaos Lords and a unit of Spawn before I killed them all and that is by far the closest he’s come to going down. His resiliency, speed and much needed anti heavy tank has been just awesome. I have not had a game yet where he has not been a huge factor. I will take one of these every time, no doubt. On top of that, the model is gorgeous. I use him as a giant bully, going after weaker units and picking them off one at a time. By game’s end he typically takes out 2-4 units and he frequently gets me First Blood.

The Night Spinner. I really want to like this tank. It is cheap as chips, fast and versatile. He is good against every target. However, in every test game he has been pretty underwhelming. I feel like a good list in 6th should have a barrage weapon, and the fact that the Night Spinner also is fast and has a good template weapon too means he is extra versatile. Being able to tank shock units off of objectives last turn is great, too. However, after play testing I think the better play is to take a Wave Serpent. The Serpent is just so incredibly good. I can drop a unit of Dires down to Guardians, save 40pts, upgrade the Night Spinner to a Serpent and have 25pts left over to play with. In test games I have found that the Serpent is great for both keeping a scoring unit alive and getting it where it needs to be to win me the game. Plus, the Serpent hits like a freight train! The thing has great offense and is also passable AA. I run mine with a twin Scatter Laser and Shuriken Cannon.

So that’s where I am at so far. I am sure I still have a ton to learn, but so far this list has proven to be really good. It is flexible, fun to play, hard hitting and resilient. I really like it a lot and honestly, I have not had this much fun playing 40K in a long time.

← New Forgeworld Goodies!
Signals From the Frontline: We discuss Anime Expo, GW rumors and news, some new games and models. →