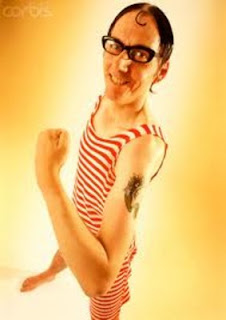 Have we found a way to make these stinkers cheesy?!

Hey everyone, happy to see Faeit 212 back up and kicking! Reecius here from Frontline Gaming to talk about some of the most maligned units in 6th ed 40K and how they can not only be good, but cheese whiz good!? I add the question mark because I almost don’t believe it myself!

So, let me set the stage. I was chatting with a customer of ours whom we just completed a beautiful commissioned Fallen Dark Angels army for, pictures of which you can see here, here and here.

In said commission, is a unit of 8 Warp Talons, pictured below. 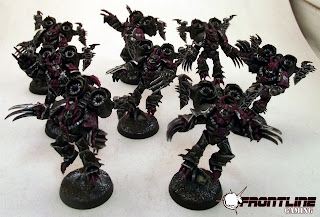 Yes, but typically considered to be sub par performers where it matters. And for this type of performance anxiety they unfortunately have not yet developed a little blue pill.

Warp Talons hi hard but their crippling lack of grenades combined with the need to swing first, high point cost, relative squishiness (a bolter kills them as easily as any marine) and competition with the all mighty Hell Turkey means they rarely see table time.

Our client brought up an interesting point that I had not yet considered and that led to a domino effect of horror in my puny little brain.

Use the Grimoire (which states can be used on any Friendly unit with at least one model with the Daemon rule) on them with either the MoT or MoN and all of a sudden they become REALLY resilient. Combo this with Fateweaver as the Daemon HQ (who IMO  is one of the best HQs in that book anyway) and they have a very high probability of it going off. That means either a T5 3++ unit or a T4 2++ (MoT allows a maximum 3++, sorry for the confusion -ed) (Double Rainbow!! Er, I mean double edit! Someone pointed out to me that the MoT only buffs you to a 3++ but then AFTER that, the Grimoire buffs you to a 2++, what say you all?) unit….all with Jump Packs and Lightening Claws….yikes. Who needs Grenades with those kinds of stats?

But then I started thinking, what else has the Daemon rule in the CSM dex? Possessed, Mutilators, Oblits, Maulerfiends, Forgefiends, the Defiler, obviously the Daemon Prince and….by all that is holy….that mother #&%*ing Hell Turkey!!!!! Gah! 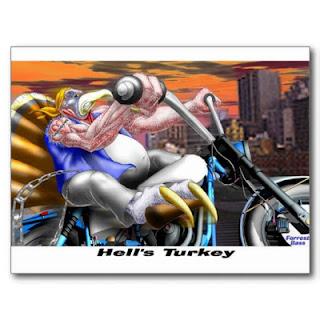 I already hate that model more than Osama Bin Laden, why in the name of the Emperor can it possibly get a 3++ on top of all the other inane rules it has?!

I mean, 2++ Mutilators, Possessed, and Warp Talons or 3++ Forgefiends, Maulerfiends, Defilers and Daemon Princes I can live with as I would like to see more of them on the table. But that rat bastard Hell Turkey doesn’t need any more favors!!

The only consolation I had in all of this existential anguish was the fact that there are half a dozen units in the Daemon book that are actually a lot scarier with the Grimroire but hey, we’ve all got our crosses to bear and mine comes with a giant space turkey on it!

So what do you all think about this nonsense? Cool to buff otherwise under-powered units to the point where we will actually see them on the table or just one more way to leverage already powerful units?

← Eldar vs Nurgle Chaos 1850pts
By the Numbers: Wave Serpents vs. Flyers by Mark H. →

Leave a Reply to stengaih