Thar be Eldars About! 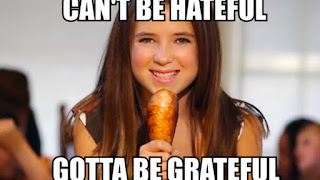 All hail the Eldar! Tights and Guy Liner for everyone!

My favorite army has gotten it’s makeover and I am stoked on this book! Reecius here from Frontline Gaming to discuss the new kid on the block: Eldar. Also, here’s a video bat rep of them in action with all painted goodies! Beware though, the occasional swear word lurks in that video!

First of all, to all the whiny cry babies out there that are doing nothing but boo-hoo over the new book: 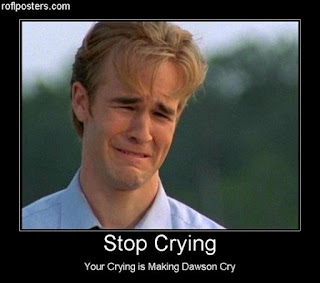 Get over it, already! This book is GREAT! Almost every unit got better! Even Swooping Hawks and Shinning Spears, huzzah!

Anyone who is sad because we lost things like Runes of Warding needs to check theyself, because that was the most broke piece of wargear this side of Psychtrole grenades. I was glad to see it go as it was a crutch and it made the game less fun, and that is coming from a long time space elf aficionado.

No assurance of Fortune of Doom? That is a bummer, but what did anyone expect? Every book has gotten hit with the random hammer, and it was inevitable. 24″ Guide as a primaris is great though, and with the ability to take it and Prescience–guaranteed–you can build rock solid list strategies around that.

No assaulting out of Transports? Again, Boo-Hoo. What was anyone expecting? Assault ramps on Wave Serpents? Again, Wave Serpents got BETTER! You just need to adjust the way you look at this book, take off your 4th ed glasses, and put on 6th ed goggle, and you will see how rich and well thought out this book really is.

All of our assault units got better and faster! Banshees move up the field at 6’+D6+3″ a turn while shooting (but should have grenades, striking simo into cover isn’t good enough for how fragile they are, IMO, but they are still an awesome, cheap counter attack unit). Scorps finally fleet, and have Move Through Cover and Infiltrate and Stealth, and, and, and the Claw is a melee weapon! What’s that you say, you declare a Challenge? Oh yes, thank you: pow, son! In the face!

Shinning Spears are actually good! Wraithblades are rock solid but not as fast which means again, no clear winner. You can buff these guys out with Spirit Seers and Farssers to really make them deadly. The Avatar once again sports 2nd ed style stats and has some customization to him. Pricier, more fragile than before due to a lower invul and no certainty of Fortune, but a fair trade for increased speed and offense.

The only assault unit that got nerfed was Harlies. Having to test for Veil is a bummer (first time I tried it, I perilsed and lost the Seer…and his power…and his grenades…ouch). However what I have found is that it means all of the assault units are fairly comparable as they are useful in different roles within the overall context of an army. There is no clearly superior choice (as Harlies were previously) which is good! It is good to have tough choices, it means the book is well designed. 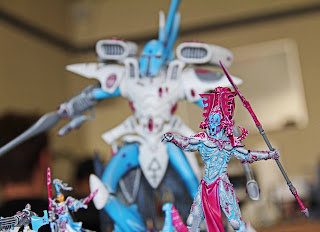 You see the same thing in the other units in the book as well. They are all viable. War Walkers actually got better, if you can believe that, and the improvement to Shuriken weapons is soooo good! Eldar have such variety and utility in their troops. I have been taking 5-6 units every game and loving them.

Wraithlords are more reliable now, Wraithknights to me look like an excellent utility unit (haven’t gotten to play one just yet, but will soon and I am not buying the internet whining, I think the WK has got serious potential).

The Monofilament units are AWESOME! They shred everything apart from heavy tanks. In our games so far they have been just beating the crap out of things and Warp Spiders especially have been amazing. They are Captain Insano fast! They fly around the table laying waste to everything.

Tons of HQ choices, all with various and very useful abilities and powers. You actually have a tough choice between utility characters, beat sticks, etc. Warlocks only being LD8 is a bit rough as you fail roughly 1/3 checks, and no Grenades hurts, too. However, their powers are so good it becomes a very tempting risk.

In all, this is a book that strikes a very good balance and one that I have found just an absolute blast to play. One of the things I love about Eldar is that they are good at everything, and do something in every phase of the game. Plus, Battle Focus is hands down my favorite rule in the game right now, and as a long time Footdar player, I am in Eldar heaven with the increased mobility this allows me. It is so much fun to shoot and scoot, really just a fantastic rule.

More so than ever before, Eldar is a thinking man’s army that requires planning and using units in concert with one another to force multiply their units from moderate to devastating threats. In general we lost some defense but gained a ton of offense. I am EXTREMELY pleased with this book and have not had this much fun playing 40K in ages. Apart from their somewhat weak AA (and we are coming up with solutions here every day) I think this is a home run. Plus the filthy combos you can pull with this book and Tau or Dark Eldar is straight cray, yo! Expect those combos to touch your army in inappropriate places.

I will write more in depth reviews as time permits, until then, troll on!

25 Responses to “Thar be Eldars About!”