Why’s Everyone Dissin my Boy the Wraithknight?

You are here: Home › 40K › Tactics › Why’s Everyone Dissin my Boy the Wraithknight? 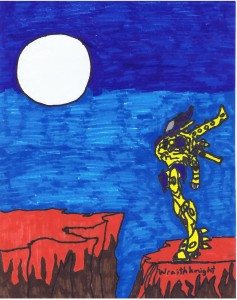 I see a lot of negativity about this guy online, and I am not seeing why.

What’s not to like about big dog? He brings a TON to Eldar. Besides being a prince among models, he is a multi-threat unit that can fill a lot of gaps.

For one, he is hard as hell to kill. Does that mean invincible? No, of course not. But 6 wounds at toughness 8 is immune to most small arms and with a 3+ not much is going to phase him. With the ease of cover saves this edition, his big toe can be in area terrain and he gets a 5+.

As someone who uses Wraithlords, Swarmy, etc. all the time, I can tell you a model at tough 7 or higher is really, really hard to kill.

Poison and Rending weapons are a threat, but that’s OK, focus on taking them out first. That is the game after all: taking out each other’s threats first and better.

What the Wraithknight does bring is powerful shooting. The Suncannon and Heavy Wraithcannons are really, really good. Doubly so because Eldar don’t have those types of weapons otherwise. Take a Scatter Laser to twinlink that Suncannon and good night, that is brutal.

The Heavy Wraithcannons add a really useful tool. Strength 10, AP 2 is extremely good AT and with Guide/Prescience not bad AA, either. Plus, ID on a 6 means they are a nice tool for other MCs, too.

Also, these guys provide counter attack. Jump Jets make them super mobile and Strength 10 and I5 gives them enough punch to really threaten key units. You can get tar pitted yes, but again, don’t let that happen. I see this unit being a shooter first, counter assault second. If you play a hardcore shooting army like Tau or IG, this unit may be better off going upfield to smash face.

I plan on adding one to my list and running it bear bones (as I often do) plasting things with twin linked cannons and then jumping out to assault where enemy pressure is threatening to collapse my lines. I think this guy will not only look amazing but serve a really useful role in a well rounded list.

What do you guys think about the Wraithknight? Worth it or no?

← Update on Eldar Orders
Thar be Eldars About! →

49 Responses to “Why’s Everyone Dissin my Boy the Wraithknight?”