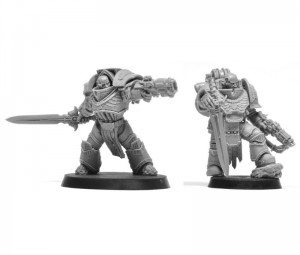 These look pretty awesome and I bet we’ll be seeing quite a few of them on table tops!

Praetors are the mightiest warriors and battle-leaders of the Legiones Astartes, second only to the godlike Primarchs in their martial skill and generalship. Each is a vastly experienced warrior and warlord, unique in character, who has writ a legend for themselves in blood and slaughter.

These lords of the Imperium possess a panoply of the finest weapons and armour known to humanity and hold the power of life and death over worlds, with direct control over entire war fleets and great armies. In their ranks can be found Chapter Masters and Lord Commanders, Khans, Tribunes and First Captains as the traditions of the Legions dictate; regardless of title each is a master of war, and each has conquered worlds unnumbered in the glory of the Great Crusade.

← Guest Editorial by Edwin: Waac vs Faac: The Two Extremes and Gamers Versus Hobbiests
Signals from the Frontline: News, Rumors, List for Review →