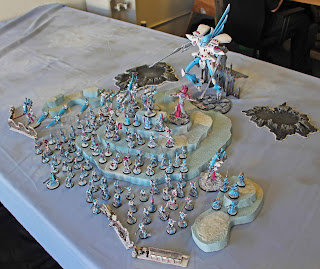 Oh shiny new toys, how you have captivated me! Reecius here from Frontline Gaming to gush about my favorite army: Eldar!

I love my Katy Perry Eldar, as I affectionately refer to them due to their very Eldarific color scheme. The interwebz have dubbed them the Mighty, Mighty Footdar, however, and either name suits me just fine.

They have served me well these years and have proven to be a super fun army to collect, paint and play (although for the sake of full disclosure, my friend Tyson Koch did help my finish painting them for a tournament). I love the fluff, the play style, and the aesthetic of the models. So, upon seeing these seXXy new models and reading the rumored rules, I am even more excited to add to my army!

That Wraithknight is something else, isn’t it? Looking at the pictures it may actually rival my Revenant in size! Our rep told us it was twice as big as a Tau Riptide, which is straight cray as that is a rather large model. The pics from White Dwarf do seem to indicate that it is a big old beast though, and I can’t wait to see these on the tabletop as they will be real eye catchers.
The rules sound great too, although so far we aren’t certain about the stats. Looking at it’s weapon load outs though, it looks very versatile as an assault beast or ranged weapons platform. Magnets will probably be a staple when assembling these to get access to all the fun options. If big daddy is a Monstrous Creature that will be fantastic. MCs this edition get so many benefits. Not taking fearless saves is huge, I can’t tell you how many times my Wraithlords have died of fright seeing all their little Guardian buddies get cut down in 5th ed. Also, the ease with which MCs get cover saves really helps to mitigate these models’ immense size, although it looks like he can get an invul save too, which really offsets that. 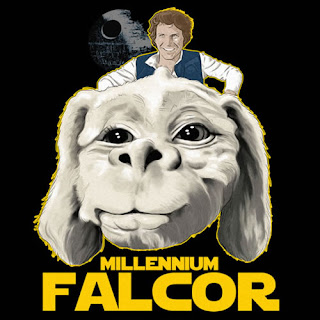 The Flyers also look really nice and I am very excited to add one to my army. The rules sound like it seriously packs a punch and if the rumors of Vector Dancer are also true, this is going to be a deadly air asset. If you’ve ever seen a Vulture in action, you will now how useful Vector Dancer can be. However, as these flyers will in all likelihood be Eldar tough (read: not tough at all) neutralizing those AA assets on the ground will be a priority.
The Wraithguard/Wraithblades are what I am actually most excited for. I have held off on buying Wraithguard forever because I assumed we’d eventually see them in plastic. The models are so much more dynamic than the previous models and I am very excited to get my greedy little mits on a unit of them! As we understand it, they will either be troops outright, or with a Spirit Seer.
The rules we’ve been hearing about of infantry being able to move, shoot, and then move again also sound AWESOME! As a long time Footdar player, that will make a huge, huge difference in board positioning and setting up firing lanes and ambushes. I think this is the rule that makes my happiest to read about and I hoep it is true. Fleet becoming universal for everyone apart from Wraith units is also long overdue and will help the army to feel like it plays closer to it’s fluff. It always amused me when a Terminator in a Shrike SM list could fleet and a Strikign Scorpion could not!
Keeping the well known Eldar psychic powers is also a big plus in my mind. It seems like we will not only be getting the old favorites, but a host of new powers as well. The rumors indicate that some powers, or all of them, will also have dual effects, either buffing your own units or being able to be cast on enemy units for a negative effect. If true, that is a great idea on GW’s part as it allows for so much more choice for the player, which creates tactical depth.
Cheaper vehicles, cleaned up rules for Aspect Warriors, special challenge rules for Exarchs? Sign me up!
These new toys and rumored rules have really captured my imagination and I am super excited to add to my army. What are the rest of you most excited for with the upcoming Eldar release?

11 Responses to “Oh My Sweet Eldar, Time to Upgrade!”

Leave a Reply to jmanj123