Signals from the Frontline: 25% Off Games Workshop Pre-Release Special is a Go!! News, Rumors, Horus Heresy, List for Review

Press play to listen to the podcast! 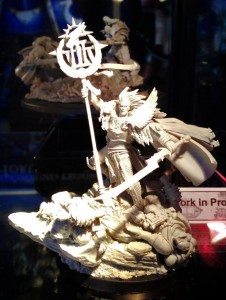 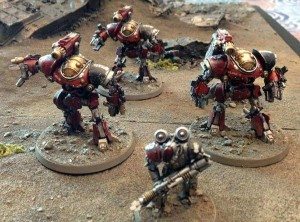 I feel this is a good all comers list.  The theory is that I missile whatever is deployed opposite of me. I think this army is good in Hammer and Anvil.

Just so you guys know, this army has 44 missile shots a turn, most of them can or will be twin linked.  It has more than twice as many missile shots as it has bolter shots.  I’m only afraid of LR spam, but I will glance atleast one down a turn.  It needs spotlights.

All the Hyperios Plats will get 1 glance on a LR, the speeders will get 1 glance, and with the reroll power, the missile devs will get 3 glances.  For Frankie’s sake that is 5 glances total.  assuming 5+ cover, that is 1 dead LR a turn.  If the dice go hot (and with that many missile shots that is a decent chance) I can potentialy do more than that.  Against termies, assuming im doing krak, thats 4.6 dead termis a turn just from the missiles.  That might not be enough if im facing DW and the DS ontop of me, but I think I can screen with the grey hunters, or the speeders if I really am desperate.

18 Responses to “Signals from the Frontline: 25% Off Games Workshop Pre-Release Special is a Go!! News, Rumors, Horus Heresy, List for Review”