You are here: Home › Warmachine › General Awesome, Oh How I love Thee! 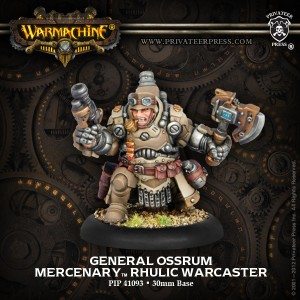 This little midget has made me enjoy playing Warmachine again!

General Ossrum, commonly known as General Awesome and for good reason. This guy is a boss dipped in boss sauce.

I play Rhul Mercenaries in Warmachine, the Dwarf faction. They are slow, generally overpriced, lacking in a lot of depth and until this little bad ass came on the scene, the weakest faction in the game. I don’t mind a challenge, so I played the Dwarves, but man, I always felt like I was trying to swim up stream. My previous caster, Gotren, was a tough little cuss, but his puny focus of 5 really, really hamstrung him. It meant I had to get close to do anything and close to the enemy is where a Warcaster, even one as tough as Gotren, gets smoked.

What would almost always happen is I would go in, smash my opponent’s army, and then my caster would get killed and I’d lose. It was fairly frustrating. If Gotren had even 1 more focus, he would be really great as his spells and feat are fantastic and he is a pretty powerful himself.

I found myself often getting out-ranged, out-maneuvered and beaten frequently by any faction that didn’t come right at me for a slug fest. It got old.

Then along came Ossrum! You can tell the game designers went out of their way to build a caster that was unique to the faction, but also shored up their weaknesses. He increases speed, range, hitting power, armor, and provides awesome board control abilities. He really helps to make my army of angry little people so much more enjoyable to play, and flexible.

Now I am by no means an expert at Warmahordes, really just a base level player to be honest, but I am picking it up pretty quickly and I really enjoy the game. I have only lost 1 game so far with my new and improved Dwarves to Skorne who pulled off a sweet combo, throwing my heavy jack in front of my caster, then getting him slammed through my caster, knocking him down, and subsequently getting squashed by the Warbeast who had follow up. Nicely done on my opponent’s part as next turn I had his Warlock dead to rights!

As I learn more about the game and get my stuff painted, we’ll post some bat reps, but I just have to give some props to my main man Ossrum for making me like the game again, and pour a bit of my 40 out to the now dead and burried Gotren. He was a good homie, but he just didn’t have the swagger of the new kid in town!