You are here: Home › magic the gathering › Tactics › Guest Magic Article by Ethan

Hey folks its Ethan and I would like to talk with you guys about the Dragon Maze spoiler season.

Spoiler season is one of my favorite times for magic, it’s a time where I can really get the deckbuilding juices flowing and speculate about the standard meta to the extreme (note, I don’t play much besides standard).  Now the most important part of the spoiler season is the cards. To start things off I’m going to look at one of my favorite things in the new set: split cards. 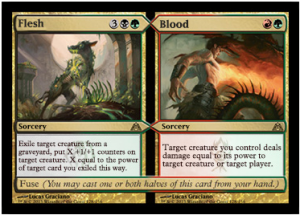 This card in particular (Flesh//Blood) is in my opinion one of the best cards in the set, particularly for a creature oriented deck. Blood is a particularly powerful effect and as everyone knows in the past few years, creatures have been getting better and better, and Blood is set to take advantage of this. Blood can be used as removal, as direct damage, and combos exceptionally well with the Gruul guild mechanic (Surprise!) Bloodrush. Blood can take advantage of the extra power afforded by Bloodrush and turn it into damage.

Blood might will fit well into the current Naya Blitz deck, in which it might replace searing spear as removal and damage, it would particularly synergize with the speed champion of the parish grows at. Flesh is also powerful, though I don’t consider it quite fast enough for the ability it renders. Flesh, like blood synergizes with Bloodrush, allowing you to get extra value after you discard the creature. Ironically, Flesh conflicts with the Golgari keyword scavenge, requiring the use of two cards to achieve the same effect. Flesh does however show promise in that it can target opponents creatures as well creating advantage while helping prevent or at least slow the prevalent reanimator strategies dominating the current meta.

An important thing to note is the new split card mechanic: Fuse. Fuse is elegantly designed and powerful, allowing players to get more value from split cards. Important to note is the clause “from your hand.” Preventing any Snapcaster shenanigans using both halves of the split cards.  Also important is the order of effect resolution; the cards effects although a single spell, resolve from right to left, so for Flesh//Blood one would exile a creature and place the counters equal to its power on target creature, and then deal damage equal to one of your creatures power to target creature or player. This card is very powerful, and could easily be a format staple if it had instant speed, as it is, it is still very playable, it will just have to find a home in the right deck. The next card I want to talk about is Varolz, the Scar-Striped, The Golgari guild’s maze runner. 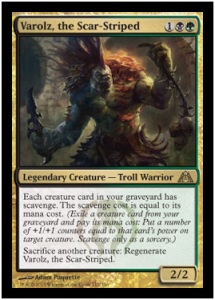 Varolz may have a bit of a strange name, but this troll is extremely powerful. Giving scavenge to all creatures in your graveyard equal to their converted mana cost can be easily abused. Cards like Death’s Shadow (that was sold out in most places almost as soon as Varolz was spoiled) and force of savagery can give loads of +1/+1 conters for cheap; Varloz might soon make an impact on modern. Additionally he resists removal and is a handy sacrifice outlet. As far as standard is concerned Varolz combos exceptionally well with Vexing Devil; take four, my guy gets +4/+4 permanently. Valrolz is one of the best maze runners previewed as of having a place in modern, and standard. He also looks like a kick ass general for EDH, though similar to Kresh.

That’s it for now, let me know if you like the articles and I will keep them coming!

Posted on May 5, 2013 by Reecius in magic the gathering, Tactics

← Signals From the Frontline: I Discuss New Games Being Released, Some Interesting Internet News, And Some Cool Miniatures Being Released.
New Magic the Gathering Set in Stock: Dragon’s Maze! →