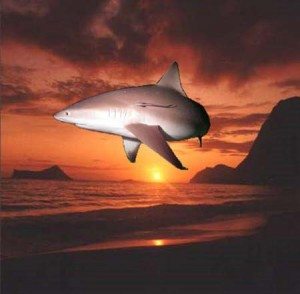 Hello everyone, Dr. Insanotron here from Sinister Wargaming and today I would like to talk with you a little about what I think is one of the most over looked units in the new Tau codex – the Sun Shark Bomber.

No one seems to be talking about the Sun Shark and what it’s capable of offering a Tau player. The Sun Shark is one of best multipurpose units in the new book, and once people start to realize how good they are – the Shark will quickly be regarded as one of the best fliers in the game.

In every practice game that I have played with one of these bad boys it has performed beyond every expectation I have had for It. The model isn’t the best thing Games Workshop has put out recently, especially when compared to the new Riptide and Broadside models but its still looks good on the battlefield.

Okay, so I know what you’re thinking, “Yeah right Dr. Insanotron, how could they ever compare with the Heldrake, or the Vendetta?”

All together this gives the bomber up to six twin-linked strength 7 shots and two strength 8 missiles in addition to the strength 5 large blast. An important thing to keep in mind about these weapons is that they are mounted on turrets, allowing them to fire behind the bomber, this is a huge advantage when trying to take out other fliers.  Six strength 7 twin-linked shots in the tail pipe is no joke – not even for the Heldrake. Throw in the networked marker light that can also fire behind you and this allows you to raise the BS of these shots to 4, and 3 for the drones or it lets you fire one of the seeker missile at BS 5. No enemy flier in the game will like being hit by that much fire power.

Against infantry the pulse bomb generator has the potential to devastate – especially against units with low armor saves. The Drones can use the overcharged mode on the ion rifles to drop 2x twin-linked strength 8 small blast templates in addition to the shots from the missile pod. Even Space Marines will start to feel the heat simply from the massive number of saves they will have to take.

Another great use that I have found for the Sun Shark is their ability to take out flying Monstrous Creatures. when trying to take out the likes of flying MC’s I just let it rip with everything it’s got, the missile pod, drones and both seeker missiles. On average this will cause between 2 and 3 wounds to the MC. But there’s one more nasty little surprise, the drones and the bomber are technically two separate units that have to shoot at the same target as long as the drones are still attached to the bomber. So when they hit it will force the MC to take two grounding tests. This gives you a pretty good chance to ground it and inflict a strength 9. ignores armor hit.

It’s also important to note that the two drones on the bomber also have the interceptor rule allowing them the chance to damage or destroy other fliers as they come in, this can be really  useful if the Heldrake tries to vector strike you out of the air and doesn’t bring you down he will more than likely be giving up rear armor shots when your drones intercept. It also lets you drop your there strength 8 small blasts on deep striking units before they get a chance to fire.

Another great little tactic I’ve come up with is what I’ve been calling the suicide bomber. This is a great way to take out high front armor vehicles like the Lemann Russ, or the Predators which have become harder to take out since we’ve lost a lot of our strength 10 railguns.

So here’s the deal.  You fly the bomber straight at the tank its full 36,” (make sure to drop your bomb on something you fly over) then use high velocity deployment to disembark your drones 6″ forward because the drones are jetpacks that can move over enemy units to a position right in the rear armor of there target. Then you use the marker light and let the drone use it.  If you score a hit then they rapid fire 4 twin-linked strength 7 shots.

These are just some of the cool things I have been able to do with these little bad boys and I’m already working on other tactics I’d like to try out. I hope you all give these guys a chance and post up some of the ideas and tactics you come up with for them.

Until next time keep serving the greater good.