You are here: Home › 40K › Dropzone Commander › Editorial › Firestorm Armada › Why go to Events Like Adepticon?

Well, we’ve put another great event on the books this year. While everyone else talks about the lists and tactics that took that big dogs to the top of the heap, I’d like to talk about WHY going to these events is so much fun.

A lot of folks on the interwebz like to poo poo on tournaments, tournament players, tournament lists, kittens, rainbows and orphans.

Perhaps not so much the last three, but definitely the first three. That always cracks me up. On the one hand I do understand the common perception that some folks have of what it means to go to a tournament. Perhaps at a local event they played a rude person, or perhaps they’ve read it a number of times online and believe that they will meet a rude or unfun person. Perhaps they think it will be all broken lists and will get curb stomped every game, etc. etc. etc.

Who knows, but I have met a lot of folks with that perception both online and in person and they simply choose not to go. Fair enough, it is a choice and I respect that. But as an individual that has gotten so many new and sincere friendships, fun and memories out of these silly toy tournaments, I would be doing you all a disservice by not sharing my thoughts on it. 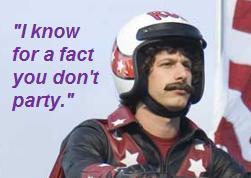 If you aren’t coming to the big events, you are seriously missing out on a ton of fun. Forget the actual playing of minis games competitively. Even if you think that is lame, there is SO much more going on. Ask nearly  anyone who goes to big tournaments on a regular basis why they go and they will probably say the same thing: they get to see friends they only see at these events and have fun.

Tournaments are growing rapidly all over the world and not because the number of douchey WAAC jobs has somehow increased, but because the sense of community we get hanging out with friends who share a common love is awesome and those who go, come back next year and bring friends. It’s why we do this and not play video game tournaments.

You get to go, play some fun games against challenging opponents, see BEAUTIFUL armies from all over the place, and go out after for dinner, beers, and memories with like minded people. Trading war stories of those clutch moments where you won or lost the game after the fact is as much fun as when you are actually doing it! As you go to more events, and do this with folks year after year, real friendships begin to form. You put faces to the screen names you engage with or read about online all the time and see they’re just nerds that love war games just like you. 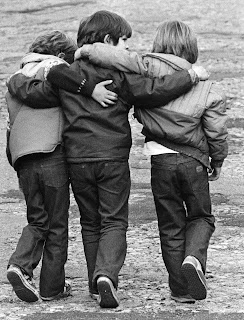 Not going to these events because of a negative preconception is biting your nose to spite your face. Truly, it is. Going to big events means you get to go out into the broader community, make friends and expand your knowledge of the game and ideas on what this hobby can be. You get to see new painting and modeling techniques and talk to the people that use them. You get to play new games, see new company’s products, etc. It is a total blast and worth the time, money and energy to get there.

Even when things don’t go as planned, you can still have a great time. For example this year, I lost my very first game in the 40K championships, knocking myself out of the event! Haha, all that preparation getting my Nids painted and I was out from the word go. Oh well! I still played 3 great games after that and my last game against Paul Murphy (yes, I drew him third year in a row!) was an absolute riot. We went through a bottle of Whiskey and the better part of a 30 pack, only got through 4 turns in 3 1/2 hours because of an impromptu shirts off dance off, and general outrageousness of the game. We decided to call it a draw when we couldn’t remember how many wounds Swarmlord had after a 30 minute, hilarious drunken debate on the topic! It ended up being the most fun game of 40K I have played in a long time despite the fact that neither one of us could go to the finals. 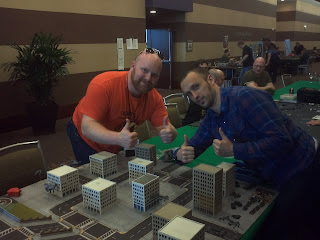 Since I wasn’t playing the rest of the time, I got to try a bunch of games I’ve been meaning to play like Drop Zone Commander, Deep Wars, Infinity (tried it, but great to play it again), Firestorm Armada, X-Wing, and check out a bunch of new vendors and products. It was great! I had just as much fun demoing the new games as I did playing 40K and now I have a working knowledge of and enthusiasm for some new games to bring home to my friends locally and to sell in our store.

In short, do yourself a favor and open your mind to large events. People fly all over the country and the world to attend these cons because they are FUN! If you are willing to stop trolling the comments section of BoLS long enough to go out and try playing with new people you may just be surprised at just how much more rewarding this hobby can be.

See you out there my fellow nerds! Reecius out