Some Pics from Adepticon!

You are here: Home › 40K › Dropzone Commander › Firestorm Armada › Some Pics from Adepticon!

I took them with my cell phone, so they aren’t anything super special, but they should give you an idea of what was going on!

A shot of the 40K Team Tournament. 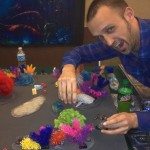 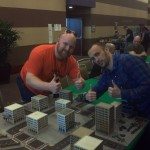 I had a lot of fun playing Dropzone Commander. 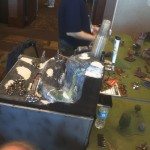 An even more awesome display board only because it had a full keg in it! 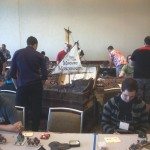 An awesome display board. 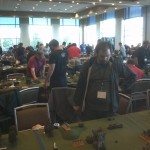 A shot of the Fantasy championships. 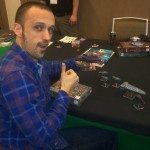 The Firestorm Armada ships were much bigger than I had imagined. 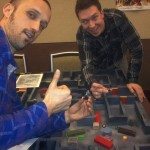 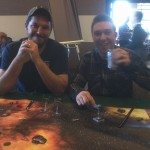 So it was a great time this year as always. We are bummed that our entire team got knocked out in the qualifying rounds, but hey, them there’s the breaks. I still did quite well with the old Nids, but not enough to go to the finals this year.

I did get to try some great new games though, which I really enjoyed a lot. We played X-Wing which I had ZERO interest in prior to this. Gave it a go and I have to say, it is a total blast. I really liked it.

Deep Wars was my favorite though. An underwater themed skirmish/RPG minis game that pits bands of crazy underwater gangs against one another in a super interactive, and dangerous environment. Here’s an example of what I mean: my funky fish warrior stabbed Jouglas’ Bioshock looking deep sea diver (equipped with a Gatling spear gun, no less!), shocked him do my guy have Electric Eel like powers which sent the stunned, and not so lucky diver into the jaws of a giant clam who subsequently ate him! haha 3D movement, your guys level up, it’s a ton of fun.

Dropzone Commander was very simply, but super fun. I definitely will be picking up a force to use for the store and show to folks. I just really love the aesthetic.

Firestorm Aramada was good fun. Again, a pretty simple game, but good fun, and the ships are really gorgeous and way bigger than I had expected.

Infinity was awesome, love the mins. That was my third run through of he game which is very complex, but good fun, too.

We also saw a ton of new minis and games. Robotech looks pretty, but as far as I could tell, there wasn’t a lot of variety on the Zentradi side. Just a lot of pods for now, but perhaps that will change.

Tons of awesome terrain, great people and fun. Adepticon really is awesome, it is definitely worth the time, energy and money to go.

← Signals From the Frontline: We Discuss GW Releases, Adepticon 2013, Along With Some Games We Tried Out.
Awesome Video of the the G3SC Event! →

12 Responses to “Some Pics from Adepticon!”