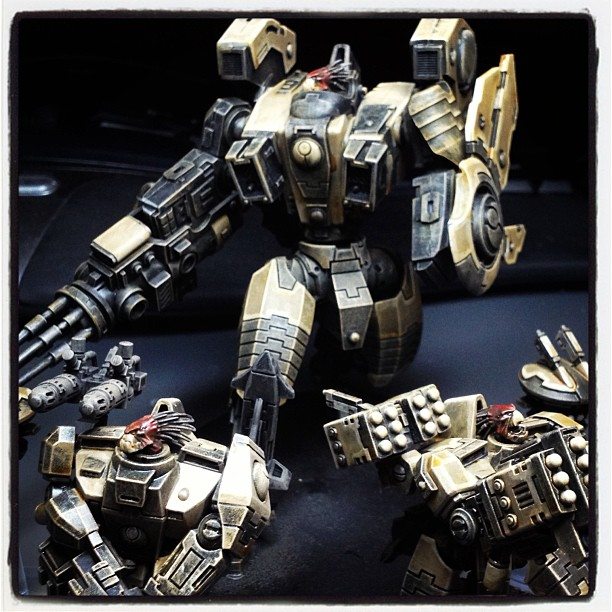 So I just finished my first game with the new Tau!

Even though I got a new mud-hole stomped in my butt and made a lot of mistakes, I had a lot of fun and learned a lot. Making mistakes is all a part of the process though, and you just take it in stride while learning a new army.

Tau are still a difficult army to play well. Maybe even more now than before. They simply don’t have any units you can just shove down your opponent’s throat like many armies do. All of their units are very fragile in assault (read: get touched in assault and die) apart from Farsight (who still isn’t great), and they have some subtle changes that really effect the way the army plays.

I wasn’t using the units I would have chosen to use under ideal circumstances, but it is what we had available and painted.

Roughly I was using:

I was playing against a Chaos and Chaos Daemon army that was pretty dang solid.

The other important factor to consider was that my opponent was having red hot dice when we played, making a crazy amount of saves.

All of that said, I think Tau are a great deal of fun to play. You just have to REALLY think things through, at least a turn ahead. Everything depends on that delicate dance of getting into maximum damage range, but staying out of assault range while utilizing force multipliers and synergistic elements to maximize what you’ve got. If that sounds a bit complex, that’s because it is!

Here’s some of what I learned.

The Devilfish sucks balls as a transport. They work decently as a cheapish gunship, perhaps transporting a minimum sized unit of Firewarriors, but the loss of Tau vehicles being able to fire as a fast vehicle really hurts. It entices you to keep your vehicles immobile to fire at full effect, which is often the kiss of death in later turns when enemy units close to assault range.

Longstrike isn’t worthwhile, IMO. Unless you play in a meta with IG all over the place, or tons of Mechanized armies, he is wasted points. Against your average infantry heavy army, I think you will be seeing his abilities largely wasted. Better to keep your Railhead cheap. Speaking of which, after having played the Railhead and Ionhead, I have to say, I think the Ionhead is the better choice. It’s more versatile: that strength 8 template is so dang useful. It lacks the punch of the Rail Cannon solid shot, but I think that is OK. Unless you face a lot of AV14, it’s wont matter that much. The Railhead is more of an insurance policy for that occasional Leman Russ or Land Raider.

Stealthsuits are slightly improved. They get an extra shot per model, and the increased range on the Fusion Gun is great, but I still doubt we’ll be seeing much of these guys in competitive play. Tough 3 is just too much of a bummer. For 2 points more, you get a Crisis suit with a Burst Cannon, 7 points and you get a twin linked Burst Cannon…plus an extra wound and point of toughness. You lose out on infiltrate and Stealth plus Shrouded which does make a big difference in cover but I think the increased durability of Crisis suits will be more useful overall.

Crisis suits are still very versatile. Just as with last edition, my favorite load out so far is twin Missile Pod and Flamer. Now with free Multi Trackers and Black Sun Filters, they are even better. That unit gives you a ton of flexibility. You can deepstrike in to take out a key, unit, fight light tanks, flyers, and light infantry. It really allows you to do a lot for a reasonable price tag. Plus, with Multi Tracker and Missile Pods, the Flamers can reach deep into a unit to scorch some booty! Plus, being able to Deep Strike is great. Deployment options makes for an army that is just so much more flexible.

The Ethereal is seriously good. I see him finding a place in a LOT of lists. That LD10 aura is immensely useful and in our first game saved my bacon at least 6 times. He kept units from running off of the table, and was a low priority target himself. For 50pts, you really are getting a big return on investment, particularly if you use a lot of infantry and suits, which I predict most Tau players will be doing.

The Fireknife Crisis suit teams were OK. Nothing great. They heavily rely on Marker Light support to really do anything. With that, they can be pretty deadly, but without it they miss a lot and frustrate you! Haha

The Commander was great. I went overboard with the defensive upgrades, big time. I think Iridium armor is plenty good. He never even got shot and unless you find yourself up against a lot of high power shooting attacks with Precision Strike, don’t sweat it. Give him more offensive punch, instead. I think in future games I will run with the Airbursting Frag Projectors.

Teaming him with Gun Drones though, was awesome. He makes that unit just deadly. Beefing them up to BS5 is deadly, and the extended range of his Missile Pods, again, really helps to make them very much more effective by estending their kill zone. His Warlord traits are very useful too, and can be game changing. In our game I got the trait that allowed Skyfire once per game with he and his unit, which was very useful. I am sure there are a million more combinations of wargear, warlord traits and units to use with him, but so far I thoroughly enjoy this unit.

Broadsides. They are a hot topic out there with now. I rolled like utter piss for mine this game, but I think they are all but required. They add SO much. Velocity trackers are really important for them and I think Shield Drones, too, just to soak wounds. These guys will thrash a lot of units out there, including most flyers. I am leaning towards taking High Yield Missile Pods right now, as it blends so well with Smart Missiles. Plus, they are really good against low AV targets….like Flyers. The 2+ and 2 wounds means they will weather the storm of most flyers very well, and then counter with deadly fire. I think these guys are going to combo with Skyrays REALLY well. I wish I would have had a Skyray instead of a Hammerhead in our game. Those are going to be fantastic tools in Tau lists.

The Pathfinders were amazing. I think the 4 man units are just right, but they risk giving up First Blood soooo easily. Beefing them up a bit, perhaps to 6, is probably the better call, but 4 man teams worked quite well. Tetras are the better bet if you play with Forge World, but Pathfinders are money and Marker Lights are critical to making Tau function at max efficiency.

Kroot. Hmmm. They were OK. My opponent focused on them because they were really the only thing I had that could do a lot of wounds to his GUO in a single volley, so they soaked an inordinate amount of fire. I think a unit of them will be pretty ubiquitous in most Tau armies though for their flexibility. 7pt Snipers that benefit from Marker Lights are awesome. They are a good answer to MCs, Termies, etc. Plus they can Infiltrate for deployment options and outflank. They are quite a useful tool, but two units was one too many, IMO.

I think this army would work much better with a Riptide, and some small changes. The Devilfish are a waste of points, IMO. Perhaps others like them in certain builds, but I was underwhelmed. A Riptde with Ion Accelerator, Twin Fusion and Velocity Tracker would be pretty sweet. That gives you a resilient unit with a lot of AP2 shots and the ability to drop Flyers like a bad habit. Plus the model is the absolute bomb dot com!

Here is the 1750pts list I am considering. I think it will be quite a bit better. For 1850, add an Aegis with a Quad Gun. Still so much to learn with Tau as they play so much differently, but I am enjoying them so far.

13 Responses to “Tau in Action”