Guest Editorial by Fleet of Claw: Why I love Zoanthropes and You Should Too!

You are here: Home › 40K › Editorial › Tactics › Guest Editorial by Fleet of Claw: Why I love Zoanthropes and You Should Too! 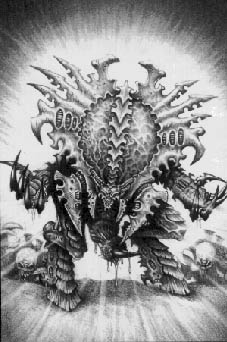 A guest editorial by Fleet of Claw.

Back in the winter of 2011, I returned from a 4 year 40k hiatus. Being a bug player since 3rd edition, I was utterly disgusted when I saw the 5th edition codex and the complete mockery it made of my beloved Tyranids! It wasn’t just the ways in which they were nerfed, but the way that the very heart and soul of the army was snuffed out that disappointed me. My big bugs were fragile and insanely overcosted, my swarms vaporized to fearless wounds, etc. Well thank the Hive Mind I didn’t have to wait long before 6th edition arrived on the scene and magically turned my steaming pile of a codex in to an incredibly competitive one. This, I believe, is in large part due to the new psychic powers that the core rulebook offers us (not that there aren’t other benefits to 6e… good riddance fearless wounds!).

What hasn’t changed from 5th to 6th edition is how crowded our elite slots are with viable competitors. Aside from a few obvious stinkers *cough* lichtors & pyrovores *cough* there are some great options. Today I’m here to tell you why you should heavily consider taking Zoanthropes in at least 1, if not 2 of those slots.

I know what you’re thinking, everyone has Deny the Witch, Eldrad must have cloned himself a billion times and is crawling all over the galaxy, not to mention those pesky Rune Priests. What you need to do before tossing the big brained fellas under the bus is realize that the Zoanthrope’s role has changed. Don’t get me wrong, any gun that can pen a Land Raider on a 3 and blow it up on a 4 is pretty wicked, but when you have to pass a psychic test (potentially on a 3d6 thanks to Runes of Warding), then hit, then pen, then roll damage, Deny the Witch, oops here’s a 4+ shutdown from a Rune Priest… yeah it gets ugly pretty fast. It’s so many freaking dice you have to throw, and the more you have to roll, the more opportunity for failure.

Well forget all that. Gone are the days of short range tank busting, our Zoanthropes have become the ultimate buffers and debuffers. In a brood of 3 Zoanthropes you have very high odds of snagging Endurance and Enfeeble (two incredibly clutch powers), or Telekine dome and Objuration Mechanicum. All of a sudden you have a very durable psychic juggernaut that can force multiply your army in devastating ways and is very tough to take down.

Without delving in to the virtues of all of the powers available to Zoeys, the most obvious are powers like Enfeeble. Think of Enfeeble as a way of effectively Iron Arming your entire army against the target unit. Nothing is more hilarious than watching Paladins get blood misted by gargoyles or gants with two casts of enfeeble.

And let’s face it, the only thing that has made the Swarmlord and his little brother, the Tyrant, even remotely cost effective in 6th edition are the rulebook powers. Right out of the box, these guys don’t require a whole lot of dedicated shooting to blow them off the table. But with powers like Iron Arm, Endurance, Telekine Dome, or Invisibility they become much tougher to take down. So what about that Eldrad or those Rune Priests that everyone is so convinced make Zoeys useless? Any time I see those guys on the table, I’m thanking my lucky stars I have Zoanthropes! Who better to chance a perils to get a critical Endurance or Telekine dome on Swarmy than a 60pt Zoey? In fact, it’s when I’m facing those psychic defenses that I more frustrated to be caught without any floating brains in my list! Without Endurance a Tyrant or Tervigon has to either risk perilsing themselves to death or catch missiles and lances with their face. Well, good sir, I say there is a better option! Brain bug time!

You also can’t forget the other ways in which Zoanthropes contribute. When your Tervigons start going down to heavy firepower, the Tyranid army is a house of cards that can start folding quickly. Zoanthropes, however, help strengthen your synaptic web, keeping your gribblies fearless and in the fight for those critical moments they need to stay on an objective or keep an enemy beatstick tarpitted. And not least of all, Zoanthropes widen the Shadows in the Warp bubble on the table. This is the ultimate “fight fire with fire” when it comes to the likes of Farseers, Rune Priests, and any other enemy psyker.

Also Zoanthropes are incredibly survivable given their point cost. On average it takes over 13, strength 8 shots from a BS 4 opponent to take out a brood of 3, making them a tough nut to crack! What’s more, you can still cast maledictions and blessings while in combat, so they can tarpit a unit and still dish out powers.

At the end of the day, Tyranid psychic power has become its own bizarro mini-game before the first shot is fired; roll 18 billion dice and see what you get. Sometimes you come up big and sometimes you come up short. With Zoanthropes you get that many more chances to get the critical powers you need to keep your big bugs alive and your food a tasty pile of quivering goo. Regardless, they provide a durable lynchpin to keep your swarms fearless and rolling forward so they can properly enjoy their meal.

9 Responses to “Guest Editorial by Fleet of Claw: Why I love Zoanthropes and You Should Too!”