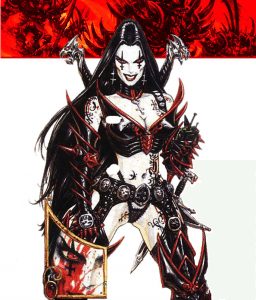 Here’s a list I have been toying with that I thought would be good for some conversation.

I love Dark Eldar. The models are amazing, the fluff is compelling, the art is great, and I really dig the play-style.

So far we have seen that they are holding up very well in a competitive setting, too. At Comikaze and Duelcon, DE were performing admirably. They have the tools to face all of the increased infantry heavy armies were seeing these days, speed, and plenty of scoring options. Plus, with the access to plentiful and cheap Dark Light weapons, they can easily bring enough anti tank to deal with the occasional AV14 spoiler list.

They also have brutal assault units in Incubi and Harlies. Wyches really got hamstrung with the new assault rules (Overwatch brutalizes them) but I think a savy player could still make them work with some effort and being a cheap 4++ meat shield for a combat character in assault is really useful.

Archone are the business, no surprise there.

However, with Eldar allies, DE really come to the forefront. Doom + DE = Uber Pwnage. Being able to increase the efficiency of poison weapons and agonizers by 50% is amazing. That power alone makes taking Eldar allies worthwhile, but combine that with fast, cheap scoring units (Jetbikes), Fire Dragons with their inherent AT plus how incredibly potent they make Quad Guns, and Runes of Warding, and I would go so far as to say that they are a necessity in a true TAC DE list.

Here is the list I have been toying with:

The Archon is a beat stick with the ability to power up to a juggernaut if he kills a few IC’s of MC’s. The Baron gives you incredible utility, +1 to go first and Hellions as troops, whom I love. They are very good at shooting and assault, not top notch, but good enough at both to make them a threat to pretty much any army’s support units. Their speed allows them to get there and their scoring status makes them an all around great unit. He rides with the Wyches in a Raider with the Doomseer. The Doomseer, obviously, casts Doom.

Warriors have turned out to be a fantastic scoring unit in 6th ed, in our experience. Frankie and I have been talking a lot about using Warriors in Raiders with Splinter Racks as a great AI unit, plus a Dark Lance for AT duty, plus speed and scoring power. The 15 man unit plays midfield, they can man the Quad Gun, hold a backfield objective or move upfield to take one. They can be joined by the Baron or the Doomseer to give them a boost. For relatively few points, they provide a lot of utility and increased durability over the 10 man units.

The Jetbikes do their thing: reserve and grab objectives late game, hiding in Purge the Alien.

As mentioned, the Hellions are a free safety unit, plugging gaps, hunting support units, taking objectives and in general just being useful.

The Friedragons hunt tanks in most missions, and man the Quad Gun when Fliers are present. With Tank Hunter and Crack Shot, they are pretty much one shot, one kill on damn near any flier in the game.

Heavy Support has a Ravager of each flavor (the Disintegrater Ravager is a great tool for taking down MCs and heavy infantry). The Razorwing is a great tool for taking down other Fliers, Tanks and Infantry. The Void Raven is a solid choice too, but the flexibility of the Razorwing is what wins it for me. Why this Flier doesn’t have Vector Dancer is beyond me, but hey, it is still damn good.

This list to me has all of the tools you need to succeed in 6th. I have my heart set on making a DE army at some point (after my Nids, TAC MArines and Orks, hahaha) and as of now, this is the list I am feeling the most confidence in.

Leave a Reply to Jaybie