Goatboy Reacts to my BoLS Article and Call me a Poop Face!

You are here: Home › 40K › Editorial › Goatboy Reacts to my BoLS Article and Call me a Poop Face! 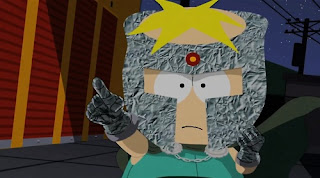 Below is the article which you can see over at BoLS. And just for the record, Goatboy and I are friends and I like to see his counterpoints on my article.

Goatboy is back and today I want to do a counter argument about Reece’s lovely article on the new Chaos Space Marine codex.

Now I do understand his points and really a lot of the commentators seem to hit it on the head with the idea that Reece just couldn’t break it so thus the codex is a FAIL.  So with that in mind let’s break it down and give some counter arguments on how the book is actually good and I think that some players are just missing the opportunity to try something different with the game.

First of all – the Necron, GK, and IG books are really a bit too much.  If you take the book entirely and not just on a few units that are copy, pasted, and copied again then you see those books are actually ok.  There are some extremely efficient and soul crushing options that people only take and that clouds our judgement of the book in whatever environment we think that “competitive 40k” needs to survive in. These options create this culture of “Fail” and list building winning every game with the power of it’s math punch.

I know I have been a proponent of a lot of terrible lists.  You can see in the constant comment cycle in some of my articles and the opinions of people who have never meet me.  This is fine as really whatever game you play is the right game for you to play.   I just want to give some counter arguments to the article and say – Chaos is a-ok!

First of all let’s look into the initial meat and bones issue.  The lack of must have units in the book (beyond 2 Dragons as Reece pointed out) seems to be the case for most reviews of the book.  I know I even reviewed the book in a meh way as I just looked at it from the math perspective instead of the playing side of things.  As I have played with the book more and started to enjoy its interactions I am really finding the book to be a lot more fun then initially inspected.  I like that every list I look at changes from week to week as I decide how engage my opponent with my nonsense.

The troop options are varied and that is good.  When have we had a book with this many troop choices?  When have we had a book with so many avenues that we can easily build an army in any direction?  How about a book that is specifically designed to use Allies to help fill in holes or shore up an option? You want a cheap scoring option?  You got it.  You need some fearless butts to hang around?  I got that for you too.  What about some ability to push covering the board in 3+ bodies?  Oh I got that for you too.  I also have a neat flyer that does some crazy things.  You can’t transport it that well but sure makes your friends mad when you poor some hot lava on their heads.

The biggest complaint I see is that everyone seems scared of rolling a leadership test.  I know we are all used to either “stubborn” options or ATSKNF so we are a bit jaded when we have to worry about passing a test.  I know this can suck and if you have played Fantasy you know this can make or break you in some games.  But come on – this is a game and stuff like this will happen.  How many times have you won a game on that lucky tank shock?  Leadership is not an issue as other armies have to deal with it. We just think that not having a trick around the rules automatically makes the army a bad choice.

I also hear complaints that it isn’t just an easy win.  I know we all miss our nutty 3.5 but we can’t expect a game to remain healthy if every book is just an auto win.  It is exciting to actually work to get the game in the bag.  The whole time I played Grey Knights I found it pretty boring.  In fact – I rarely played and just had my GKs sit in a case for events.  With Chaos I am all about trying something new.  I haven’t gotten bored yet and that is the “win” of the book. An “EasyWin” codex means the book is bad, not good.

I also hear how a lot of options are too expensive.  I know this book can bloat out but we can also go the opposite way and easily flood the board.  I know we want all our models to be the ultimate kick ass option but really – shouldn’t this game be fun for my opponent too?  I know that is the serious issue we have here in the game as people are not looking at how your opponent gets to interact.  Look I like the fliers as it is fun to zoom around but 6 turns of your opponent sighing as they try to roll a 6 on a Plasma gun sucks ass.  So hooray for a book that is more designed to play the game instead of just play on your opponents nerves *cough nightscythes*.

I know we all can’t be as lucky as some books who have misrepresented costs.  We decided to do a math experiment with the lowly GK strike squad and decided to be fair and within other armies rules a single guy should cost around 30 points (I still say 25 but hey… I can’t win them all).  I am just glad that my CSM book isn’t just pissing off the majority of other players and making an event a 25% steel and red highlighted mess.  It also makes me have to seriously think about my builds as well as I try to fit in the answers I need.

I am thankful I got a new book to obsess over. I knew we weren’t getting the old 3.5 book back as that one didn’t work in the game.  I knew that this book would most likely be a stepping stone for future mini releases as we get some of the later 6th edition books.

I was hoping this book wouldn’t be just another GK/Cron list with people jumping on for the flavor of the month.  I like to win – but some of those other books don’t feel like you are playing with the opponent.  It feels like you are playing at them and I have issue with that.  I don’t need to win to make me feel better with my life.  I have only a certain amount of time to play and I want to have fun.  I enjoy the competitive nature of tournaments and think this edition actually fits in that mold very well no matter what the chatterbox says.  Any game that has solid rules to govern your actions is designed for “competitive” play.  I know people think the random nature automatically removes that from the game but I just think it actually makes it a game instead of a spreadsheet.  But that is for another article as I delve into the idea of the competitive scene.

Currently I am experimenting using Orks as a nice bit of meat to hang my army ideas off of.  Will see if I can get things working right in the coming weeks.  I want to move away from abusing flyers for a bit and try to get some boots on the field to work.  So in conclusion CSM is a good book.  It gives enough to make interesting lists and won’t be on the whole “ban this book” bandwagon a lot of commentators like to jump on.  Also Reece is a poop face. 🙂

← Face Puncher Is Back With His Take on 6th!
Signals from the Frontline: News, Rumors, New Releases, List Review →

21 Responses to “Goatboy Reacts to my BoLS Article and Call me a Poop Face!”