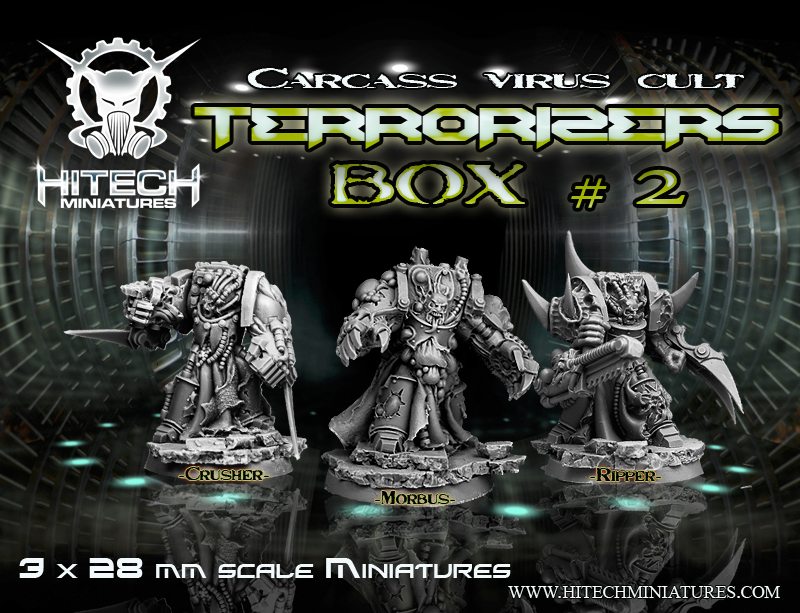 As usual, these models are not cheap, but they are also very cool, again, as usual.

Posted on November 26, 2012 by Reecius in Alternative Miniatures, News

Not that I know of, honestly. I cruise the net every morning looking for cool stuff to repost here, and HiTech is always really solid with their releases.

Thanks for that list, Terence. I thought he meant a site with a lot of different manufacturers all in one place, but that is a good list of some of the small manufacturers to check out.

Kromlech is another really good one.

No worries; I’ve got multiple commission ideas bouncing around in my head, so I’m fairly familiar with a number of them.

Kromlech is up there (esp. with their Zephyr Missile Launcher as a ‘count as’ Cyclone Launcher for Marine Termies).

CMON carries a good number of these companies, so that’s a solid place to start.

Very true, there are a lot of great, alternative miniatures resources out there if you know where to look.

Hi tech has been on a couple of other podcasts with their new Proturbo model.

They have some very nice models except their angels are winged angels. What’s with that.

Wargames Factory has some IG alternatives. Does Frontline carry or can get those?

We can get most of the small press manufacturers, but they often are low or out of stock of some of their items.

I mentioned a while ago that you should stock hitech. I’d like to rescind that statement. Their models are over the top with stupid detail you don’t notice at first. Gazzilions of skulls with sunglasses, random gears, a milion shrunken heads.

Even worse, out of nine models, 3 had arms that weren’t cured properly (felt like mushy rubber), and every single model had significant miscasts including “weeping,” resin down the whole front of the body, air pockets cutting off claws, etc.

When my first three arrived, I emailed them photos and asked for replacements. They said ok. I had six more in the mail and I was nervous. Of course when the rest of my order arrived the next day with all the same problems, I sent more photos and asked them to replace those as well.

At that point they said they couldn’t replace anything (including the first batch they said ok to) unless I mailed the models to them in Poland, at which point they would inspect them and let me know what they could do.. I said screw it, the models looked way worse in person than in picture and weren’t worth the hassle or shipping costs.

The above is referring to their “terrorizer,” (obliterator) line of figures. My advice: don’t waste your time or money with hitech.

Bummer, sorry you had such a bad experience. Thanks for the warning.

Hey stop giving away my secrets I am building these guys now in prep from A-Con.

Sorry, brotha! Haha, they looked too cool not to share.