You are here: Home › 40K › Antium V Narrative Campaign: The Stage is Set! 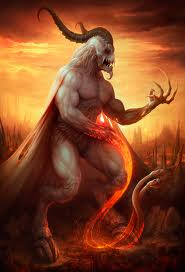 The forces of the Imperium and Chaos are poised to clash over the fate of Antium V! Check out this fluff piece by Raw Dogger, setting up the first conflict to be played out on Sunday. 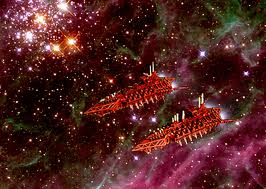 Sirens blared.  The command deck of the Imperial destroyer Emperors Wrath was illuminated in a nauseating red glow.  “Admiral Nomavitz, what is our tactical situation?” Inquisitor Rominov barked into the communication relay attached to his command consul.  A tiny high pitched voice answered back half a second later.

“Lord Inquisitor, the traitor marines’ armada has completely surrounded the planet and their engines are powering up.  They are getting into battle formation!”

“It appears they are as surprised to see us as we are to see them”, mused the Inquisitor.  Rominov slowly rose up from his command chair to address the command officers assembled at the foot of his command throne.

“What is the disposition of our forces, Lord Commander?”  Rominov was addressing a giant in gleaming silver power armor.  The commander of the armada’s ground forces, Lord Commander Talik commanded a contingent of the emperors finest warriors, the Grey Knights.  A monster standing nearly 8 feet tall in his gargantuan terminator armor, the commander exuded a confidence and steadfastness that came from hundreds of years of fighting the greatest horrors the galaxy had to offer.

“Our ships are outnumbered 2:1, my lord, but the enemy fleet is ancient and has seen the worst end of too many battles.  We should not have any trouble breaking through the armada and assaulting the planet.” A maniacal laugh cut off the Lord Commander.

“Assault the planet!? Are you mad?  Why don’t we scatter these dogs and bombard the planet into dust!”  The inquisitor forced down the urge to decapitate the impertinent officer. But no, that would not do, this man was too important to offhandedly execute.  Though, after the campaign would be another matter entirely Rominov thought with a slight grin.  The man who had interrupted the Commander was a slight, grey haired old man named Lord General Maximus Von Schtabb.  He commanded the Imperial Guard regiments the Inquisitor had requisitioned under his command.

“Lord General, as we have discussed while translating through the immaterium, destruction of the planet would result in a cataclysmic interruption of the Antium system’s warp gate.  The supply of the precious metals mined in this system would be forever cut off from the rest of the Imperium and that cannot be allowed! No, we cannot simply execute Exterminatus on Antium V. We end this filth here and now, with a decisive blow to the enemy.”

“Lord Commander, what forces do we have at our disposal?” asked Rominov.

Lord Commander Talik looked down at the data slate he was holding and replied, “As you know Lord Inquisitor, when Imperial astropaths felt the death cry of the people of Antium V we immediately knew the threat could only be the great enemy and their demon god filth.  We immediately called for assistance from any available forces in the region. Several Legion Astartes legion forces were in the near immediate vicinity, and they hailed our request for reinforcements.  They include companies from the Raven Guard, Space Wolves, Blood Angels and the Crimson Fists, along with their support forces.  We also have several Imperial Guard regiments, including several Bane Blade super heavy tanks, under the command of Lord General Maximus. My own contingent of Grey Knights will be there to deal with the demon presence and lend our hands in cutting down the traitorous scum who dare show themselves in the Emperor’s light!”

Rominov turned to a tall, skeletally thin old woman clothed in scarlet hooded robe.  The inquisitor’s personal astropath, Tor Vell, looked up at Rominov with the hallowed out sockets that were once her eyes.

“Tor Vell, have you sent the message to sector high command telling them of the situation here?”  The old woman nodded slowly.

“Yes my Lord, they have informed me they are sending reinforcements, but it will be several weeks until we can expect their aid.”

“We must strike fast, and we must strike hard.  We must take ground and continue to push until not a single traitor lives.  We will see some of the worst abominations imaginable on Antium V, gentleman, and I want you all to prepare your forces for what lay ahead.” The Lord Inquisitor gazed towards his assembled command staff, then out the viewport towards the distant rust specks making their way slowly toward the Imperial fleet.  Behind them lay the poisonous brown orb Antium V, a bright light in the overwhelming darkness of oblivion.  He spoke to the Admiral of the assembled starships.

“Admiral Nomavitz, prepare the fleet to sweep aside the enemy fleet.”  Rominov looked toward the towering giant in gleaming silver. “Commander Talik, prepare the ground forces for planetary assault.  We strike the main starport of Antium V.”

The assembled command staff made the sign of the Aquila on their chest.  “For the Emperor”, whispered Rominov.

← Dawn of War 3 News
Has Anyone Found a Use for the Rhino? →

8 Responses to “Antium V Narrative Campaign: The Stage is Set!”