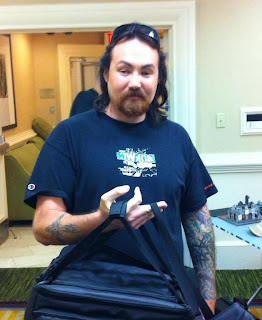 This evening I have an interview with Teddy Woody who won the highly coveted Warmaster award this year taking the top spot as our Best General. There was a lot of great players this year and I watched as they knocked each other out of contention. The second day was very intense as each of the three final rounds passed by one slowly after another. I had thought Teddy was done on the first day after losing an extremely close match in the second round to another Necron player. As fate would have it Lady Luck decided to smile upon Teddy when the one last undefeated player lost in the last round. Teddy won Best General by the slimmest possible margin of a single bonus point… It was just that close.

I met Teddy several years ago when he came down from Georgia to play in a tournament I helped run in Sarasota, Florida. He is a very easy going guy and seems to get along well with everyone. Maybe one day he will figure out my last name is Turner… heh !!

So let’s go ahead and get started now that the introduction is over.

Q1. My first question is what is your intent with the dark eldar army you won? I know some told me they were planning to sell it if they won it. Will you actually play any games with the army?

A1. I’m going to keep the Dark Eldar army, even though many other players would have sold it immediately. It’s a trophy, it not meant to be sold, its meant to be displayed, and played. I did play a game this week with my new Dark Eldar, had fun with it.

Q2. How did you go about developing your winning Necron army list? Did you have time to do a lot of playtesting?

A2. The developing of the army was basically watching and learning from other players’ mistakes. Nova was the best place for me to learn, a lot of Nercon’s players were bringing too many flyers on the board able to control the sky, but no troops on the ground. So, I needed to bring a balanced list, which was able to control the sky and the ground. The MVP of my list was Immotekh. His ability to control the night fight was a key element, and kept my units to survive and deny my opponents from shooting at me. To tell you the truth I didn’t play test this army at all.

Q3. What types of armies besides other Necron lists had you most worried? Did you face any of them and if so how did you go about beating them?

A3. I feared drop pod Sternguards….., but no one was playing them. The other army at the tournament I feared was blob squads of Orks, or even IG. I would have to focus all of my fire power into those units that could have up to 30 men per squad. The odd thing is that I didn’t play against any these type of army….I guess I was lucky.

Q4. I know there was a little bit of discontent from a few that the award did not go to an undefeated player – Other top players eventually knocked each other out of contention over the course of the final two games. How do you feel about winning the Warmaster award with a 5W-1L record and what were your thoughts on day 2 to stay focused on the top prize?

A4. Well, if you did the math at the beginning of tournament there could have been a 5-1 winner, due to the odd number. I believe that happen at Feast of Blades last year. I ask the TO, what was the battle points were going to use for. Got my answer… tie breakers [and Swiss pairings]. Going into the second day with a loss, I knew that I had to be on top of my game. This is year has been great for me as a 40k player. Able to get Best General in WarGamesCon in the RTT and then winning my first GT, that the achievement that every 40k players wants. This win was the icing on the cake. 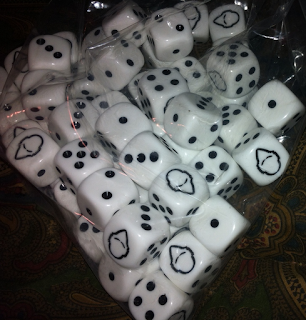 Q5. Tell us about your second game versus the Necron player. Looking back now is there anything you could have done differently to have won that game?

A5. The player name was Kai and I tip my hat to him, he was the only player that was able to defeat me in the tournament. Would I have things differently? Why yes, I would have played with more reserve, rather than aggressively. Kai played a great game, it came to one objective, shot everything and there were only two troops left. I would have won if was able to wipeout his unit, but I didn’t. So at the end we have to go to third tie breaker, 9-7 close game, Kai wins.

Q6. Who was your favorite opponent? Please tell us why.

A6. My favorite opponent was on the last day, last game Necrons Vs. Necrons, Scott Hutchens. Scott looks at my list and stated “I played this army already.” He did, the other Necron player that placed third had a similar list….and he was only one that defeated him. It was like Scott knew what the outcome was going to be, before the game started. We both had Immotekh and laughed to see how long can we keep the night fight going and who would strike with Immotekh ‘s Lighting. I also stated that we should hire someone to play with the light switch…. just for the effect of night fight. It was a great game even though it was one sided. Scott – it was a great game, had a really great time.

Q7. How did you like the overall system and rules this year? Do you have any suggestions for improvement?

A7. I like the rule that there was auto turn 6, this was key to my victory. The backup system, if we didn’t have an even number of players to get an undefeated player at the end of the tournament. I hope that next year, we will have a top player’s bracket, for players that do go undefeated in the first day and silver bracket for other players. Each bracket will have a prize, and you will have a true Warmaster at the end of day two.

Q8. Feel free now to discuss anything you wish that I haven’t covered above.

A8. Now there has been discussion on Dakka… Hulksmash and BloodofKitten about loaded dices. Look I don’t like drama and I’m too old for that shit. In any GT level tournament, you’re going to have players that are either asshole, rules lawyers, cheats, or just rage quit. I could talk about it, but I won’t. Steve Tuner and Matt ran a great tournament and I will attend BeakyCon3. This was my 4th tournament which Steve Tuner has hosted, never had a single problem from either TOs or from any players. I’m glad to see a GT here in the south. Y’alls did a great job, keep up with the great work and see y’alls next year.

This is BlackSunShine saying “Scouts Out’.

← Guest Editorial by Edwin: I Tabeled Draigowing, and I liked It!
Guest Interview by BBF with Gabe Dobkin from Beaky Con →