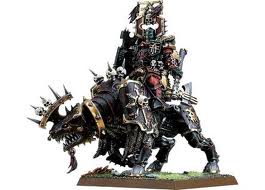 Hey everyone, I was curious as to what you all were finding to be the best HQ configurations in your games and talk abut some of my favorites.

So, Chaos is growing on us a bit. I am still really disappointed that regular CSMs are so bad (at least they still appear that way to me at this point in time) but the HQs are pretty awesome.

You guys have seen that I really like the Daemon Princes, but they are pretty dang fragile as a lot of you have pointed out. Whitedragon also noted that for about the same price, you can get a Blood Thirster who has better stats. However, a kitted out DP with a Daemon Weapon, while unpredictable, is pretty damn fun! I think in a true competitive build though, you need to go with the more predictable choice as that 1 crucial combat where the DP pokes himself in the eye instead of whipping ass can cost you the game.

The Khorne Juggernaut Lord, besides looking like a total boss, is also hell on wheels. I think a lot of folks will be using this guy. People like the Axe of Blind Fury for obvious reasons, but I prefer the Fist and Lightening Claw as they grant you a bonus attack for being specialist weapons, and it allows you to swing at your initiative with a Claw or at I1, AP2 Strength 8 with the fist. This is great as these guys will be in Challenges all the time. That versatility (and only costing 40pts) and the bonus attack stand out to me as the best weapon combo. The Boon table is bananas too, once you start racking up abilities, your characters can go god mode, fast.

I also really like the Slanesh lord on the Bike. Tough 5 allows him to not fear fists, and the I6 (again with Claw and Fist) allow him to get the drop on almost anyone in a challenge.

Frankie has really been liking the Nurgle Lord on Palanquin. He’s a resilient bastard, and packs a punch (again with Claw and Fist).

I am also really liking the Nurgle Sorcerer, level 3 with Spell Familiar on Palanquin. That is a tough as nails sorcerer with lots of versatility and packs a punch in a fight. With the extra wounds and Spell Familiar, he also doesn’t have to worry nearly so much about killing himself with Perils.

I have not had a chance to try the Dark Apostle or Warpsmith yet, and can’t speak to them. Honestly, outside of a themed list, I am not seeing the advantages they offer over the Lords and Sorcerers. The Warpsmith’s abilities are pretty boss, though, and I could see particularly his curse power being really good against certain units like War Walker and Venoms (or anything with high RoF, obviously).

Of the named characters, Kharn is awesome…until he fights someone who can one shot him and swings first. Not many models that can do that, but he is super vulnerable to that.

Abby is a damn tank, so good. His only weakness is the boon table and his Daemon Weapon (although the Claw is certainly the better weapon in almost every situation).

Typhus is pretty good, and unlocks a lot of cool stuff. I can see him in many competitive lists.

Fabulous Bile looks cool, but he hits like a wet noodle and when you factor him into the cost of upgrading a unit, it really isn’t worth it, IMO. Have you all had success with him?

I haven’t had the chance to try the others yet, but Airman looks promising.

What about you all? What have you been finding to work best for you?

Leave a Reply to Greg