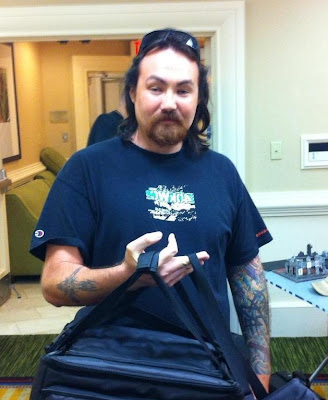 The Grand Tournament was held again at the Marriott in the Tampa international airport here in sunny Florida. Some flew into the airport and never had to step outside which I think is pretty cool. We had 64 players originally signed up with six rounds over the course of two days (three rounds per day) but had a couple drop right before the weekend. As fate would have it there was one undefeated player going into the final round but he lost his last game so we ended up with six players accumulating 5W-1L records. Bonus points were used to determine the final ranking (total aggregate of kill points, objectives held, First Blood, Slay the Warlord and Line Breaker summed from all six rounds).

Next year we are planning to increase the player base up to 96 with two final brackets to ensure we end up with one undefeated player. It’s ironic how it ended as so often there is a lot of heated debate on the Internet regarding whether a pure win-loss system or margin of victory (MoV) is the better system to determine who is actually the best general. We had planned on using total bonus points as a tie breaker to cover the case of such a contingency so in the end everything worked out quite smoothly. The irony is that it turned MoV was used to determine the top player… Advocates of MoV so often claim that this system allows any player to lose one game while still having a shot at grabbing the top spot which turned out to be the case. 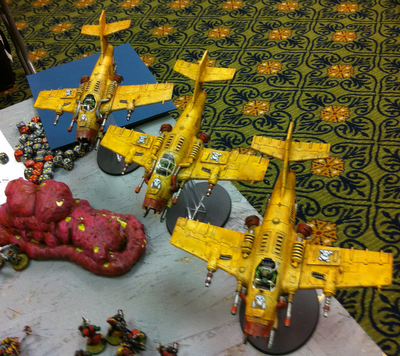 It’s obvious from the results that Necron flyer spam is one of the top (if not the top) armies in the current meta. Necron flyer based armies are highly mobile and can pour out a lot of high strength (S7+) fire power. They also have excellent dedicated melee units in the form of Canoptek Wraiths and Scarabs coupled with either Overlords or Destroyer Lords sweeping through the field. The two Necron armies that finished in the top three to eventually climb their way back to the top both featured lots of flyers and obviously racked up lots and lots of bonus points. Also note that the top Necron army suffered its one loss to another Necron flyer based army and that game came down to a very close hard fought tie breaker on the tertiary win condition.

There was only one Grey Knight army in the top three (taking second best general) and it was quite an interesting list featuring lots of Grey Knight fire power coupled with Imperial Guard as its ally. Note that this army did not feature any flyers. This player suffered its one loss to one of our youngest players (John Lennon) fielding Tyranids which eventually ended up knocking the Grey Knight player out of contention for the top spot which was also quite ironic in its own way. 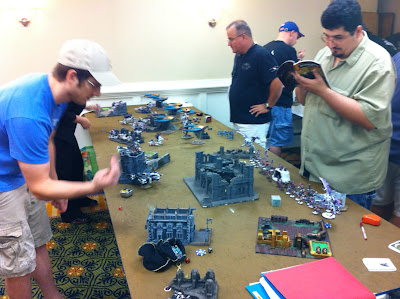 There were some other exotic lists such as Marc Parker’s ork horde army which did quite well along the way until finally losing to the same Tyranid player mentioned above. Another army I think worth mentioning that did well was Kenny Boucher’s (Next Level Painting) daemon army that only had one one flying monstrous creature (Fateweaver of course) and lots of Flamers and Screamers. This army also did quite well until finally losing to the Grey Knight army mentioned above.

Note – I played a pick up game during the Friday evening preceding the GT versus this army with the professionally painted dark eldar army (by Next Level Painting) we gave away as the top prize playing an objective based mission and was crushed. It really brought home to me just how powerful are Necron flyer based armies as I could do nothing but play run and hide most of the game while the Stormlord’s lighting continued to rock my puny xenos world over the course of the majority of the game. I was playing a fun raider based army with two Voidravens, Reaver jetbikes plus Vect and Drazhar leading a small squad of Incubi mounted in a Venom. Necrons in general are very resilient and their flyers can easily match the speed of dark eldar… It proved to be too tough of a match up for my dark eldar and I don’t think I would fared any better in a kill point or table quarters based mission. Drazhar and his Incubi did manage to shred one squad of Canoptek Wraiths (in melee obviously) – that was the one highlight of the game for me. Oh well you can’t win ’em all. I’m happy to see the dark eldar go to someone who will enjoy playing the army. I’d be hard pressed to think of any major event that handed out a better prize – this one came with two carrying cases from Sabol along with the codex. : ) 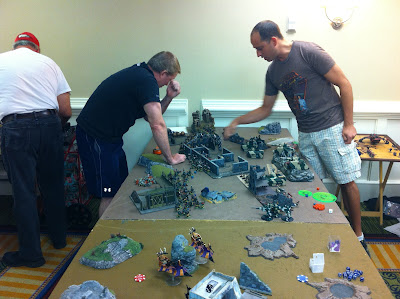 This was another interesting army as well and generates lots of fire power. I didn’t get to watch its demise to the Hive Mind and I’m sure that must have been a very intense game.

So there you have it… Another year has gone by and I’m already looking forward to the next one!

← Are you all Enjoying Chaos so Far?
Cron Air vs Speed Freak Orks 1750 BAO Practice Game →