40K Tactics: The Future of my Orks? 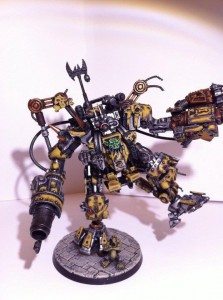 Here’s a list I had a lot of fun with in 5th, tuned up for 6th…but will it work?

Yes, a Trukk list. I love the idea of Orks flying around the table in Trukks, going crazy. In 5th it worked really well for me, and if I went first against a lot of armies, it was good night. The question now though, is will it transition into 6th?

With Nob Bikers getting owned (and honestly, I am glad they did, the game is better for it) I was considering just going all Warbikers, but that would require a lot of buying, building and painting. Why not make due with what I’ve got?

I haven’t had a chance to try it out, but I think it would still work, honestly. Trukks have 3 HP which actually makes them better than before defensively, as a glance can’t kill them. Being assault vehicles they can still be charged out of, although only being able to move 6″ if they do so is a bummer.

Slugga boyz aren’t what they were, but attacking en masse, they aren’t bad. The key is not attacking hings you can’t fight, but running from them like a true Ork!

The big Guns, Quad Gun, Aegis line and Lootas forms a nice hard core of shooting. Nothing crazy, but enough to make folks put their heads down.

What do you guys think? Has a chance or none at all? I have the models, I want to give it a run!