A gust Bat Rep from our friend: BBF!

So I decided to test one of my builds this past weekend I’m considering bringing to Comikaze Con in LA this coming September.

Here is the daemon army I was up against…

We played the BeakyCon2 sample mission Blood in the Sand… 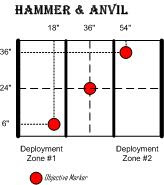 Three objectives were the primary mission with killpoints as the first tie breaker and victory points as the second tie breaker. Deployment was Hammer and Anvil. My opponent won the roll to choose his deployment zone (DZ) and to go first. I deployed my three squads of Purifiers in a castle way deep in my DZ to force his flying monstrous creatures (FMCs) to come in far away from the other objectives. I get the Warlord trait that is -1 to enemy reserve rolls (not bad)… His is useless.

His first wave is Fateweaver, Bloodthirster and one Tzneetch Prince. He gets his first wave and deploys cautiously putting his daemons 24″ or more away from my castle. My turn I pop smoke on my rhinos.

Second turn in come the Bloodletters on the far objective plus the second Tzneetch Prince. The first three FMCs all move up and wreck two of the rhinos (First Blood). My turn in comes the Nightscythe transporting the Warriors and Destroyer Lord. Purifiers move behind wrecks and focus fire on the Bloodthirster dropping one wound. Nightscythe goes balls to the walls pulling up beside the Bloodletters… Destroyer Lord disembarks and Telsa destructors drop three daemons. 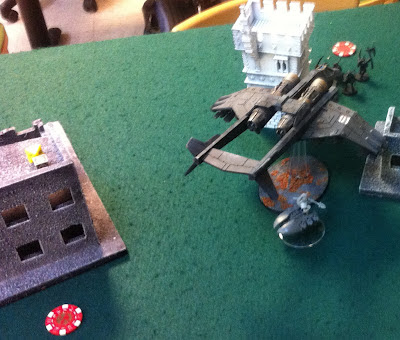 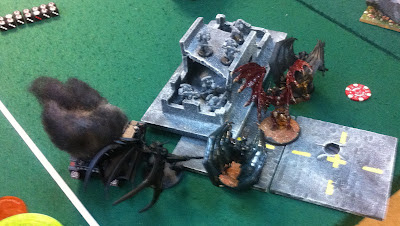 Fourth turn FMCs toast the Purifiers. My Stormraven finally arrives and goes flatout to keep out of range of bolt the next turn. Doomscythe and Nightscythe both fly off the table. 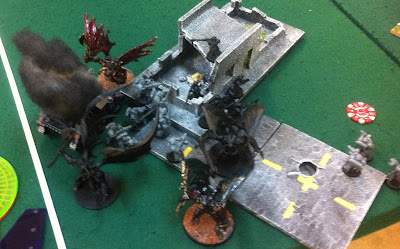 Fifth turn my opponent realizes he has no scoring units and must split up his FMCs to deny objectives and hunt flyers. My turn on comes the two scythes again that zoom flatout out of range from the FMCs. Stormraven goes into hover mode and shoots down one Tzneetch Prince.

Sixth turn (automatic for BeakyCon2) the rest of the FMCs spread out again to deny objectives and are still out of range of the Stormraven. Scythes zoom off the table again hoping for a seventh turn. Stormraven drops another Tzneetch Prince.

Two FMCs are left with one sitting on the objective in my DZ and the middle one. Nightscythe zooms up to the middle objective and Warriors disembark. Stormraven pulls up in hover mode and Crowe disembarks to assault Bloodthirster if he crashes. Doomscythe also comes in to blast greater daemon. Lots of shooting… Bloodthirster crashes but only suffers one wound. Here is the best part – a Tesla arc goes off and kills Crowe before he can assault… Just my luck. I rolled to see if he would have killed the greater daemon with Heroic Sacrifice and sure enough he would have. So I then decide to charge the greater daemon with my Destroyer Lord and forget to use his MSS… geez.

A good game overall and I’m liking the Crowe Cron combo. Not bad at all for the first time out in my opinion.

So what are you thoughts on this type of army? Honestly I really like it and think it will scale up well to 1850+ points.