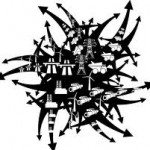 This is a great piece of fiction getting us ready for our upcoming narrative campaign.

It started with a pulse as feint as a heartbeat.  It was an energy discharge so small as to go unnoticed by the entire population of Antium V.

A valuable mining planet that provides the necessary metals for the nearby Mechanicum Forgeworld, Tallexum Prime, Antium V was the crown jewel in the entire Antium sector. Who could have known that an event so small and seemingly insignificant could herald the death of an entire world?  Hundreds of billions of lives snuffed out in a single, agonizingly desperate moment.

A woman screams in agony in a poorly lit, dank basement as her husband looks on in pained anguish.  A bespectacled doctor does his best to make her comfortable but knows the awful truth: She will not survive this birth.  Does she know what will become of herself?  Does she know the creature that tears through her womb?

Desperately clawing and chewing its way out of its prison of flesh, the creature opens its eyes for the first but not the first time.  He erupts from her womb in a shower of gore and flesh.  As he screams his triumphant birth roar the doctor’s flesh quivers and ruptures.  The father stares on in horror as his own flesh begins to boil and melt.  The demon T’elnoth smiles in triumph, his eyes glowing with unimaginable power.  As the billions of innocents cry out in horror as their flesh melts and their souls are devoured, a psychic beacon erupts into the maelstrom drawing the insanity of the warp to the world of Antium V likes syphilitic moths to a virgin flame.

As if on some horrific cue, the space around the dying planet blossoms with the brightly colored contrails of ships exiting the maelstrom into real space.  The rust colored prows covered in blasphemous symbols and ancient prophecies can only herald the arrival of the traitor legions Space Marines.

Hateful and distorted parodies of their heroic kin, the traitor Marine legions live for nothing other than their own selfish desires and the utter annihilation of the empire of man.  The traitors, having made dark pacts with the ruinous entities now clawing their way into existence on Antium V, are now keen on beginning their operations of mass rape and slaughter in the nearby worlds of Antium III and IV.

Across the sector, Imperial astropaths scream out in horror as their minds are all but destroyed by the psychic backlash caused by the cataclysmic deaths of the billions of souls on Antium V.  On the nearby shrine world of Caelium II the sisters of the sacred Order of our Martyred Lady wept tears of anguish as the statue of St. Celestine weeps pus and vomits blood covered excrement across their holy altar.

Imperial preachers throughout the sector begin to speak in tongues, babbling incoherently until they bite of their own tongues. Contact with a reconnaissance fleet sent by the Imperial Navy to investigate the sudden loss of communications with the planet and surrounding space is suddenly lost.  Sector command puzzles over the garbled communications of one Inquisitor Rominov of the Ordos Malleus, who was sent with the fleet to investigate possible daemonic incursion.