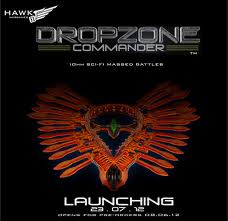 A guest Editorial by Sean Ireland

A busy summer helped pass the time to what I think should be everyone’s most anticipated release so far this year, Dropzone Commander by Hawk Wargames.  If you haven’t seen anything on this new game, it’s design goals are a quick moving game that is focused on out maneuvering opponents through the use of dropships to rapidly deploy (and redeploy) your forces.  I’ve been enamored with this game since I first saw the models earlier this year.   Last week I was able to get my hands on a rulebook and some models.

I decided to try the Post Human Republic, or PHR, as a starting faction.  There are four starting factions, and based strictly on looks the PHR seemed like the army for me.  I like the somewhat Tau like clean lines of the models and they have walkers.  Having been a Battletech player in my gaming formative years, I find myself always drawn to factions that have walkers. 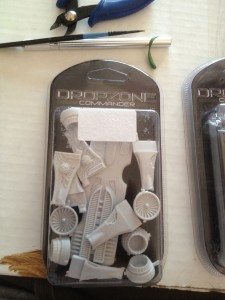 The blisters on the outside appear to be a high quality material.  I really like how you can inspect the model, it isn’t hidden behind the foam, and really see what you are getting.  It took me a few blisters to figure out, they aren’t sealed as they appear, you can actually pop them open without tools.  This blister is for my large drop ship model. 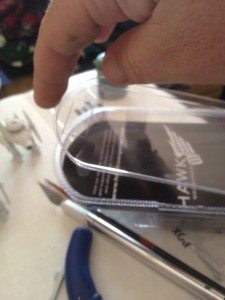 On my first few blisters I cut off the edge of the blister on this first blister, before I figured out you can just pop them open like this. 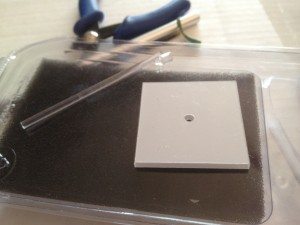 The flying bases the models use are very different than the Games Workshop bases most of us are used to.  For one thing they are square, and are a completely different plastic.  They are designed so that you can glue in a stub portion, and the base goes into that, so that the pesky bases broken in models problem is a thing of the past.  As a note, the bases don’t have white on the bottom, they have a protective plastic on them and I haven’t taken it off yet. 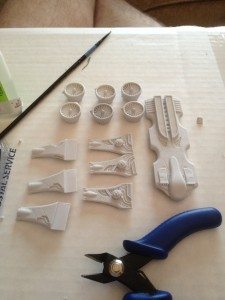 Here is the model laid out in the various parts.  There are no instructions, though I doubt anyone experienced with models needs instructions.  I did have to reference the core rule book to make sure I put the engine pylons on the right way. I continued to use the rulebook in this way for all of the models I assembled, as some of the parts can go in the wrong places or the wrong direction if you are not careful.  The details on these models cannot be oversold.  The casting was done really well, I didn’t see any miscasts on this model and the resin appeared to be firm and uniform in color and texture. 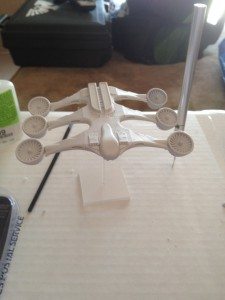 The finished drop ship.  I didn’t glue it into the base stub piece, as I’m still decided what scheme to use for the paint.  I like the standard PHR pattern, though I think I might do something different, more of a camouflage pattern. 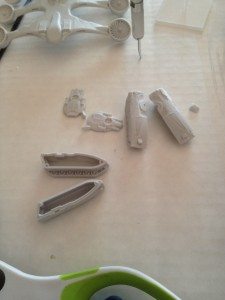 These are the infantry fighting vehicle.  These tanks have main guns, and carry troop stands.  Very similar to a Razorback from Warhammer 40,000.   These are a variant that have anti infantry guns on their turrets.  The model’s components are split in two halves.  These models did take a bit of trimming to get the halves to go together, due to heavy flashing on the rear portions. 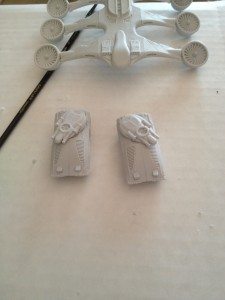 These models, even with the flashing issue, came together very quickly.  I am very impressed with this resin, and apart from one problem model I encountered later on, Hawk Wargames is doing much better than some other companies with casting their resin, even being the new kind on the block. 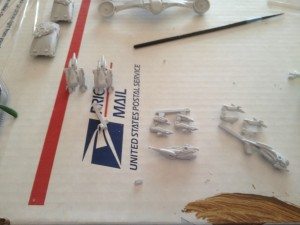 I next assembled some scout walkers.  These models help other ones in my army hit their target, so I knew I needed at least one group of them.  These models are the first walkers I put together.  I did have a small issue with these models and their leg positioning so that the model stood flat.   As you can see, you don’t get bases with Dropzone Commander so models such as walkers, have to have their feet flat to stand right.  I may end up putting the on some small square bases, similar to how I used to base some of the old Epic models. I also found my first miscasts, some very small bubbles, mostly in the feet. 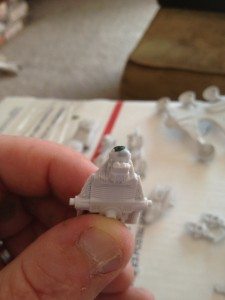 This model was the one I had a problem with.  The model is a command model, a headquarters unit on a walker platform.  The casting on the nose of the walker was horrible; it was completely hollow and had a huge bubble.  Luckily Games Workshop makes liquid green stuff, due to their infuriating inability to cast anything with miscasts, so it wasn’t too hard to fix.   If this was a Games Workshop model I would have gotten a replacement, though in this case I am willing to forgive Hawk Wargames and just fix it. 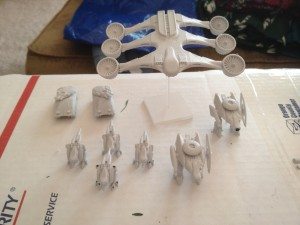 Here are all the models together.  This is a small sample of the total models in an army, and not even a starter size force.  These models look even better in person, and so far the rules seem to back up the quality of the models.  The rulebook is a first article, there are a few typos and a few items that are not 100% clear, though not as much as other games that are way beyond their first edition.   Hawk Wargames has created an intriguing new system at a scale I had previously discounted.   If you have a chance, take a look at the rulebook yourself, and I would bet you’ll have a hard time putting it back on the shelf.

Posted on August 18, 2012 by Reecius in Dropzone Commander, Editorial, Modeling

← Starter Box Revealed!
Signals from the Frontline Will be Late Today →