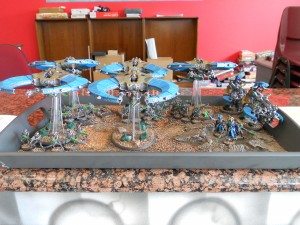 OverwatchCNC  from Capture and Control on Building, Painting, and Playing a Necron Airforce. 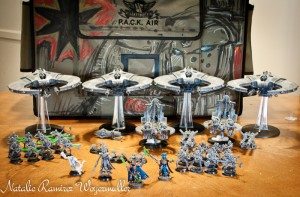 Overwatch from captureandcontrol.com here.  Today I am going to talk about Necrons and their feared airforce.  If you follow capture and control you probably already know how I set a goal to paint a 1500 point Necron army in 5 days, and succeeded!  But here I want to talk about more than just painting it, here I want to explore what I learned from building, painting, and playing the army.

Building the Necron airforce is actually much simpler than I thought it would be.  The meat of the army is clearly the flyers and the Necron flyers are the easiest to put together that GW has come out with.  The Valk/Vendetta kit was a headache as was the Stormraven but the Night/Doomscythes couldn’t be easier.  Because of the ease to put together I don’t have any tips to help you build them faster but there are a few things you should consider when building because it will make painting them 10 times easier.

1. Don’t attach any of the weapon systems or the portal.  Build them, and fit them in place but leave them separate so you can paint them separate and attach them when everything is painted.  Trust me, this will keep you from getting some major cramps in your hand trying to reach places with a brush that, while hard to reach, are easy to see.

2. Don’t attach the sensor nubs on the sides of the flyers.  These little, slightly spikey, bits are actually more of a pain than you’d think.  It is much easier to paint that small, slightly recessed, rim that goes around the outside of the scythe without the nubs attached.  Paint them separate and attach them when you attach the weapons.

That’s it for tips on the flyers.  Easily my favorite GW kit yet, well maybe next to Space Wolf terminators nothing beats the sons of Russ, for multiple reasons.  When building the list you’ll need to decide on support options.  I chose Necron Warriors for troops because of their cheap price tag, and 2 Annihilation Barges plus a Doomscythe for heavy support.  Why not go triple Barges or triple Doomscythes?  Because you need flexibility in the list and Doomscythes are super expensive pointwise at 1500 whereas Annihilation Barges are cheap and survivable.  For the Annihilation Barges I suggest you leave the Twin Linked Tesla Destructors unattached to the Barge.  Again this will make painting it much easier plus it will make it easier to remove when you lose the weapon during a game. 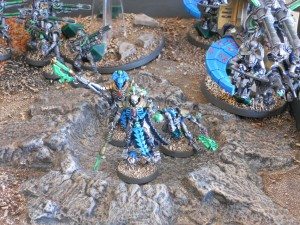 Painting Necrons is easy.  Making them look good is not as easy.  You can of course just buy Silver primer and then wash everything and be pretty much done.  That was my first step with the infantry models after all!  To make the army really pop though you’ll need some additional steps; but you can still get the army done fast if you do it right.  Choose some colors that really pop.  For me I went with Turquoise/Teal with Gold and Silver as the main colors but used quite a bit of Green and bright Red for accents.  The red on the blue looks very striking and draws eyes to the models, which is good.  Once you have decided on colors pick up some of the Army Painter spray primers for the base colors.  These have excellent coverage and take out 2-3 steps from the beginning of painting any army.  I used their Ultramarine Blue and Mithril Silver equivalent sprays for this army.  Washes are your best friend if you’re trying to paint fast.  Some people don’t like the new GW washes as much as the old ones but I really see very little difference aside from Agrax being slightly darker than Devlan was.  Oh well, I can live with that! 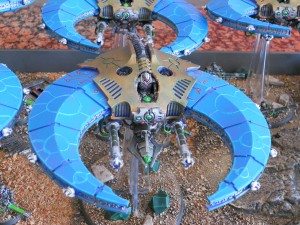 In an army with monotone infantry like Necrons it is important to pick out some details in bright colors, highlight the bright reds and greens etc. after washing them so they pop next to the washed and duller metallic tones.  Spend extra time with drybrushing and highlighting on the vehicles.  The Scythes and Barges are the centerpieces of this type of army, make sure they look like it!  People will be drawn to an army with 4+ scythes simply from the models, but when those models pop with color and look good up close you’ve got a real winner on your hands.

Playing the army is not as easy as the internet will make you believe.  While the flyers are forgiving if you make a mistake the minimal troops and other options you have will not stand up to you making a mistake with them.  The flyers do the heavy lifting in the list.  Tesla weapons but out a stupid amount of firepower and the large number of shots does a great job mitigating the lack of AP.  If the flyers are the key to the list then you’ll need to keep them safe and alive.  Keep track of any units your opponent may have that possess the Skyfire rule and go after them early.  If possible use the Barges to take them out or put the hurt on them turn 1 before the flyers even arrive, especially if the unit also has interceptor.  Also remember to take out your opponents flyers with your own early in the game.  If you run up against 2 Stormravens then your target priority number 1 are those two models.  Do everything in your power to make sure his/her flyers arrive before yours. 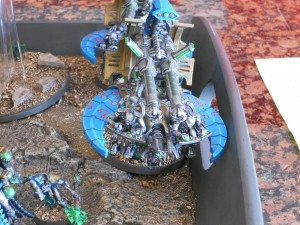 The next most important thing to remember when playing flyers is to get them off the board early.  It is tempting, especially in Hammer and Anvil, to try and keep those flyers on the board as long as possible but if you fly them off on turn 5 and the game ends then some bad things will happen.  First you won’t get the chance to move them back on and if they have a claiming/contesting unit on board then you’ve now missed the chance to jump on an objective.  Second they will count as destroyed, as will the unit embarked upon them, so if you’re playing Purge the Alien you just screwed yourself out of some major VPs.  I like to move my Flyers off turn 4 whenever possible so I can move back on in 5 and maneuver to remain on the board in 6.  The list is by no means a win button but with smart play it is easily one of the best builds out there right now.  We’ll see after the next 2-3 codices and White Dwarf updates if more skyfire is introduced to the game, if so we may see the dominance of Necron Airforces take a slide, I hope not, but I am sure it is almost inevitable!  Thanks, I hope you enjoyed and if you want to see more in depth articles about my 5 day Necron Army project or the army in action check captureandcontrol.com now and in the coming weeks for some battle reports.