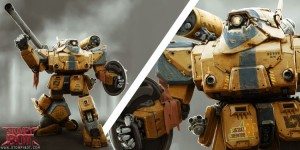 For those of you who played the old Activision Heavy Gear games in the 90’s this will be exciting news!

The Heavy Gear® franchise has released dozens of sourcebooks detailing the settings, people, and machines of the Heavy Gear® universe. The first Heavy Gear® computer game, titled Heavy Gear®, saw light in 1997 and its sequel, Heavy Gear® II, was released in 1999. An animated series was also aired in 2001. The Heavy Gear® game line includes an innovative mix of RPG/wargame books, card games, miniatures and other products.

“We’re very excited to bring Heavy Gear® back to the current generation of gaming fans,” said James Taylor, President of Stompy Bot Productions. Robert Dubois, President of Dream Pod 9, said “Dream Pod 9 looks forward to working closely with Stompy Bot Productions in developing the next incarnation of Heavy Gear’s 3D video game. Stompy Bot has the drive and talent to bring the world of Heavy Gear® to life for all of our fans and a whole new generation of gamers.”

Dream Pod 9 (also known as DP9) is a Montreal-based Canadian game publisher. In addition to games, they have been known to work on special projects, creating worlds and stories to order for a variety of clients.