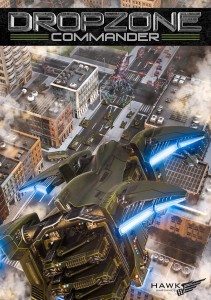 Hey everyone, we got our Dropaone rule books in two days ago and I have been reading the book and wanted to talk about my impressions so far.

First of all, this isn’t an in-depth review, that will come later. Also please note, I have not played the game, yet. This is all theory.

This is my first impressions of the game after having given a cursory read-through of the rules. I am a fluff guy at my core, but the rules are what make or break a game, and the fluff is a largely subjective consideration. I will say that the story of the game is pretty cool, based largely around the UCM and their upcoming crusade to liberate their home worlds. The units all sound appropriately bad ass, and the setting is much less grim-dark and much more upbeat and high-tech.

The art in the book is excellent and the diagrams are all very useful. There is no index though, which sucks.

They are fast paced, simple and largely intuitive. The game requires far less die rolling than 40K for example, and seems to move at a quicker pace. For example, you roll to hit based on a fixed characteristic of the weapon itself (a 2+ for example), not the model firing it, and then compare it’s Energy to the target’s Armor, much like 40K’s Strength/Toughness ratio. If your energy is equal to the target’s armor, it is a 5+ to damage it, and it scales up or down from there. For example, if your energy is one below the Armor of your target, you damage it on a 6+ (and you can’t hurt a target beyond that).

Weapon ranges vary depending on the target you are firing at. Most weapons, as in Heavy Gear, have unlimited range which makes sense from a realism perspective. However, in order to not have the game be a shoot-out, the introduction of the countermeasures rule means that units with countermeasures (most of them) will limit your weapon ranges. So, each weapon has a range against these types of weapons as well, typically 6″ to 24.”

Most of the units in the game are pretty slow, too. For example, the average speed of a MBT is around 5.” That tells me the game designer wants you to engage each other at close ranges. The fact that they essentially require you to have a large number of LoS blocking buildings to play the game combined with relatively short ranges means that the game is going to be about maneuver, which is awesome.

Most of the scenarios revolve around taking buildings and then finding the objective within them (on a random roll that gets easier the smaller the building and the longer you are in it). I like this mechanic as it allows you to have the drama of not knowing when you will get the objective. That’s the kind of random I like. The rest of the game seems to revolve around either delivering your troops into the buildings to seize objectives and defending them as they do it, while stopping your enemy from doing the same.

The units themselves are very rock-paper-scissors. Every army has essentially the same units (Main Battle Tanks, Heavy Tanks, Air, Support, Scouts, Troops, Special Forces, Tranports, etc.) but they differ from one another pretty significantly in how they function. This creates the diversity in the game while keeping it fairly even, at least at a glance.

For example, every army has their troops to take objectives, their special forces that kill troops, their APC’s to deliver Troops, Drop Ships to move everything, Air Support, AA, etc. They simply differ in their stats. This looks like it will be a lot of fun, and easy to grasp.

The Drop ships themselves are really fast for the most part. They allow you to rapidly redeploy your forces across the table which I think will make for a very fast paced, dynamic game.

I am very excited for this game and think it looks excellent so far, but only play-testing will be able to determine that for sure.

Posted on August 8, 2012 by Reecius in Dropzone Commander, Editorial