The Manly Art of Fisticuffs in the 41st Millennium: an Addendum

You are here: Home › 40K › Tactics › The Manly Art of Fisticuffs in the 41st Millennium: an Addendum 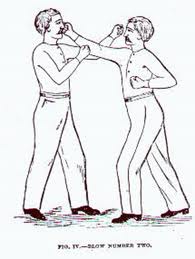 After some discussion, I wanted to include this add-on to our discussion form Wednesday.

As often happens, listening to some of the ideas put forth by members of the community after my article last Wednesday, some new and interesting ideas came up. I wanted to share them.

A gentleman on BoLS (I’m sorry, I can’t recall your name) pointed out a VERY big point with challenges that I (and most folks) had missed: you can only accept a challenge if you are engaged in that combat!

What this means is that if you keep your Power Fist Sarge (as an example) more than 2″ away from a combat at higher initiative steps not only can he not be hit, but he can’t be picked out in a challenge. This is awesome as it means you can then pile-in at his initiative step and get his attacks off. Brilliant!

Now, this isn’t as easy to do as it sounds, particularly in smaller squads. But, in large squads, like with Ork Boyz, this is definitely a viable and reliable tactic. This is a really important skill to master and yet again drives home the point that you need to be an expert at model placement.

Another point worth bringing up is precision strikes. We covered that in the previous article, but a point I didn’t touch on enough was how useful it can be to precision strike key models out with your higher initiative attacking characters. Dropping that Wolg Guard in Termie armor with a Harelquin Shadowseer or a Captain with Lightening Claws is a great way to remove the tank from a squad. Now, with an invul save, LoS! and only getting precision strikes on 6’s it isn’t reliable, but it is something you can do to even the odds. And, as with challenges, only models that are engaged can be hit with precision strike, meaning that you can again shield key models by keeping them further back in a squad.

I am curious to see how far down this rabbit hole goes, the further into 6th we delve the more and more intricate the rules are and the more I see that this is either the work of some smart dudes, or a huge coincidence. I still really dislike some of the rules (random charge length, I HATE you!!!), but I am gaining more respect for how much this rule set benefits the skilled player.

What are some of the other things you guys have noticed about assault?

13 Responses to “The Manly Art of Fisticuffs in the 41st Millennium: an Addendum”